The witch with a sweet tooth is back in this port of the third game in the Cotton series and the only entry to be released on the Sega Mega Drive. Released back in 1994, this Space Harrier-esque rail shooter originally only saw a Japanese release, making this new release the first time it’s been available in the West. 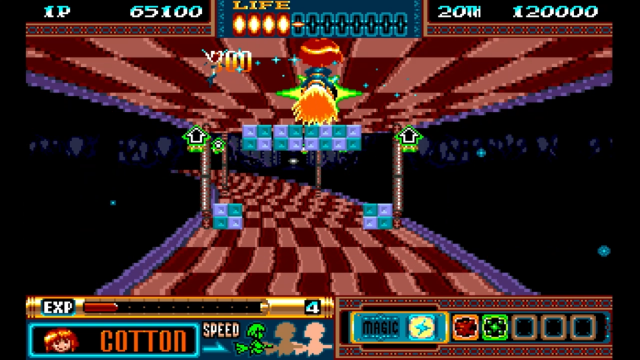 Cotton and her fairy friend Silk set out to help Queen Velvet after discovering that a burnt Willow, the curiously sought-after magical candy in the Cotton universe, is the cause of her odd behaviour. That help takes the form of shooting your way through five stages of technically impressive visuals with the assistance of Silk as you try to save the kingdom.

The first thing that strikes you when you play Panorama Cotton is the visuals. The game utilises an into-the-screen approach much like Space Harrier or the Super FX chip-harnessing Star Fox. Impressively for a Mega Drive title, it creates visuals that are reminiscent of the clever scaling effects associated with the SNES’ iconic Mode 7. The fact that it does so, often with new tricks of its own like some nifty fake 3D, without any extra hardware is a testament to the skill of the original game’s developers.

The gameplay itself is fairly straightforward for a rail shooter: Dodge enemies whilst taking out enemies with your magical blasts. You can alternate between three speeds for your broom as well as utilise powerful magic which you collect from coloured crystals obtained from certain enemies. Like other Cotton titles, you can cycle through the magic types by shooting the crystals before you bump into them, with the standard yellow crystals filling an experience bar that provide stronger magical blasts.

Five stages might not sound a lot but they are quite long individually, with most of them providing alternative routes via pathways that go into the floor and ceiling at various points. Unfortunately, the enemy designs outside of the bosses are pretty forgettable, but those bosses more than make up for it. The stage three miniboss that you take down by shooting the appropriate “Rock, Paper, Scissors” symbol rather than mindlessly blasting them is a highlight! 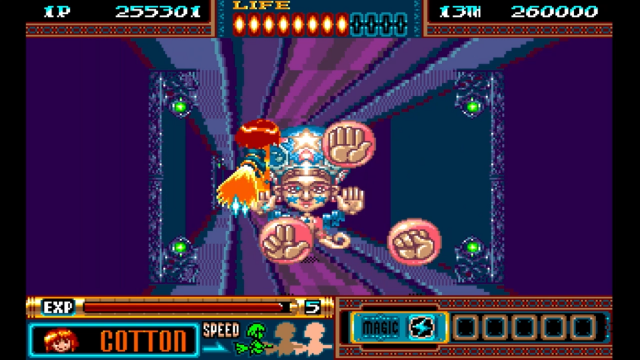 This release of the game is emulated well, developed by the same folk responsible for the recent Gleylancer port. It includes some useful extras, from the ability to use save states and customise controls to the now obligatory rewind feature. These are all nice things to have and it also has a really customisable optional CRT visual filter which can really help take the edge off those sharp pixels.

Unfortunately, the one major negative this release has is that no effort has been made to translate the intro and ending cutscenes, which is a massive shame and a bit of a missed opportunity with it being the games first appearance outside of Japan. They do have cute animated storyboards to go with them so you can still get the gist of events, and it’s not a detriment to the gameplay itself, but it is worth noting. 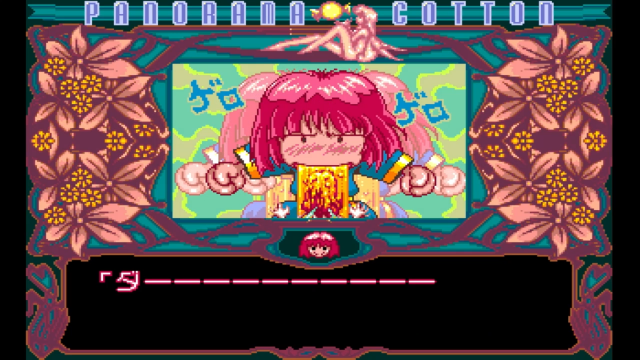 Panorama Cotton is a fun game, and one not a lot of people will have played before; I’m always pleased to see previously Japan-only titles become available in other regions. Whilst it’s a shame the small amount of Japanese hasn’t been translated here, it doesn’t hamper playability at all.

As a shoot ‘em up, it’s fairly straightforward and doesn’t have an intricate scoring system or anything like that so replayability is relatively low, but it is extremely charming and the impressive visuals for the time make it a fun game to return to.

An entertaining and charming rail shooter that finally makes its way to the rest of the world. The lack of a translation for what little text it has harms the overall polish but it’s a fun way to spend time with Cotton and her friends.