It’s time for the Origami Festival, and Mario & Luigi have been invited! But when they get to Toad Town, they find it deserted. Heading into Peach’s Castle only brings more questions - and danger!

Paper Mario: The Origami King is the latest in the RPG franchise from Nintendo, bringing it to the Switch. The last few weren’t regarded particularly well, with the 3DS game Paper Mario: Sticker Star being a low point, but we’ll see whether this is an improvement or not.

I’ll admit that while I haven’t finished all of the Paper Mario titles, I have played them all, including most recently Color Splash. It’s always a humorous series to play with an adorable art style.

The Origami King continues the tradition with the signature funny moments, as well as a well written cast of characters joining Mario. These include Olivia, the titular king’s younger sister who is aiding the plumber in his quest to rescue Princess Peach. She believes that origami and flat paper people can both live in harmony together, whereas her brother - King Olly - believes in origami superiority. Yes, a little “oof” in the current climate, but Color Splash had Mario literally fighting Black Bowser, so…

Anyway, the McGuffin for The Origami King is that Olly has turned Peach into an origami version of herself, and kidnapped her, castle-and-all. It’s covered with streamers, so you can’t get inside without destroying the streamers. Unfortunately, each one is protected by a Vellumental - an origami construct which wields an element. Luckily, Olivia can read a book and turn into the Vellumentals, aiding you in your future boss battles.

Since there is so much to like about this game, I’ll fit this in the middle - the battles. New to this iteration is the battle circle. When you attack/are attacked the enemies spread before you on the circle. You then have a couple of moves to change their layout, either to line them up in front of you, or have them two-by-two. The first is so you can jump or use a flower item, the second is for your hammer or tanuki item. If you line them up, you get a bonus to power. After you’ve used your action phase, the enemies attack and then move around the circle again, so that you have to repeat it. 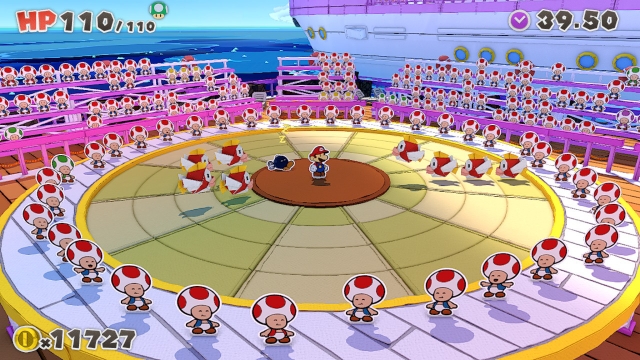 It’s certainly different, but quite annoying. You can’t just bash through battles - unless you have money. Now, I will admit that the coins flow very freely, and before the end of chapter one you can have many thousands of coins. That’s because they’re used to buy battle items, of course, but also to add seconds onto the timer and pay Toads to help you out. Yes, I forgot to mention that you’re timed when on the “moving” phase. But as you rescue Toads (all of whom have been turned into origami flags, balls, etc) you can get them to help you. You can spend up to 999 coins per battle, which will bring Toads to the edge of the battlefield to throw things at the enemies, powerups for you and also move the enemies into the correct formation.

All of this changes, however, when you’re in a boss fight. Instead of the enemy being on the outside of the circle, it’s you. And instead of moving the boss, you have to move yourself. Dotted around the battle circle will be health, coins and arrows - hitting an arrow will alter which direction you’re running in. Your aim is usually to land on the action symbol which will allow you to attack. Each one has a gimmick, of course, so you have to pay attention. Olivia can turn into any Vellumental you’ve defeated to do a super attack. Also, you’ll need to use the 1,000 Fold Hands, depending on if you hit the right symbol. All told, boss fights are far too long and far too frustrating, especially since stronger weapon items do the same amount of damage as normal ones. 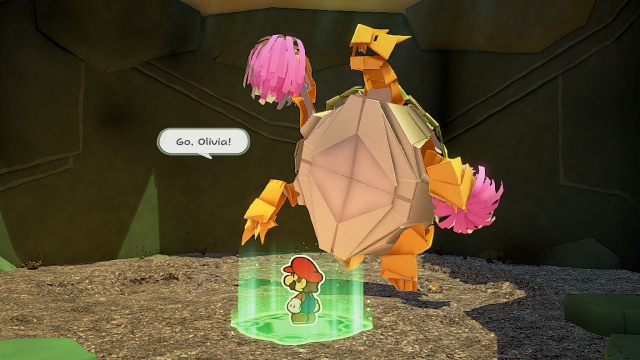 Now I haven’t mentioned 1,000 Fold Hands, but you unlock them early on. Olivia basically gives you temporary big origami hands which allow you to do special attacks in boss fights. They also let you interact with the environment, usually to solve puzzles. I was quite worried when I unlocked them and it told me to move the Joy-Cons to control the arms - I was playing on the Switch Lite. Luckily, you can disable movement controls, and it will let you hold the trigger buttons insead.

Another new gimmick - this one replacing the “paint things” one from Color Splash - is the confetti bag. There are giant origami enemies walking around, it turns out not just to get in the way, but to apparently eat the world. You’ll see plenty of spots which have been nibbled, showing once and for all how the world can be entirely paper. It’s all built on scaffolding. So you have a bag of confetti that you chuck at the holes, and it fills them in. Refill the bag by defeating enemies, hitting flowers, trees, the usual stuff. It still makes me giggle, seeing Mario toss loose paper into the air, and seeing if it needs another couple of handfuls to completely repair it.

One new feature that I was very impressed by in Paper Mario: The Origami King was healing. You no longer have to walk around with 30 mushrooms in your pocket to heal between fights - you can sit down. There are benches scattered around the place, or the occasional coffee shop, and you can just sit down which will recover your health fully. It’s different from using items or regenerating health for no obvious reason, and quite welcome.

As you explore the world you will find treasure chests hidden in out-of-the-way areas, which contain collectables. These don’t do anything, but they’re something interesting to check if you want a break from near-constant fights, running from fights or getting lost. A minor problem that The Origami King has is that you’re not always told exactly where to go. You can ask Olivia for a hint, but it’s not always a useful one.

Graphically, The Origami King simply blows the previous games out of the water. There are things - such as a tower of dirt at one point - that look photo-realistic, and I was surprised that they weren’t.

The soundtrack is really good. It’s not just the overscore of walking around, and fighting in battles. There are several points where one character or another sing! Sure, it’s a nonsense language so they didn’t have to get a ton of voice actors, but it’s subtitled so you can follow along.

On the whole, Paper Mario: The Origami King is a fun, but flawed entry for the series. It retains all of the requisite charm, but since the fights feel like more than half of the game, it’s a huge letdown. The whole battle circle thing is annoying to use, and the boss fights can be incredibly frustrating. On a less charming, beautiful game this would be a deal breaker. This is one for fans more than newbies. 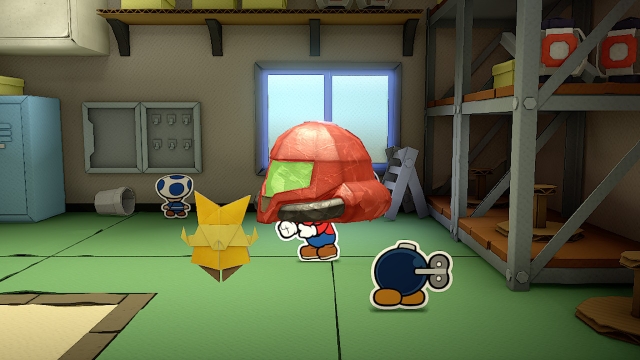 If you’re a fan of the series then you can’t go wrong, but it’s not the strongest game in the franchise with its plain bad battle system, regardless of how charming and beautiful it is.