Planet of the Eyes Review

It’s sci-fi LIMBO in color and with a robot instead of a young boy as the main character. That’s it. Everyone go home, the review’s over. 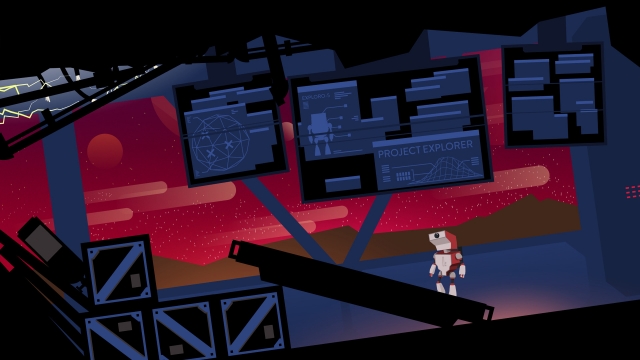 Still here? Alright, I suppose there’s more I could talk about. Like I said, Planet of the Eyes feels nearly identical to LIMBO when it comes to gameplay. To be clear, I mean that the player can only walk, jump, climb ladders, move objects, and swing from certain things. Although, these simplistic controls are arguably enough to carry interest through the rather short experience. When I say short, I mean short. I got the code for this game at 9 a.m. and had beat the game with all the achievements by noon. Honestly though, I didn’t mind the game being short since by the end, I was actually getting fairly burnt out. I feel as if a two or three hour playthrough is very fitting for this title and others like it.

A large part of what made me start resenting Planet of the Eyes was simply how much time I spent walking left or climbing up tiny ledges that serve no challenge or other purpose besides being the transitional area between the actual challenges. If I’m being entirely honest though, the largest difficulty I found in the game was trying to negotiate with the obnoxious end game puzzles that require the player to jump across and around a bunch of slowly twisting and turning platforms. To top this all off, there are large areas of effect that will instantly kill the player if they touch them at all. Nearly every other challenge was rather simple or just so quick to retry that trial-and-error took over when there was a troublesome jump. 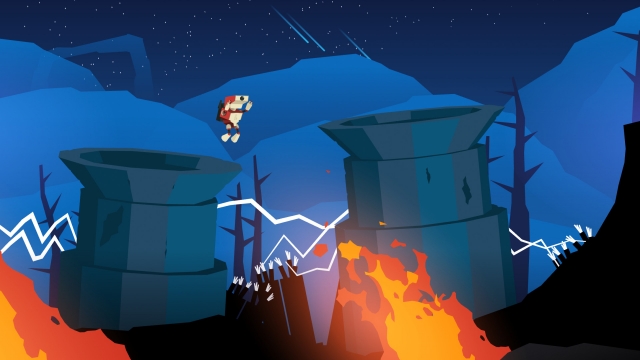 For transparency’s sake, I will admit that most of the platforming was fairly solid and made me feel like I was in control. This is awesome since so much of the game is just timed jumps and precise landings. The rest of the gameplay is sort of inconsequential as all the other mechanics are used so little. Beyond the gameplay, there is a narrative told through audio logs every so often. These logs are really easy to find since most will be on your path as you progress from area to area. As you delve deeper into the alien planet, these logs will slowly expose why our protagonist is the way he is and what kind of man helped bring life to him.

Without ruining any major plot points, I can say that the game takes place on an alien planet and our robot character does not consciously know why he is there. This lack of understanding is quickly compounded by the scenery all around our little hero. Between the crazy contraptions, awkward architecture, and the wicked wildlife, it’s clear that this place is not the most hospitable vacation spot out there. With so many dangers around every corner, I feel like the comparison to LIMBO is more than justified. In fact, the main differences between Planet of the Eyes and LIMBO is the addition of color and a spoken narrative, even if it is nearly as unclear as LIMBO’s mute story. Honestly, I’m at a loss for what to talk about. With the game only being a few hours long at best, it’s difficult to talk about any one thing much since I don’t want to give anything away and there aren’t that many things to talk about. Sure, I could talk about how the protagonist offers no interesting characteristics since he’s just a robot that seems to be driven by a compulsive need to collect the aforementioned audio logs. Maybe I could mention that the world flows well enough from area to area, or that the puzzles become boring since they are usually easy to figure out but frustrating to complete.

If I had to pick one last thing to tell anyone that reads this, I’d say that this game is good for a single playthrough and makes for an easy completion if that’s your thing. Besides all that, if you enjoy games like LIMBO and don’t mind a quick one-off, this game may scratch your itch. Despite what others may say, I don’t agree that the ‘atmosphere’ is anything spectacular. While this is a very pretty title, the world and story didn’t pull me in all that much.

Planet of the Eyes (Reviewed on Xbox One)

This title is pretty and has decent platforming despite not pulling the player in or offering challenging puzzles. Simply put, it does as much right as it does wrong. It’s short, but it doesn’t overstay its welcome due to that. It’s too easy, but it makes for a nice quick completion when you’ve got some extra time. Might not be a bad idea to wait for a sale and complete it in only a little bit more time than it takes to download.

Planet of the Eyes