Post Void from YCJY Games is yet another game to put their unique spin on the roguelite genre by mixing the gameplay/visuals of the classic DOOM and Hotline Miami, which mesh together wonderfully. Although, if you have epilepsy, you might want to stay far away from this one.

As soon as you open the game, you get immediately dropped into a tutorial where you learn the very basic mechanics of this first-person shooter: WASD to move, left-click to shoot, shift/ctrl to slide and spacebar to jump. In your right hand, you have your gun and in your left, you have an idol (which looks like a head) with some sort of liquid seeping out which acts as your health. Because of the leakage, your health is constantly draining and the only way to keep the idol full is to kill enemies at a rapid rate. There is no narrative to Post Void, you essentially get dropped into this apartment complex-looking building with tight corridors and numerous enemies as the game just begins. 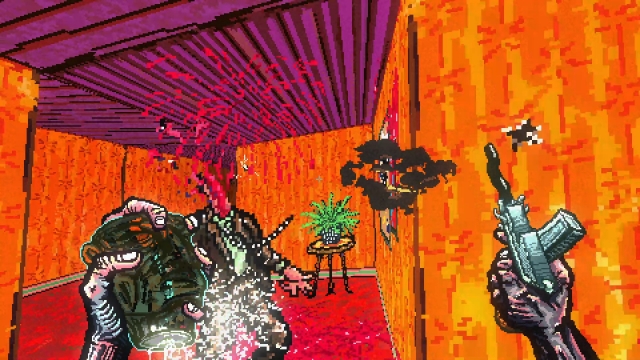 There are 11 procedurally-generated levels you have to go through that are separated by three acts which seems like a weird choice considering the lack of story and it’s a roguelite, so when you die, you start back from level one. The goal is to get to the end of each level and jump through the glowing puddle in the ground to get to the next level. Each level will introduce a new enemy type to shake up the gameplay, but also to keep you on your toes as it can get frustrating when you die. You receive a score after every death as well and receive multipliers for accuracy, headshots and damage taken, but the score only matters for leaderboard purposes.

Getting to a new level also grants abilities that you can choose. Three options appear as you finish each level which can either give you a new weapon such as a knife, SMG or shotgun or a passive upgrade such as fast reloading, more liquid in your idol or enemies exploding on death. It’s really up to you and your playstyle for which upgrades you want to choose, but I found that the first pistol you get was the best out of the weapons because of the instant, satisfying headshot. 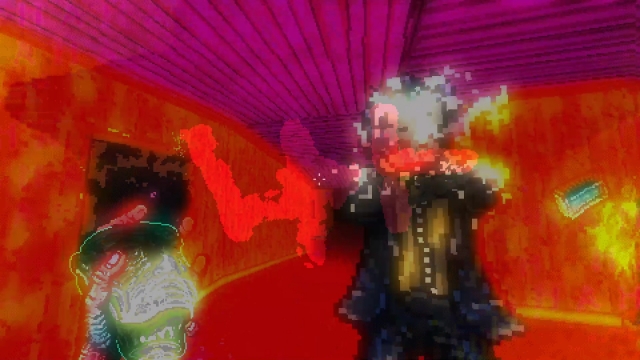 With all those elements combined, it makes Post Void an absolute blast to play, especially once you get into the flow of the gameplay. It genuinely feels like a combination of DOOM and Hotline Miami in every sense. Sliding, jumping and headshotting enemies at rapid speeds feels chaotic, fun and badass when you’re in the zone, but dying as you get to a new area is always a bummer. The enemy types have some really cool designs as well, but the graphics – as great as they are – can get in the way of some of them.

Post Void keeps at its theme to be a perfect blend of DOOM and Hotline Miami with its awesome visuals. Since it takes the first-person perspective, it gives off a DOOM vibe immediately, but when you go through the levels with all the insanely vibrant, neon colours you just feel as though you’re playing an FPS Hotline Miami. The issue with some of the enemies is that the smaller ones such as the drones can become nearly impossible to see when moving around so quickly that you end up walking right into them taking unnecessary damage. Despite that, the visuals are amazing and accomplish what their intention was, but beware epilepsy gamers, Post Void contains flashing screens each time you die, which will be a lot. They warn the player with a very quick message in the beginning, but the flashing images begin as soon as you hit a button.

Post Void is an excellent mashup between classic DOOM and Hotline Miami that can take minutes to beat, but hours to master.