I like many others have enjoyed seeing the track that Project CARS had been taking, with the upgrades from their first iteration to the second really adding another dimension to the driving aspects, and the overall quality of the game. Better graphically, audibly - and in handling. So when Project CARS 3 was initially announced, and then subsequently in updates from Slightly Mad Studios the layers of polish were eroded - gone were things sim racers look for in a game; tyre wear, pitstops and fuel usage. The plan was to bring the racing closer together and into a more meaningful career mode, but even that has some problems in execution.

The biggest problem is that the AI drivers skill level fluctuates between “Sunday Race League Amateur” to “Lewis Hamilton’s Lost Twin”, and that can happen between two laps of the same race, especially when the rain starts and it seems like the AI don’t have to contend with the same level of loss of grip as you. Additionally, with there being no qualification races, you’re generally stuck in the middle of the pack somewhere at the start of each race, meaning that you have to pull something out of the bag to get by, which is then further compounded by the relatively short race lengths of a couple of laps to get it done by. This mostly leads to having to revisit the same technique in each race; make a dive in the first corner and hope you come out of it unscathed enough that you can pip the front of the pack in the remaining lap or two. Ultimately though, the rest of the package in Project CARS 3 can actually be quite enjoyable. The career mode follows a more structured approach, with each event having per-race challenges to take care of; by drafting cars for five seconds or mastering a certain number of corners for example, it injects some much needed replayability to the races outside of just bashing your way to first place. With the more long term background goals as well, such as completely mastering a track or completing events in certain cars, there’s plenty of things to be working toward - however menial some of them may be. You get to stick with a single car for a lot longer in your career mode (if you want to), meaning you get some time to really learn the nuances of that car and upgrade it for each series you’re in. It’s nice not to be hopping from supercar to supercar for a change, and brings with it a more grounded feeling that you and the car is what’s important to the racing, rather than just the power under the hood.

Graphics didn’t seem to be anything special to write home about, with visible jaggies appearing around the cars in the middle of races, even on the One X. There’s also some quite bad pop-in with certain track elements, which can be really jarring as they appear in a place that looks like it just might be a straight continuation of the track. However, it does deliver a 60fps silky smooth experience. The same can be said about the audio - it largely gets the job done, but cars don’t sound quite as raw or throaty as they do in other racing games. There’s a couple of lines of audio from your race engineer suggesting that you make changes to your car in relation to the changing weather conditions, which is odd considering pit stops were removed. 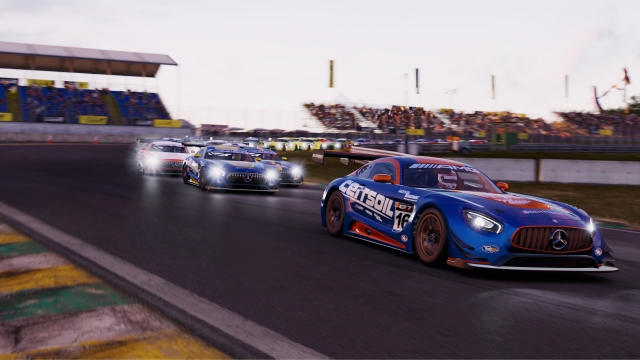 Overall, casual racers will likely have a great time with Project CARS 3, however, sim racing aficionados will likely want to steer well clear. The real point of contention is that this shouldn’t have been called Project CARS 3 and instead, taking a leaf from Turn 10’s playbook, renamed to something that didn’t place it in the main series of games. Project CARS: Shift maybe...

A fun, casual arcade racer that has a decent chunk of a career mode to keep you busy with some fun aspects, let down by wonky AI and being placed into the wrong series of games making it really hard to recommend to either demographic of casual race fans or sim racers.