Some of my favourite games are shoot-em-ups. I've played more hours of titles like Tyrian, Xenon 2: Megablast and Raptor: Call of the Shadows than I can care to remember, but I've loved every minute. There hasn't been a shoot-em-up recently that I've enjoyed as much as the older titles mentioned - mostly because the answer to making a modern shoot-em-up seems to descend straight into a bullet-hell style game. Flashy visuals bleach the screen out making them nigh-on impossible for me to enjoy, without having to spend countless hours learning exact bullet patterns and precise inputs.

So Project Root piqued my interest by being a shoot-em-up not of the bullet-hell variety and bringing something new to the mix - the ability to fly around freely rather than following an automated scroll. This brings additional technicalities to the mix which might be a little too ambitious for the game.

It’s easy enough for anyone to pick up and play. If you've played a shoot-em-up before you will know how this is going to go; you point your ship at the bad things and shoot them before they have a chance to shoot you. There’s two primary firing options, one for enemies in the air and another for ground targets which are mapped to the right and left triggers accordingly. No limitations on these weapons means you can fly around with the triggers held down constantly unleashing a never ending stream of death and destruction.

There’s some pick-ups dropped by the enemies which either give you a limited special weapon that can be used for devastating effect (though you can only have one of these at a time), to repair your ship in times of need or to award you with an additional life with which to continue the mission.

Upgrading your craft is key to dealing with the harder enemies the game throws at you, but achieving the XP you’ll need to get them is a very slow process. Your upgrades don’t cross over on difficulties either, so you can’t get all of the upgrades on easy, then blast your way through harder difficulties like a hot knife through butter.

However, there are a couple of issues that hinder the game and what it’s trying to achieve. Whilst playing through one of the missions, I noticed that there were some enemies in front of me. I went in pursuit of the evil-doers, only to find that they’d managed to skittle off behind an invisible wall - that I couldn't shoot through, but they could which was a little infuriating. 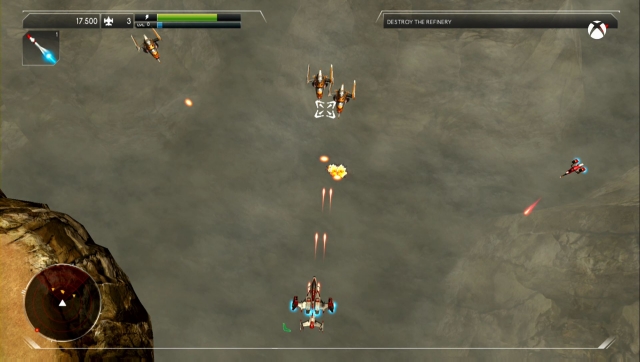 Damn 'noclippers' all up in my business

This happened at another point in the same mission, though this time, the wall wasn't invisible. I was being shot at from behind a large rock formation. Again, infuriating, but in both situations, flying away forced them into either chasing me down and leaving their security barriers or flat out ignoring me.

It’s also very difficult to keep up with the story as the mid-mission messages that appear in the bottom right have very small text, but also appear during the action. As it moves through the dialogue automatically, this is very easy to miss if you’re mid-combat with a whole load of enemies. Maybe some strategically placed “down-time” in the action would have been a huge benefit to the story development. There’s also some grammatical errors within the mission text - but I couldn't help wonder if some are at least genuinely based on the fact that the development studio are Argentinian. 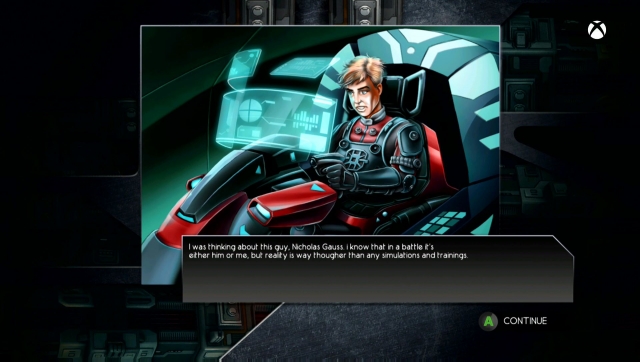 Personally, I’d have liked the camera to be further ‘down’ from the ship - and zoomed out a little bit more too, so I could have a better visual of when I'm being fired at from behind. I can’t help but wonder whether the game would have benefited from a more standard twin-stick shooter style set-up though, your ship in the centre and the camera at a fixed angle with the ability to flick round to point in any direction quickly. It would certainly open up the techniques you can use to dispatch enemies.

Overall though, you've got a competent little shoot-em-up in Project Root that offers bite-sized chunks of explosive enjoyment, though it can become repetitive quite quickly. That said - it’s a base for OPQAM’s future developments and interesting to see how they improve with Dogos.

Project Root (Reviewed on Xbox One)

A fun little shoot-em-up with an interesting twist, but only if you’re not really interested in a story line and just want to pop some bad guys when you have a bit of down-time.

Thanx for the review. It helps us improve as a studio. We are already working on a new shoot-em-up that will rock. Thanx again. Best, Pablo.

You're welcome, I'm glad that it will help you improve. I look forward to seeing what you bring to the table with your next title!