WARNING:
This game contains flashing graphics that could potentially trigger seizures in people with photosensitive epilepsy

Those who grew up with free flash browser games during the early 2000s are, unsurprisingly, making videogames inspired by their own gaming experiences… though having nostalgia for soul-crushingly difficult “impossible” maze games may just be an indication of childhood trauma instead.

PUSS!’s soft vaporwave aesthetics is but a thinly coated facade that harbours a kitty occult, a devilishly vicious series of trial and error courses, and a control scheme that actively works against the player.

Every game starts you off with nine lives, just enough to traverse through the nine stages and defeat the boss of each world - there being six worlds in total and a final boss to complete the game. Though the stages act more like a shuffled playlist of levels, never knowing what fresh hell you are going to encounter next.

PUSS! was born and bred to be punishingly difficult by design, and with the extra constraint of translating PC precision for console controls (specifically, the joysticks). The core experience is similar to one of those steady-hand games, eeking your way across a maze without touching the sides… though if on top of that, you had people pelting pebbles at you, and you’re trapped in a vaporwave nightmare.

It’s how I imagine a haunted copy of Microsoft’s Encarta would look, had it trapped the soul of an early 2010s exhibit curator come moonlight memer. Something that wouldn’t be out of place as an Adult Swim produced title circa the early 2010s. 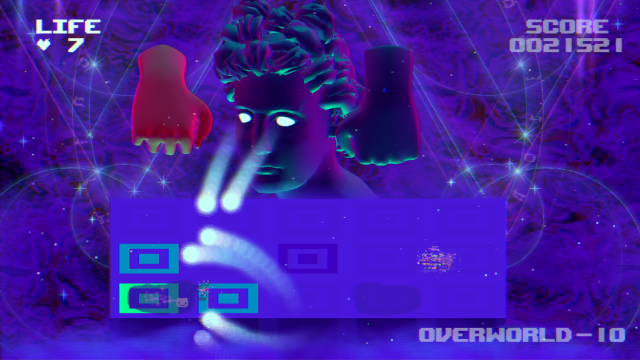 A warning to those photosensitive to any degree, or whoever is susceptible to motion sickness - I would strongly recommend not playing this title for longer than 30 minutes or so (if at all) for health concerns. As someone who has only exhibited light symptoms from motion sickness via VR, I couldn’t play PUSS! for longer than an hour without a break.

At first glance, PUSS! seems to emulate the “kitteh + pizza x drugs = RANDOM” style of humour, but I found it wasn’t as in-your-face as I expected; the best comedic displays that worked the best came from within the level’s themselves rather than the visual design (be it an obstructive foreground dolphin, or sommin else)

Though the cat definitely has a set of claws, PUSS! doesn’t always act like the feral beast it prides itself to be. At times, the game will take pity and offer checkpoints, extra lives, or time-slowing buffs to encourage you to keep playing. Even touching the walls isn’t a death sentence, as it triggers a static effect to alert you to readjust; which considering games of its ilk - it’s fairly forgiving.

This doesn’t detract from how cheap a lot of the deaths can be, especially with the cruel bouts of corrupted hard modes that’ll invade your current level, and specifically within the boss battles; of which feel as though they were made to deplete as many lives as possible for the sake of feeling difficult - rather than say, testing the player’s skill.

At least you are rewarded with allied support from those you rescue after each world, some of which assist you during the game; making every step closer to the finishing line a little easier.

Where the visual cacophony of psychedelic glitchy web art is purposefully overwhelming (sometimes to a fault), the soundtrack not only complements but finds a pleasant restraint in developing an atmosphere. It turns an overplayed culture in meme-dom into a palatable experience for the player and spectators. I wasn’t expecting ASMR from a softly spoken European man, nor synth pulsing under archived audio logs of war chanting, or an eternal loop of lavish orchestral swells either! The music enhances the environment without smothering the game in unnecessary noise.

PUSS! Is a product of post-internet nostalgia birthed from meme culture of yore. best enjoyed in micro-doses, purrfurably with friends, and like any feline; it’s a gorgeously painful experience in and of itself that at times can be cruel and unfair, but rewarding in its own way.

If a mini meander of mind-bending meow-sochistic mouse mazes sounds like a good trip to you, then PUSS! Is undoubtedly a great recommendation. Otherwise, the purposefully stringent controls, disorienting gameplay, and rage-inducing cheap-shots might rub folks the wrong way.