There are plenty of things out there that are decent enough, but aren’t exceptional. Digestives without chocolate on, Wednesday afternoons, frozen yoghurt, and oatmeal raisin cookies. You wouldn’t turn your nose up, but they’re nobody's first choice. That’s pretty much where RAGE 2 sits for me. It’s neither a Tommy Wiseau movie or a Tom Hanks one; it’s Jude Law and Katherine Heigl in a romantic drama. There’s plenty to like, but nobody is going to be singing its praises in a few years’ time.

The problem that I have with RAGE 2 is that the pacing is all over the place. There are set pieces with frantic and tight combat that finish with you hunting around for hidden objects in near-silence. You’ll find yourself entering mutant nests and running around like a blue-arsed fly shooting everything in sight, then when they are clear you just pootle off to another town to turn in the quest in like you’ve got all the time in the world and you’re not trying to avenge the gruesome death of your entire family and friends.

The handling of upgrades is also daft and clunky. You get given weapons and skill upgrades by finding the locations of Arks and poking your hand into them. You’re then treated to what is essentially a five minute holodeck tutorial about how to point a weapon at something and press fire. It’s a far cry from the DOOM reboot where you’re given great big guns and sent out to find out how they work by playing with them. I do appreciate that humans are pretty stupid, as evidenced by the popularity of Love Island, but this game takes patronisation to another level. I’ve played games aimed at young children with less time spent in tutorials. It’s a shame that the pacing issues are so omnipresent, because when it gets good, RAGE 2 gets really good. Combat feels unencumbered and exciting, with plenty of approaches to every problem, and most of them culminating in a vast amount of fire and screaming. There are some genuinely challenging moments but it never feels like the game is just setting you up to fail. Some of the trickier scenarios require a good deal of forethought before running in all guns blazing. That said, doing just that is always fun.

The game world is lovely and really well created. Freedom of movement really does mean that here as well: I never found myself up against invisible walls or locked out areas. If you fancy skipping the normal roads and just scrambling up the side of a mountain clumsily, RAGE 2 doesn’t feel the need to stop you, no matter how inelegant and inefficient it might be. The downside to this is that it’s easy to get yourself mixed up in something that’s a bit too high level for you, but the game helpfully lets you know the approximate difficulty of the area that you’ve wandered into, giving you ample opportunity to turn tail. Of course, if you create a giant open world, then you need to actually fill it with something to do. Sadly, Avalanche didn’t get the memo here and the world of RAGE 2 feels empty. I get that it’s a post apocalyptic landscape where most people are dead and road maintenance has gone out of the window, but we’re bordering on a game of Desert Bus here quite frankly. There’s just wasted space everywhere and stupidly long driving sections to get from one objective to another where the most exciting thing that happens along the way is you drive over a cactus and it makes a satisfying squish sound.

The voice cast did an excellent job here, with just the right mix of drama and over the top ludicrousness for a game like this. It’s got a real old-school Steelpunk feel to it and I genuinely found myself rooting for certain characters throughout the game. The addition of unlockable voiceovers from Danny Dyer and Ozzy Man were great touches. Although they get repetitive after a while, they’re indicative of the attention to detail that has gone into the game. It’s been designed to be over the top, raucous, and just fun to play. Honestly, if you took away the open world aspect and made it a linear mission-based game instead I would probably have nothing to complain about, and this would be a glowing review.

In the end, RAGE 2’s downfall is largely the same as the original’s, and that is that there just isn’t enough to do to justify the size of the world. It’s a little fish in a big tank and that’s a shame. There’s a huge amount of fun to be had here, but the bits in between might as well be a loading screen. I wouldn’t hesitate to recommend it, but don’t expect it to be a vibrant world full of life. It's a game that's definitely worth playing, but it could have been so much better than it is. For all the vibrant pink and yellow, it's the game equivalent of beige. 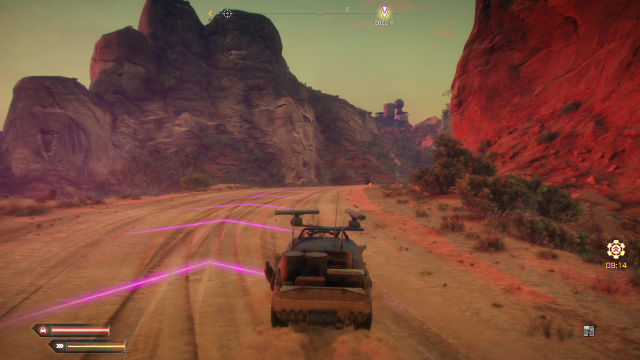 It's a game that's definitely worth playing, but it could have been so much better than it really is. For all the vibrant pink and yellow, it's the game equivalent of beige.