The latest release of the hit vertically scrolling shoot ’em up, Raiden, is now on PlayStation 4 and it has a reputation to live up to in its fifth mainline entry. Coming in the form of a director’s cut, the game has the standard gameplay mechanics you expect along with some nice new features included. Do these help to make Raiden V: Director's Cut live up to its name and reputation? The short answer: you bet.

Now, players will be happy to know that like most bullet hell games Raiden V: Director's Cut makes sure your screen is continuously full of bullets. In fact, the game is a visual spectacle of bright colours and explosions as you battle your way through countless enemy ships. To aid in this on-going destruction you are able to change your weapon periodically through a level by picking up a token. This token will change colour with the colours matching one of the three weapons you picked at the start of your run. Once you find your preferred weapon though you might feel no need to change and honestly, that is fine. Thankfully, the smart bombs that wipe the screen of bullets and enemies are here as well, though only expect to have a few at a time. As mentioned you pick one of three weapons at the start of the game. In fact, you get to pick from nine different weapons, three for each of colour, and then take those three into battle. Likewise you can control one of three ships each with their own distinct benefits. Want to have more speed at the cost of your defence? You can have that. More health but less speed? Sure. These options mean that before you even fire your first shot you are able to set up a playstyle that works for you. Now take note of the use of health here rather than lives. In this title gone are the lives of past games now replaced with a health bar. This means you have a few more chances to complete a level and works surprisingly well. You will also find pickups now and again that will give you a small amount of health back.

One feature of the game that is an interesting addition is the ‘cheer’ function. At the top left of the screen small in-game achievements will pop up now and again and by pressing a button you can cheer it. If a player cheers you, you are able to save it up and use it to activate a cheer attack. This attack brings another ship on screen for a short amount of time and increases the output of your weapons by a large amount. Using this at the right moment can really make the difference when in a tight spot or when dealing with a boss. There is no real depth to the cheer function other than hitting a button and hoping you get plenty yourself but it is a nice way to get extra firepower. Raiden V: Director's Cut is a visually impressive game that makes use of its bullet hell gameplay to keep your attention. Though the 3D backgrounds can sometimes mean enemies blend in a bit too much and you might suffer the odd cheap defeat, it shouldn’t stop you playing. At the same time the soundtrack is on point and delivers some superb tracks throughout to make your combat all the more awesome. Even in two player mode, which is offline only, the game is a treat to look at and listen to. Presentation throughout the whole title is clean and refined and is matched by solid performance as well. My only complaint with the presentation for the title comes in the form of the voice acting.

Unlike other games in the series, Raiden V: Director's Cut is fully voiced. This means that as you play through levels a number of characters will blabber on about plot devices, random facts and even their love of coffee. All while you are busy trying to survive whatever is being thrown at you. This would be a nice addition to the game if it was executed flawlessly. The performance of characters is off with no real consistent standard to be found and the volumes are all over the place. Plus, the need for one character to mention coffee in almost every stage just gets old really quickly. Of course, a solid narrative within a bullet hell game is not really a needed feature but in the case of this title none at all would of been better. 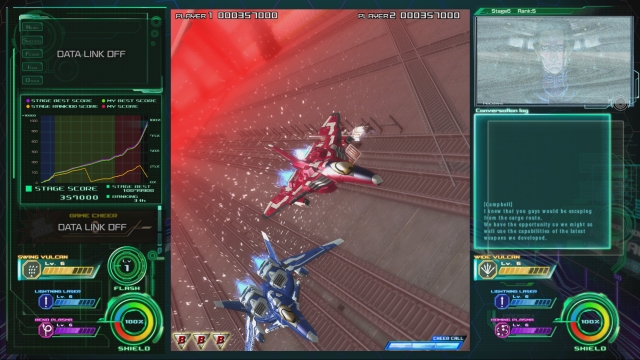 So where does this leave Raiden V: Director’s Cut. As far as bullet hell games though this one is a stand out title with plenty to offer. There are a number of stages and endings to be found in story mode with extra modes available as well. One run might last just over an hour but it feels right for a game like this. Sure, there is the odd cheap death due to enemies blending in but this is made up for by fantastic moment-to-moment gameplay. With plenty of fun moments, awesome bosses and great weapons players will be spoiled for choice. My only suggestion would be to pay the story no attention and to turn the voice acting volume right down.

Whether you are a serious fan of bullet hell games or new to the genre, Raiden V: Director’s Cut is a great place to start. It offers easy to play, but hard to master gameplay and some great moments throughout. The price point might seem a bit high for some but if you do pick up the title, you won’t be disappointed. Now if you don’t mind, I have a high score to beat.

Whether you are a serious fan of bullet hell games or new to the genre, Raiden V: Director’s Cut is a great place to start. It offers easy to play, but hard to master gameplay and some great moments throughout and lives up to the series name!