Normally, a mixture of genres in a game isn’t a bad thing. More often than not, it gives players a chance to experience multiple mechanics, so that the title in question doesn’t become too dull or one-dimensional. In regard to Rainbow Skies, however, this is one title that’s trying to fit too many eggs into one basket. Unfortunately, it’s a game that tried to go all in, but ended up coming out flat broke.

Well, okay, I say flat broke, but what I really mean is that it just doesn’t jump out. It doesn’t feel unique, it doesn’t feel like it has an identity of its own. Even the title, Rainbow Skies, reads like it belongs to a Final Fantasy DLC package, or something along those lines. All in all, I just wasn’t interested. I was bored when I started with it, and bored when I continued with it which, for a videogame, doesn’t really inspire a lot of confidence in it’s lastability as a product. 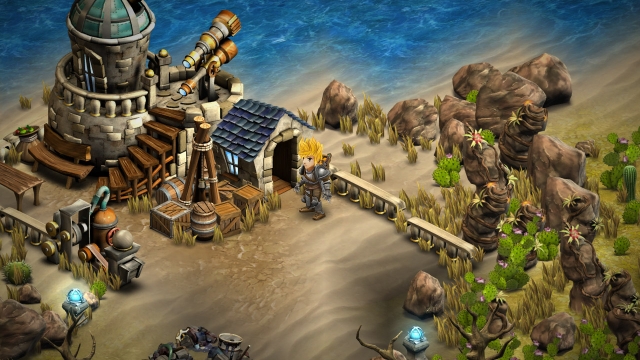 The gameplay is also pretty basic when all is said and done. An isometric arena fighter with an emphasis on strategy? A fairly interesting concept indeed, if not for every indie game ever. Obviously I don’t speak literally, not every indie developer makes isometric arena fighters, some of them make good games as well. Of course, now I’m just being cheeky. Jokes and jabs out of the way, Rainbow Skies just doesn’t have enough punch to keep up with other games of the same style. It tries to do too many things at once, by having puzzles, trying to be strategic, and wanting to be a JRPG. It’s all spread too thin and there’s no real focus on anything. Sure, it plays fine but when you’re going into a game saying “Yep, that sure is a videogame”, maybe it’s time to explore better options.

That being said, one of the few features that did actually stick out to me was the naming system. It does my favourite thing where you can put in any name you want for your character, and that name will appear in the text boxes when playing. Now, being the mature adult that I am, I decided to call the protagonist something that would surely spice up the dialogues and add a little flare to the game. That flare being, Shithead! The legendary hero of the land! I must say, when playing through the game’s entirety, there were a couple of really great moments when Shithead’s name came into effect rather nicely. Good times, good times. 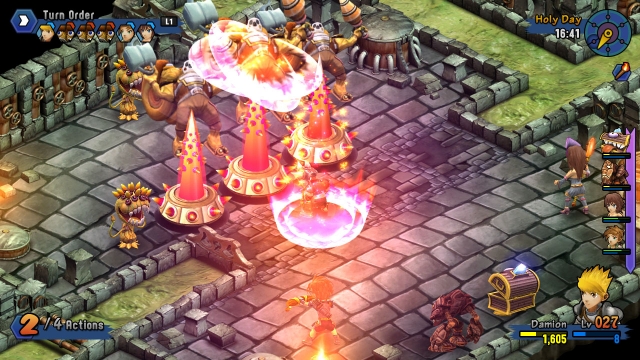 Juvenile naming aside, there isn’t a lot else to really mention when it comes to positives. Everything was just so average and uninspiring; the story is your classic coming of age hero tale, the visuals were fairly standard, and the character designs look like they were unused sprites from other games. It’s as if the developers working on this huge isometric epic had the mindset of “if it ain’t broke, don’t fix it.”

So, with all that taken into account, is Rainbow Skies worth it? No, I honestly have to say no. This title just lacks heart and doesn’t seem to strive for anything past mediocre. I had high hopes that this title was going to exceed my expectations, but I was let down by an overall bland and uninteresting attempt at a game.

Done before and done better, Rainbow Skies is a game that has taken a fairly bland concept to begin with and proceeded to not change a thing about it. If you're looking for an epic tale of heroes and rogues, you'd be better off looking elsewhere.