Ratropolis was once a prosperous and bustling city and home to many rats. As time went on, they became greedy and started conducting genetic experiments. Things went horribly wrong and it caused the rat apocalypse. The surviving rats had to escape their homes and flee to the surrounding forest, desert and coast. So it is up to you, the leader of the rat-pack, to start a settlement and protect the remaining rats from the waves of enemies trying to eradicate them. 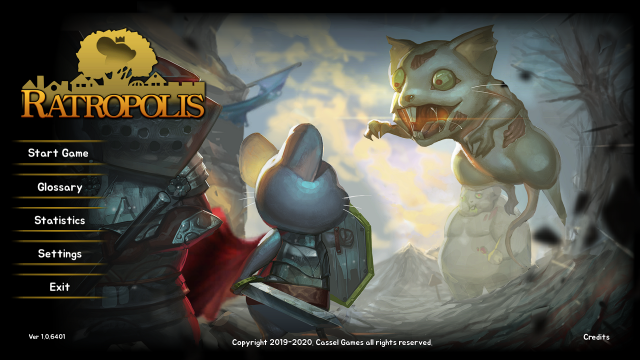 Ratropolis is a beautiful real-time tower defense, city builder, with deck building mechanics developed by Cassel Games. In the past, I have only played a few tower defense games like Battle Cats and Ninja Town; they definitely weren’t like this one. At the beginning, you choose your difficulty and which area you want to build your settlement in; the forest, coast or desert and choose your rat leader type. You can choose if you want the tutorial mode on or not, since it’s not really needed after you have played multiple times. There is even a nightmare mode available if you need more of a challenge. According to the game, if you survive past wave level thirty, super strong monsters and dreadful events start happening. 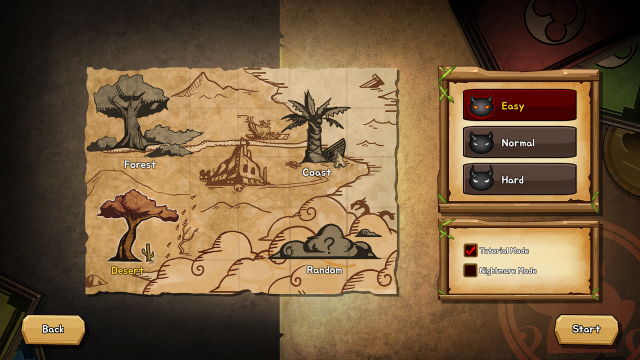 When you begin the game, only the merchant leader class is available to start, but as you progress in the game, you can unlock the six different types; merchant, builder, general, navigator, scientist and shaman. Each of these leaders has different attributes that help you defend your settlement and it will be worth experimenting to see which of these leaders works better for your playstyle. In my play-through, I found that I was running out of gold really fast so I like choosing the merchant, you get a 25% discount when you buy cards and you get 10% of your gold when you discard a card. The eight cards you start with in your hand will depend on your choice of leader and will be a mix of green economy cards, red military cards and brown building cards. Taxes are collected every five seconds and are added to your wallet to help pay for new cards and to use the ones you have. As you defeat the waves of enemies they will leave behind a treasure chest with your choice of three items. Most times, they will include a new card, money, the option to discard one of your cards or an upgrade to a building. There are 200 different cards you can collect so it is exciting to see which random ones you get to choose from. My personal favourite so far is the Hog Thrower, allowing you to throw hedgehogs at your enemies. 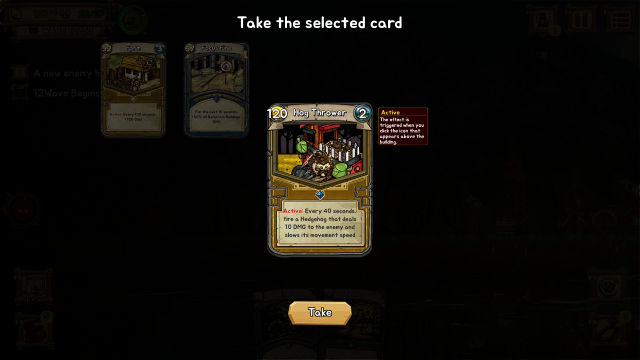 This game is real-time, not turn-based, so even if it seems like the waves of enemies are coming in slow, that will not last for long. The timer does not stop when you are visiting the merchant or looking at your cards, so keep that in mind. The enemies that attack include animals like cats and weasels so you have to build walls, towers and posts to defend your base. The ratizens (the rat citizens) that live at the settlement are recruited to become soldiers and defend the city. And in order to procure more troops, you need to build more houses for rats to live in; but to get houses you have to get the cards and use money and this is where the strategy comes in. You have to figure out what you want to focus on the most. The first time I played, since I didn’t really know what I wanted to focus on, I only lasted for seven minutes. The waves come from both the left and right of the screen so you have to make sure you are set to defend from either side. You will also have to be sure to fix up your buildings that were attacked so they are ready for the next wave coming in. If you don’t, there is nothing to stop the enemy from just storming in. Later on, they will flank you from both sides, so you have to be ready. Personally, I have only made it up to wave thirteen, so I can’t even imagine how hectic it will get as you get closer to the last wave at thirty.

Even though I don’t play many tower defense games like Ratropolis, I find it incredibly addictive and fun to play. Cassel Games did a great job with Ratropolis and made it accessible to everyone, even if this genre is new to you.

A super fun and addictive game, even for those who don't usually play real time tower defense games.