Rockstar Games is undoubtedly one of the most widely recognisable developers with a reputation for controversial sandbox titles. Despite the media storm that usually follows every release, their games never fail to perform incredibly well, both critically and commercially. Their latest release, Red Dead Redemption has been described as "Grand Theft Western", but is this necessarily true? 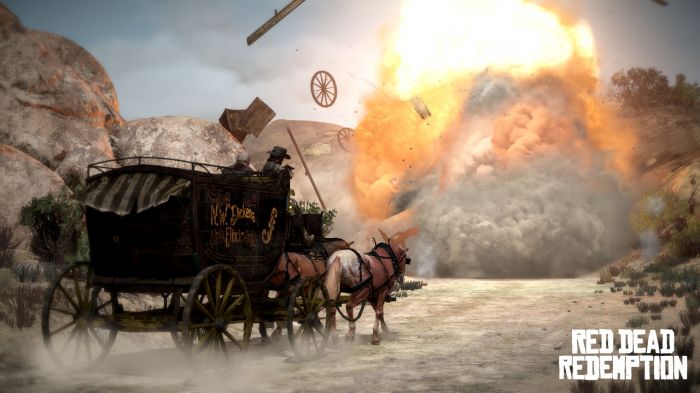 Inevitable comparisons will be drawn between Rockstar's hugely commercial franchise and it is easy to see why. Both games are sandboxes, have a wealth of side missions and feature similar protagonists who are forced into a life of crime. However, Red Dead Redemption somehow manages to be more engaging, compelling and fun than Grand Theft Auto IV and any of its expansions. The radically different setting and time period manage to shake off any feelings of déjà vu and as the game begins it feels like you are playing an open-world sandbox for the very first time. 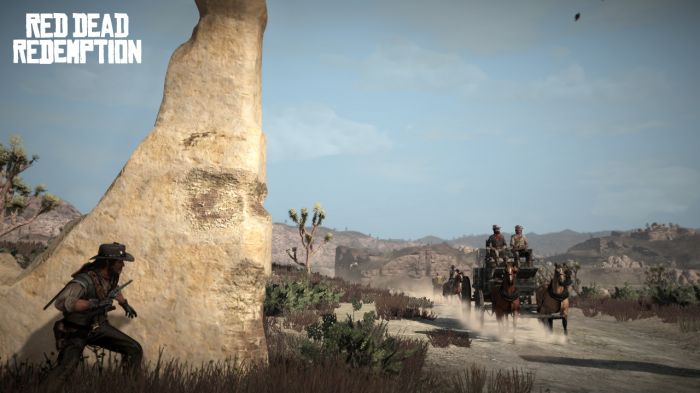 Acting as a successor to the largely forgotten 2004 Red Read Revolver, instead of a direct sequel, the main story follows John Marston and his quest for a simple life. An ex-gang member, Marston is drawn back into the life he tried to leave behind by a pair of federal agents who use his kidnapped family as leverage. The story is surprisingly deep, featuring some excellent and well-drawn characters that you become attached to. The sheer range of odd-balls, psychopaths and heroes that you meet is enough to keep you playing and the quality of the script is never less than impressive. The outstanding production values are reflected everywhere, most obviously in the visuals which are jaw-dropping. Whether you're riding across the desert landscapes of Mexico in the baking heat, hiking up a snowy mountain or getting caught in an enormous storm it is always astonishing. Similarly the sound effects here are just brilliant, and often terrifying, never more so than when you find yourself being savaged by a rampaging grizzly bear. With a soundtrack that brings to mind classic westerns and some fitting songs at key moments in the game, the music always adds to the experience. Technically, the game creates an unprecedented level of immersion and it is very easy to find yourself losing hours simply exploring, gunning down bandits or even collecting plants in the wilderness. Following the main story is likely to be your main concern and each mission carefully introduces new gameplay elements, without feeling patronising. The core mechanics of the game revolve around gunfights, as this is the American West. The targeting system is simple, third-person aiming with a handy reticule which has an optional aim assist should you require it. To sit alongside this is your Dead-Eye meter which transforms you from a wannabe cowboy to a truly badass gunslinger. At the press of a button time slows down allowing you to place your shots more accurately. As the game progresses you unlock upgrades and once you reach the second act of the game, you'll be able to paint multiple targets, allowing you to wipe out entire rooms of enemies in one quick motion. It's an incredibly innovative and easy-to-use system which never gets old and is always useful. 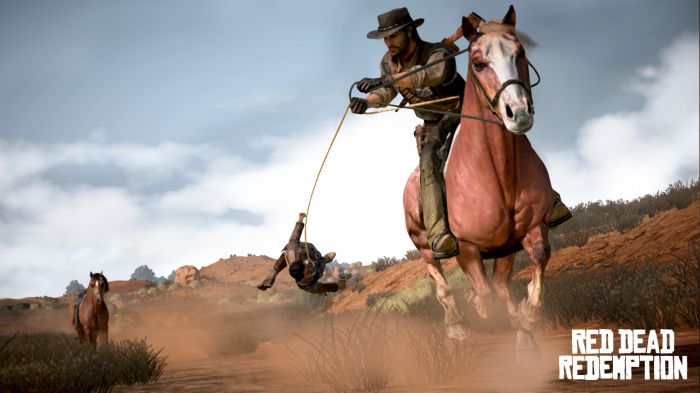 So, while many of the missions revolve around shooting up a host of Old West baddies there's a lot of variation in how this happens. One minute you can find yourself in the midst of a bloody street fight in a ghost town, the next you'll be facing-off in a tense mini-game duel against someone who has bad-mouthed your reputation. The level design is always fantastic, exploiting the entire landscape over the course of the story, taking you from one memorable encounter to the next. There are plenty of other things to do as part of the missions, including horse taming, cattle herding and even playing political factions off against each other. Rockstar has definitely perfected the art of keeping you playing and avoiding repetition as much as possible. 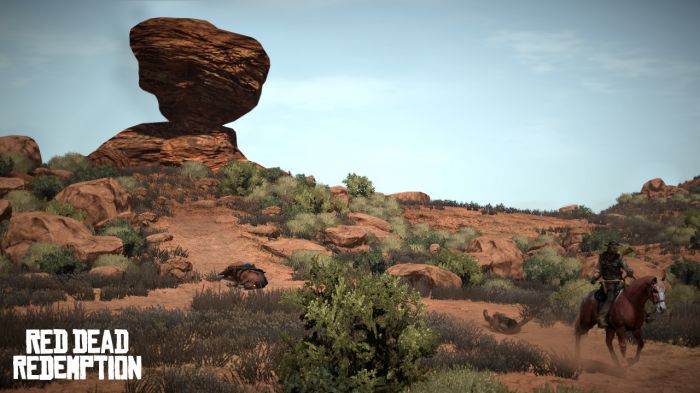 Outside of the missions, of which there are around 60, Rockstar has included a wealth of extra pursuits to keep you occupied. Scattered around the enormous game world are "Strangers", who have a series of tasks for you to accomplish. These unusual individuals are diverse and many of the missions deal with incredibly dark themes, but it is certainly true that these are some of the most memorable aspects of the title. Completing these quests often rewards you with additional Honour and Fame points, stats which will influence a variety of in-game benefits. Honour affects how other people in the game treat you. The nobler you are the more the people love you, with shopkeepers offering you discounts across their wares. Fame acts in a similar manner, with extra perks being unlocked after news of your deeds spreads across the country. 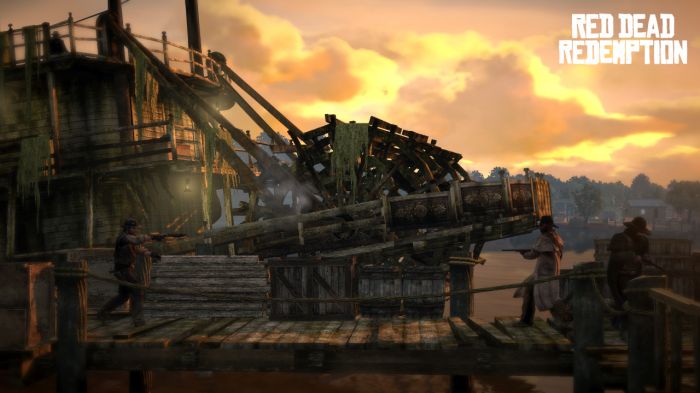 There is so much to see and do across the game world, from night jobs which reward you with extra cash, to gang hideouts which unlock some of the best weapons in the game. Alongside these are hidden outfits to unlock, mini-games to play including poker, blackjack and dice. Marston also has access to a series of "ambient challenges" which can be pursued at any time in a number of areas. Once initiated these tasks require you to fulfil certain criteria, such as collecting different flowers, hunting different animals, following treasure maps and performing feats of accuracy and skill with your guns. They're usually challenging, but completing them yields extra abilities which become particularly useful late on in the game. 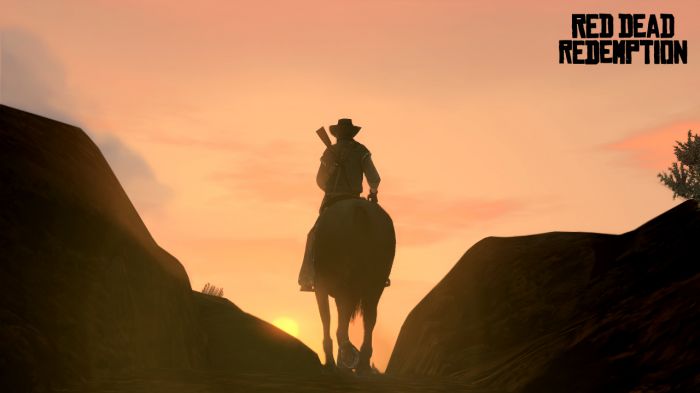 In classic Old West style you can also collect bounties, which are posted up in the many settlements around the game world. Ripping these posters off the wall provides you with a general location, allowing you to stock up on ammunition and medicine before heading out to bring them back dead or alive. Killing them is easy, but doesn't pay, and keeping them alive is where the real fun lies. Eliminating their entourage, shooting them in the foot and then lassoing them, allows you to drag them back to the nearest jail in more-or-less one piece. However, you have to be prepared for their friends riding after you leading to some truly epic horseback gunfights.

As per usual in a Rockstar game, you can unleash your wild side and engage in a host of criminal activities. This initiates a wanted level if you are seen, alongside creating a bounty, which must eventually be paid off to avoid arrest. Unlike Grand Theft Auto IV you can even be pursued by the US Marshalls and bounty hunters who are particularly nasty and track you using hunting dogs. However, it is entirely possible to complete the game without resorting to crime outside of the missions and I managed to finish with absolutely no felonies whatsoever, which felt particularly pleasing.

Red Dead Redemption's multiplayer component feels more robust than Grand Theft Auto IV, providing you with more options to sink into. A free roam mode returns, where you can posse up with some friends before doing whatever you please, against the AI or fellow human players. However, the competitive multiplayer against other players in one of the game's numerous modes is a real highlight. Each round begins with a Mexican stand-off which soon descends into madness, starting the match which is always entertaining and fun. With a recently released free-to-download co-operative mission pack there is even more replay value on offer.

Rockstar Games has managed to create an immensely memorable and powerful gaming experience with a strong story and unparalleled sandbox gameplay. If you haven't experienced Red Dead Redemption yet, then you are truly missing out. Despite very occasional bugs popping up after extended playing sessions, this is a game with few flaws. Whilst it is admittedly similar to the Grand Theft Auto titles, from which it clearly gets much of its source material, the experience is a more streamlined and refined one. Put simply: Red Dead Redemption is a true modern gaming classic and one that you should definitely play sooner, rather than later.

Rockstar Games has managed to create an immensely memorable and powerful gaming experience with a strong story and unparalleled sandbox gameplay. If you haven't experienced Red Dead Redemption yet, then you are truly missing out. Despite very occasional bugs popping up after extended playing sessions, this is a game with few flaws. Whilst it is admittedly similar to the Grand Theft Auto titles, from which it clearly gets much of its source material, the experience is a more streamlined and refined one. Put simply: Red Dead Redemption is a true modern gaming classic and one that you should definitely play sooner, rather than later.