Regalia: of Men and Monarchs Review

Regalia: of Men and Monarchs is a crowdfunded project. I say that at the start because I, and I think most of the industry, can't help but attach a certain stigma to these games. Crowdfunding is unique in that it is a free interaction between the filthy unwashed masses and the developers. On the one hand it stands a better chance of giving the contributors exactly what they asked for, but on the other it will at best only give them exactly what they asked for. Thus you have a game like Monarchs that certainly fulfills all promises to its donors while showing signs of the haste made to satisfy those demands in the form of other deficiencies. But that's enough overly verbose attempts at sounding sophisticated. You, and my editors, want to know whether or not the game's "good".

First the essentials: Pixilated Milk's new title is a turn-based tactics and role-playing game with elements of base building, faint hints of rogue-like elements, and a combat style fans of the genre will notice shares many similarities with the Disenga series. Artistically, the graphics fuse cartoonish 2D backgrounds with at-times blocky 3D modeling to create a visual style reminiscent of a JRPG drawn with a western pen. In combat segments, this style is placed over a tile-based map that can seem reused at times but ultimately contains enough terrain variation to not be too repetitive. Voice acting is present for most of the major cut scenes, and both it and combat happen to a solid musical background; everything from swelling strings and horns to smooth electronic jazz, as the situation dictates.

You play the role of Kay Loren, heir apparent to the fantastical kingdom of Rashtyl. After the death of your father, you and your two sisters journey to your ancestral homeland only to find the place in ruins, the countryside overrun by various monsters, and the ever-shady Furtive Union hassling you over a massive debt your forebears racked up over the centuries. Together with a cast of steadily acquired party followers, you must clear the region of threats, rebuild your city, make alliances with neighboring states, and somehow scrape together enough cash to keep the debt collectors at bay for another story chapter. 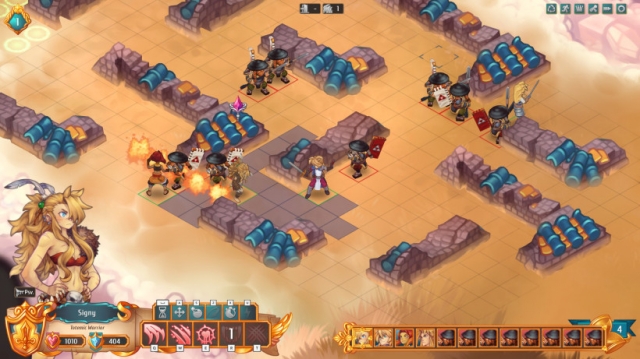 The plot itself is acceptable as far as I'm concerned, and I say that as someone who cares first and foremost about the story of any non-mobile game I play. I never felt in my 15 hour playthrough that the world-builders didn't know how to create interesting characters or build an intriguing fantasy setting. Rashtyl is a colorful and varied environment, with well-written little "codex" entries on the various locations you encounter throughout the game. However it seems that most of their effort has gone into the game's characters, playable and otherwise. I saw this as I built up the personal bonds of some of my party members, helping a young fire mage defeat long-time pursuers hoping to destroy her and helping a wild tribal berserker find her totem animal for instance. I saw it in the commendably funny dialogue from the first moment I heard my ancestor's ghost respond to reports of his kingdom's collapse with "Bullshit son." I even saw it in the little details of the NPCs I encountered in dungeons, like a certain female satyr that may have once been a not-so-female adventurer. It's these little intriguing stories mixed with the larger personal quests of my party members that tells me Pixilated Milk went all out in crafting a world worth the player's time and effort to explore.

Yet despite all this apparent shedding of blood, sweat, and tears, it's also clear that the game was built so that players could experience gameplay and story-driven elements at their own pace. Many of the cutscenes and dialogues are skippable, with little text summaries of major plot developments taking up the ensuing loading screen. The difficulty is presented simply: Story mode for those less interested in combat, nightmare mode for the other side of that spectrum, and normal for those in the middle. Being the indecisive scum that I am, I played on normal and found the combat sections challenging but manageable on the whole.

That's not to say that there are no flies in the crowdfunded soup. Outside of combat, there is a calendar system where almost every action you take consumes a certain number of days, from traveling to upgrading buildings to clearing dungeons. By the time your allotment of days for the chapter are up you had better hope that you've met the requisite number of development objectives or the chapter will be failed. Normally this would serve as a clever mechanic for imposing a sense of urgency on the player, where grinding for resources has benefits as well as drawbacks. Towards the end of my run though, I found it harder and harder to meet the chapter objectives under the deadline. One of the main reasons for this was that I had invested a significant number of days into building my personal bonds with party members and townsfolk, which in previous chapters fulfilled some of the objectives. Now all of those types of requirements had been met, and so I was actively discouraged from delving deeper into the character work the creators had devised without having even unlocked all the party members! Instead, I could concentrate on crafting large quantities of items inferior to the ones I already had, grind difficult dungeons that took large numbers of days to complete, or build international relations by settling diplomatic issues that would pop up from time to time without any control from me. 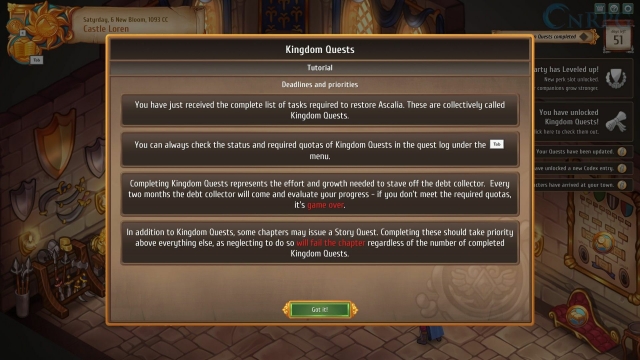 Ah yes, you can also build relations between your growing kingdom and two pairs of rival factions. As stated previously, these groups are well written and do a good job of breaking with traditional fantasy tropes. Settling issues in favor of one faction will allow you to summon their soldiers to help you in battle, but I feel as though the whole system of diplomacy was added as an afterthought. A better system would have included faction quests for me to go on to boost my standing with them, or perhaps require that I devote resources to a situation or project in return for a powerful item like in Dragon Age: Inquisition.

It's the same way with the negotiation system they've set up where you must moderate debates between multiple sides, suggest solutions to their conflict, and keep everyone's satisfaction meter above a certain threshold by the end of the parley or be forced to do the whole thing over. This essentially boils down to a multiple choice quiz that demands a specific set of answers or it needs to be retaken. And surprise surprise, it's also necessary to pass the chapter. I thankfully only ever encountered this mode once in my run. Even then it still took what was an interesting plot element involving a three-way dispute over some land and turned it into a nightmare as I ran through the same dialogues over and over again, trying to find the correct phrases through trial and error. 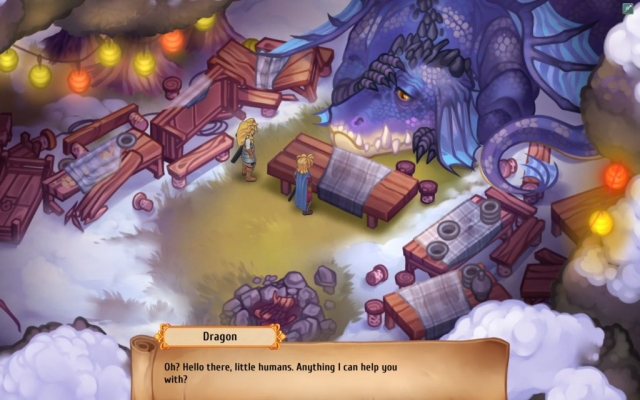 In many ways, this system is similar to the little text adventures sprinkled out on dungeons in between combat scenarios, except those are found in every dungeon and failure to guess the right response to a given situation will be punished with an additional battle segment. Now this needn't be a bad thing if it weren't for those rogue-like elements I mentioned earlier. Regalia's combat system enforces a character perma-death for each dungeon, at least until the party rests at a campsite or finishes the dungeon itself. Even then, every campsite only has one expendable rest and revive, and the larger dungeons only have at most two. Camps are also one of the only places outside of your main base where you are allowed to save, which makes the random application quits I experienced while running the game all the more frustrating.

Regalia: of Men and Monarchs will give the player the fantasy tactics and base-building experience that its backers demanded, paired with writing that but for a few typos is satisfactory at the very least. Those that can overlook some of its rough edges and awkward extraneous mechanics that have yet to be fully realized will certainly enjoy this game. Once those requirements were fulfilled, I certainly did.

Regalia: Of Men and Monarchs (Reviewed on Mac)

Regalia: of Men and Monarchs will give the player the fantasy tactics and base-building experience that its backers demanded, paired with writing that but for a few typos is satisfactory at the very least.

Misspelled his favourite type of fish.

Regalia: Of Men and Monarchs