It could be suggested that the title of Capcom's latest release, in relation to the game's themes or concept, is a message from the game itself to the player, as if it is pleading to not be forgotten amidst a year of great upcoming titles and the overwhelming excitement regarding the next generation of gaming. Yet, the title is, in itself, a huge juxtaposition as, despite its pleads, Remember Me is an experience that is easily forgotten, regardless of its huge potential: a great concept, an exciting world and some genuinely interesting ideas behind it. Yet its clunky gameplay, severe linearity and reluctance to take risks hinder it from being an experience that is what it, the game, tries so hard to be: unforgettable.

Set in Neo-Paris 2084, Remember Me tells the tale of Nillin, a Memory Hunter who awakes in a facility to find her memories stolen, and of her quest to get them back. It's a world where memories are like drugs: easy to get, pleasurable to experience but difficult to break the habit - addicts who have allowed themselves to be controlled by their relentless need to remember prowl the lower levels, whilst those who see the use of memories as a pleasant pastime have thrived in the higher districts. Neo-Paris is a world divided by the have and the have-nots, the wealthy and the poor, and it's a stunning place to be. One of Remember Me's strongest points is that of its setting; it's flat-out gorgeous, although its philosophy fits neatly into 'style over substance'. The level of detail in every inch of this world is simply staggering: faded graffiti stains the walls like blood, trash piles high in every corner it can fester and the holographic adverts splayed across the area blindingly twinkle, acting as a constant hint towards the consumerist society Neo-Paris is clearly based upon. Personal robot servants run around and do their master's shopping, clean toilets and run bars; butchers chop meat and judge each other by their clothes and the way they walk and talk. Neo-Paris is a setting brimming with personality as, despite its futuristic nature, it's still undeniably European with the architecture being successfully reminiscent of those one may find in Paris or Amsterdam.

It's a world begging to be explored so it's a shame that the opportunity to is never granted. One of Remember Me's various flaws is its linearity where a path so distinct exists that every single ledge in the games multitude of platforming segments is highlighted by a yellow floating arrow. The fault is that player can only go one way, unlike Uncharted where a slight diversion or alternate paths sometimes occur. It's this limitation that makes Remember Me less enjoyable than it could have been, as every second raises the question about why it's impossible not to: when the world is as richly detailed as it is, it's puzzling as to why the developers have chosen not to make the title open world, an addition that could have made Remember Me so much more compelling. 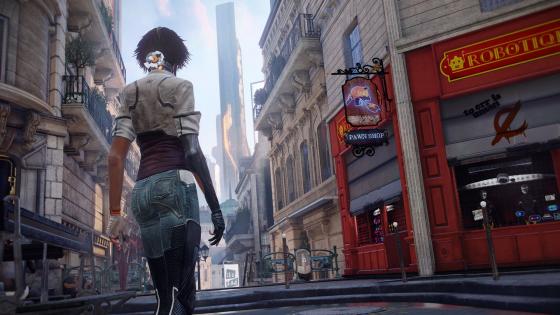 And it is compelling. It has a good concept with an interesting - if poorly told - story and a great world, yet all of that is let down severely by the game's refusal to take chances. Despite its initial inventiveness, at least on the surface, gameplay in Remember Me is annoyingly safe, relying on tried and tested formulas of old in order to create a title that just fundamentally works instead of delivering an experience on a level similar to its concept. The game is made up of three main elements, two of which have appeared in games for the last decade and another which is genuinely clever and interesting, but never has its time to shine, appearing in only a small handful of times throughout the entire story.

Fighting in Remember Me is clunky, limited and repetitive, regardless of whether it takes a leaf out of Arkham City's combat styles or not. Punches and kicks lack impact and the endless monotony of vaulting over enemies heads to deal a single attack into their back becomes boring fast as players quickly find themselves 'going through the motions' instead of strategically taking foes out individually. It's frustrating then, that the combat is so dull, because behind it is a genuinely interesting idea: the concept of being able to construct one's own combos, each tailored to their playing style. Earning XP grants Nillin, who the player is controlling, Pressens that can be assigned to slots on a combo chain, each with their own ability, whether that is to grant extra health or deal more damage. If the combat were as exciting or strategic as the combo idea needed it to be, then the construction of individual chain attacks would be a fantastic implication, yet it unnecessarily falls flat on its face because it's just rendered pointless. 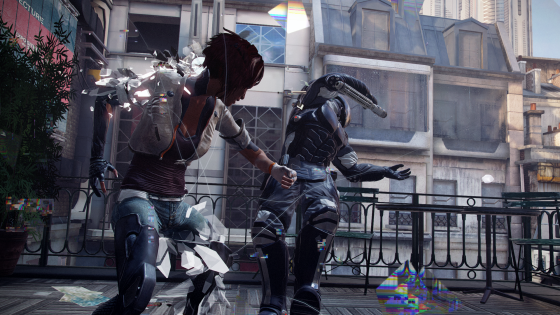 The same goes for the platforming sections also: it's almost patronising linearity makes it a chore to play through, regardless of how high Nillin may be climbing or what she might be scaling. For scenes like this to work, there needs to be a sense of danger, of possibilities existing where that jump may not be made, where that pipe may crumble and fall and where the sense of vertigo is almost numbingly high. Yet in Remember Me, this doesn't exist: there's never any doubt that Nillin will reach the other side of that gap and whilst she does reach extraordinary heights in various moments, the restrictions of the camera stop the player from ever glancing downwards and realising that one stupid movement could bring about her death. Not that she will ever die, of course.

With gameplay this monotonous and simple, Remember Me would normally fail, but strangely, it doesn't. Its brilliant concept and genuinely good ideas keep it afloat, if only to a point. Developers Dontnod have, with the idea of memories and their importance to the world of Neo-Paris, done some incredibly interesting things with Remember Me as there are a few moments throughout the game that blindingly suggest that, with a little more money and a little more time, this could've been something genuinely spectacular. The concept of memories exists beyond the story and feeds into the gameplay with instances in which the ability to relive past events or alter them, as Nillin has the ability to do, actually becomes crucial to progression.

A scene early on with a character called Bad Request requires Nillin to download some of his memories and then follow them through an apartment block in order to get to where she needs to go. Activating certain icons allows the player to witness what Bad Request has done before replicating it, allowing them to dodge robot guards and scale the building to safety. It is, of course, a limited idea but it single-handedly proves that Dontnod do have some particularly interesting things they want to do with the world and the gameplay in relation to the game's set-up, and only makes it the more frustrating that this potential is never realised. 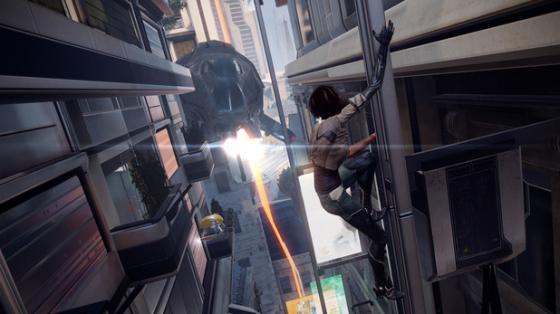 Remember Me's best parts, however, come with the scenes in which Nillin literally alters the memories of targets in order to change the person they are. At the end of the first mission, Nillin is attacked by a bounty hunter and, by stealing the assassin's memories, she changes an event in their past that made them have their reasons for attempting to kill Nillin, an alteration that, through success, actually turns this assassin from a foe into an ally. Changes are made by rewinding and forwarding the memory as though it were a video in search of items that can be selected, thereby changing them: combining the correct alterations in order to fulfil the objective completes the sections. When the segments are as well done as they are, it's annoying that there aren't more of them as they're interesting and good fun to tinker. But, like the rest of Remember Me, the less of these there are, the safer the game becomes.

Remember Me is by no means at all a bad game: regardless of its fault, it's worthy of a much higher status than that. However, it's the most frustrating title of the year so far, not because it doesn't work or it's just generally awful but because of the hugely untapped potential that sits brimming below the surface just waiting to get out. It's also a game that, despite its many flaws, feels destined for cult status and maybe that's what Remember Me needs: recognition not just because it's good but because of the aforementioned potential such a high-class concept has, potential that could be reached in the sequel that both its fans, and the game itself, craves for. It's this untapped potential that could turn Remember Me from a solidly good, enjoyable action franchise to a genuinely unforgettable one.

Remember Me (Reviewed on Xbox 360)

Remember Me is by no means at all a bad game: regardless of its fault, it's worthy of a much higher status than that. However, it's the most frustrating title of the year so far, not because it doesn't work or it's just generally awful but because of the hugely untapped potential that sits brimming below the surface just waiting to get out.

This looks really good, I have to say I'm a bit of a sucker for a female protagonist.

It is a solidly good game...it's just the potential of it is so high that it's impossible to not feel that Remember Me could be so much more than it is. 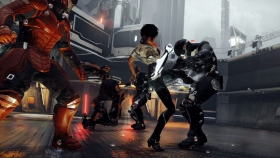