2002 was a big year for Resident Evil. April saw the release of arguably the series’ greatest entry; the Resident Evil remake, and Resident Evil Zero followed merely six months later. Despite receiving universal praise upon its original release, Zero has become one of the forgotten gems in the now bloated franchise. After the release of Resident Evil HD Remaster last year, a re-release of Zero seemed inevitable.

This update brings to Zero the same improvements seen in last year’s remaster: a larger resolution, graphical improvements, and other additions. The original game was displayed in 4:3, and now uses a pan and scan technique to stretch the image to produce a 16:9 1080p resolution. This new framing is a zoomed-in view of the original image, so as you move, the camera will follow to reveal the cropped areas of the background. I found this movement distracting, and used the original display setting instead. 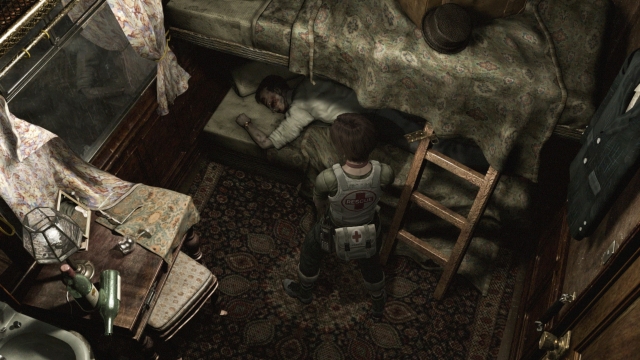 The textures and the artwork have been touched up, and adjusted in places. Even on the GameCube all those years ago, these backgrounds looked fantastic, with the finer details even clearer in HD. Matching the quality just wouldn’t have been possible using polygons at the time, and many games to this day fail to compare to the work seen here. Texture work has been improved when it comes to viewing items in your inventory too, and in other places, but don’t meet the standard many gamers might expect in 2016.

This is particularly the case with the door transitions. Despite being something the older Resident Evil’s are famous for, they haven’t been given as much care as I expected; an improvement over the original game, but they are still far too low-res. It baffles me that no one thought to remake the doors, as each time the game cut to a shoddy texture and darkness between each room, my interest dwindled.

The character models for Rebecca and Billy, along with the zombies, have been appropriately improved for the remaster, but Rebecca's new glassy eyed stare chilled me far more than any of the slimy leech monsters or zombies. The vast difference between the quality of the characters and the backgrounds is at times jarring, making it far more apparent that they are moving across what is essentially a painting. 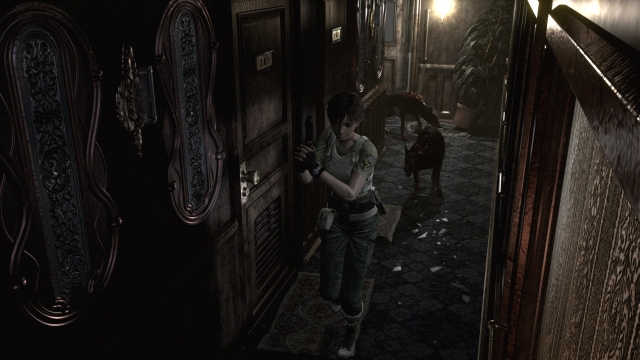 I also had problems with the new control scheme which removes the original tank controls, and replaces it with something more modern. It makes moving between the camera transitions fiddly, and Rebecca no longer feels as anchored to the background, instead gliding around each room, massively reducing my immersion.

Resident Evil Zero’s opening moments easily rival those of its peers. Luggage lies strewn about the cabin. The seats are stained red with blood. The combination of the empty train carriage, the slow thud of Rebecca’s footsteps, and the gentle rain against the windows creates an atmosphere reminiscent of those first steps into Spencer Mansion.

Zero was created in the same style as the remake, using the pre-rendered backgrounds and fixed camera angles to craft a horror experience in many ways still unique to these titles. Much like in cinema, the placement of the camera can be more important than what is happening in the scene. A moment during the opening train sequence stood out to me: in one room, the camera is placed below Rebecca, The ceiling fills the frame, and with every window visible as she continue on, you wait for something to come crashing through. It builds tension in a way that a third-person, over-the-shoulder view never can. While you do hear the monster scuttle across the roof above, it is in some way unnecessary, as I was already filled with dread without yet knowing there was something out there. 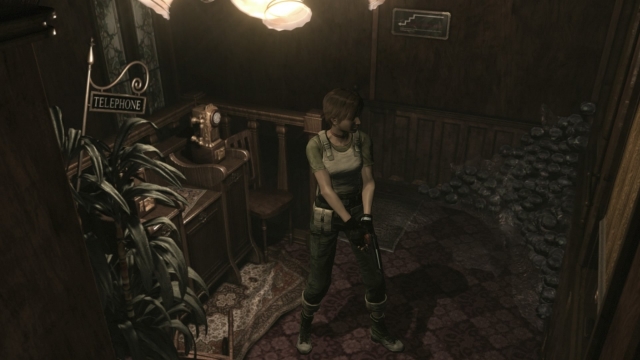 Within the first hour of Zero, you can see elements of what Resident Evil would later become, with an increased focus on combat, and the introduction of an AI partner, Billy. At any time, you can switch control between Rebecca and Billy, who each have their own strengths and weaknesses; The majority of the time you’ll be changing in order to solve a puzzle. This is introduced as Rebecca is stuck in a room with only a locked door and a dumbwaiter. Billy must help her escape. Requiring you only to change character a couple times to exchange an item using the dumbwaiter, this is a simple task, but later puzzles require more switching and the use of both characters. Having a partner also helps because you can carry twice as many items, but then managing the two is twice the hassle.

Another new mechanic removes the bizarre reality-breaking item boxes from Resident Evil where you could put an item in a box on one side of the mansion, and pull it out of a box somewhere else. Now, you can drop items you are carrying and pick them up again. It makes far more sense logically, and is more forgiving. It won’t leave you kicking yourself because you forgot to leave that empty shotgun in the chest and now you have to travel all the way back, risking precious resources. Warning: If abused, this system will screw you. By allowing you to drop items anywhere, you may end up leaving important items in areas hard to return to. It’s no longer a matter of simply returning to the nearest saferoom, you may have to travel much further than you did in Resident Evil remake. 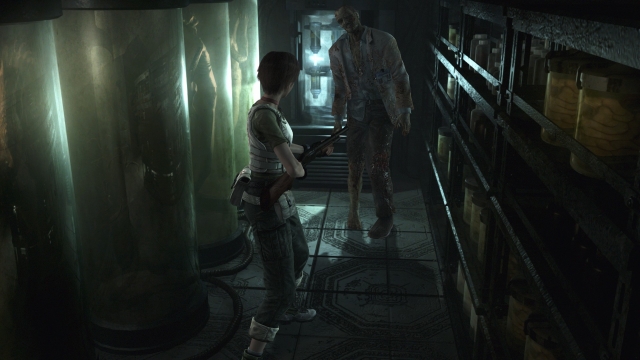 The train works well as a first area, negating the problem some had with the Spencer mansion -- getting lost. You can only ever go left or right, and there are six carriages. This more linear area and simpler puzzles, with clear instructions, work together to make this a far more accessible opening, but don’t be fooled yet…

Before long, you find yourself in a mansion. Not Spencer mansion though. Another mansion owned by Umbrella, and this one a training facility. It’s big, it’s full of locked doors, and it’s everything people want from a Resident Evil sequel. Oh, and it’s hard again. There are only ever a couple of zombies or dogs to face on the train, but any direction you go in this mansion leads to a group of hungry flesh-eaters, or a room primed to release poisonous gas.

Despite having all of the tools that were used to create the masterpiece that is the Resident Evil remake, the master is visibly absent. Directed instead by Koji Oda, Resident Evil Zero is missing the signature touches of Shinji Mikami, most notably his attention to pacing and creating character through level design. Each room of the Spencer mansion was memorable, but I struggle to put together a map of the Umbrella facility in my head. The original mansion itself was designed as much like a puzzle as its individual rooms, with an optimum path to clearing it. This is missing from Resident Evil Zero, as the placement of items in the world (along with the ability to drop any item as you go) loses relevance. 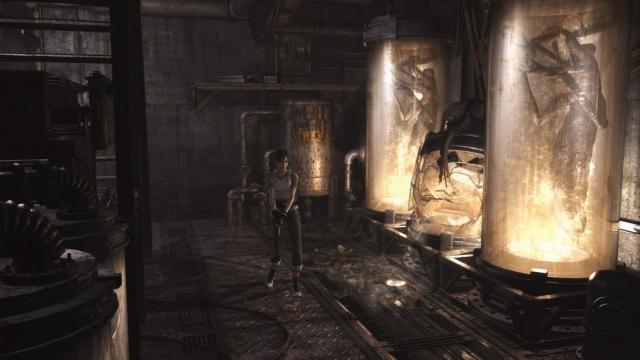 That tightly knit environment, and being encouraged to backtrack to explore previously locked off areas again is a blessing for fans after the direction the series took after Resident Evil 4. Being scared of that lone zombie as you fight to get to the next save point… That was Resident Evil.

Most likely the core entry the least people have played, it’s good to finally see this make the leap from the GameCube to modern consoles and PC. At the time, Zero felt to many like a step back, too hung up on retreading the same steps as the entries before it. Releasing now, ahead of the Resident Evil 2 remake, it is in a much stronger position. As someone not old enough to have played many of the first games, Zero now feels like a welcome sequel following last year’s remaster. There will be people who don’t enjoy Resident Evil Zero HD Remaster, with it’s aged visuals and dated game design but for longtime fans of the series, and new fans after last year’s remaster, Zero HD kicks off the start of the 20th anniversary celebrations, with hopes of better things to come over the coming months.

While carrying the same improvements to the resolution and artwork as seen in last years Resident Evil re-release, Resident Evil Zero still cannot escape its status as the weakest of the original Resident Evil games. A retread through scenarios already set in previous entries, it brings no redeeming features of its own.

Hey I think you are an idiot

Hey man, that's rude! He's only a bit of an idiot!

My mind is changed due to your fluid prose. I will get this game because it is obviously a 15/10 game, as explained by the points you listed.

In all fairness, any review of any game that is not a 10/10 or made by an unconditional fan is a bad review. And the author an idiot. Basic rules of game journalism.

I rated it a perect 5/7, so I agree with our sensibly named friend up there.