Capcom have recently come under significant criticism from long-term Resident Evil fans following the gradual removal of much of the horror in favour of action-heavy gameplay. Resident Evil: Revelations, originally released over a year ago for the 3DS, seems to have been largely developed as a response to the backlash. Choosing to focus more on resource management, puzzle-solving and avoiding enemies the gameplay certainly harks back to days gone by.

Resident Evil: Revelations follows a number of protagonists over the course of its roughly six to seven hour runtime. Much of the narrative focuses on series' veteran Jill Valentine and newcomer Parker Luciani as they search a seemingly deserted ship, the SS Queen Zenobia, adrift in the middle of the Mediterranean. Tasked with tracking down the missing Chris Redfield and his irritatingly vapid sidekick Jessica Sherawat, the two soon run into bio-organic weapon related trouble. 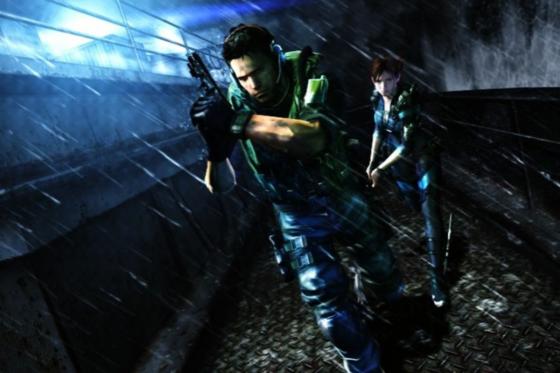 The SS Queen Zenobia is sadly far from a luxury cruise liner and the halls are filled with shambling, dripping monsters collectively known as Oozes. Within moments, the gameplay is recognisably old-fashioned without feeling like a step-backwards. Gone are most of the action-orientated trappings of Resident Evil 6, replaced with a fusion that combines elements of the fourth title and even its predecessors.

While the camera retains the over-the-shoulder third-person perspective from Resident Evil 4, the seemingly endless, ever-more-ridiculous creatures and associated lengthy gun fights are largely absent. Instead, much of your time will be spent searching the unsettling, steely corridors for ammunition, healing items and puzzle solutions. All the while trying to avoid, or kill, the shambling monstrosities that are desperate to devour or eviscerate Jill and Parker. 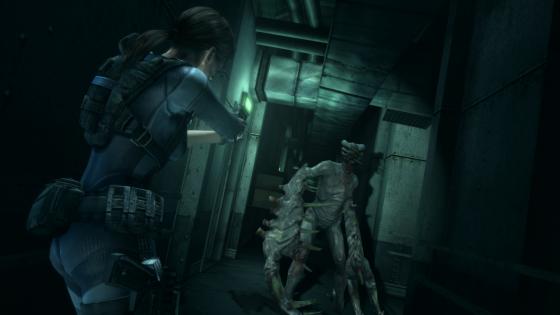 The tight corridors and narrow passages create a claustrophobic atmosphere: dodging and evading monsters is genuinely unsettling and requires significant skill. Ammunition is usually scarce and must be managed carefully and gunning down every enemy is best avoided with bullets preferably being saved for the tougher creatures. Thankfully when you are required to shoot, the controls feel fluid and effective and the camera is competently handled and implemented. Occasional auto-aim problems sometimes appear with your crosshair developing a mind of its own for a second, requiring you to re-orient it: a problem that can mean life and death. Fortunately these occur rarely.

A new addition is the ability to dodge incoming attacks with a carefully timed press of an analogue stick and a button. It's a difficult skill to master and occasionally feels unresponsive, leading to some rather unfair hits. This can be particularly exasperating when facing some of the rarer monsters who have the ability to one-hit kill your character. It is usually a fairly infrequent occurrence but definitely could have used a slightly more developed implementation, such as being able to dodge left and right rather than forwards or backwards.

One of the other key gameplay changes is the inclusion of the Genesis, a device that allows players to search the environments for hidden items, ammunition and upgrades. What could have been a minor gimmick instead becomes a valuable tool and is essential to success. The Genesis can also scan and analyse enemies and samples that can be found in the environment. Doing so builds a percentage meter, with successive scans on the same enemy types gradually rewarding less-and-less bonuses. When the meter builds to 100% an extra healing item is awarded, which is often life saving when fighting bosses and swarms of creatures. 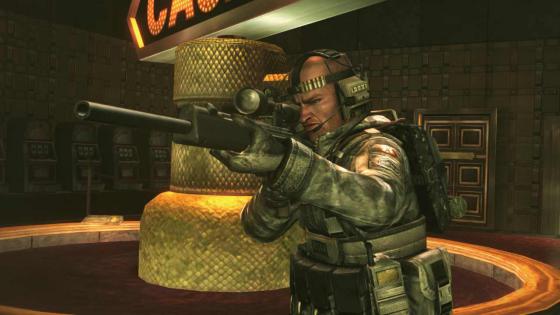 Weapons have also been handled fairly differently in Resident Evil: Revelations, with the inventory system from past games being replaced with something more akin to Resident Evil 6. Characters can carry up to three weapons at a time, including support items such as grenades which can be swapped and upgraded at item boxes found across the ship. Upgrades can be found in the environment, hidden away requiring a Genesis scan to discover or dropped by tough enemies.

Each gun has a number of possible slots that can be filled with these custom parts with characteristics including firepower, fire rate, reload speed, stopping power and many more being able to be tweaked according to player preference. It is a really solid system and the ability to constantly manipulate your load-out to reflect the amounts of ammunition you currently possess and the type of enemies you face feels like a satisfying gameplay inclusion. The fact that many of the enhancements require careful exploration to discover, potentially with greater dangers guarding, is a solid risk-reward mechanic.

While two characters are constantly present throughout the campaign there is a lack of co-operative gameplay. Rather than a drawback, this is a definite benefit for the overall more horror-orientated approach that Capcom have taken and Resident Evil: Revelations benefits from solo play by harking back to the earliest entries in the franchise. The locations that litter the campaign are varied and go beyond the shadowy hallways of the SS Queen Zenobia to snowy mountains and modern offices. It's a refreshing change and the way the story unfolds is surprisingly adventurous and twisting for a Resident Evil game. 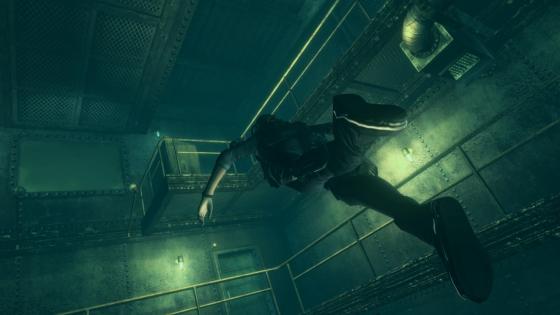 The game makes the most of its aquatic setting with water-based enemies and some pleasingly tense underwater sections. Swimming controls are well developed and despite occasional camera issues, they make up some memorable sections as characters have to escape from rising water while competing with plenty of monsters along the way. Sadly there is a distinct lack of nautical-related puns but the trademark, erm, "high quality" Resident Evil dialogue remains as unintentionally hilarious as ever.

However, the campaign is not without its flaws. There are numerous graphical glitches, especially with enemies clipping and objects in the environment not displaying correctly. The story is broken up into a series of chapters and sub-chapters, which feels very much like a hangover from a handheld title. Plot events are retold at the beginning of every new chapter, despite the fact you will have completed them a few moments before. Graphically too, the HD visuals look crisp and clean but the textures fail to compete with many other titles. The limited length of the campaign may also frustrate some but Capcom have added a number of options to help bolster replayability.

The story itself can be repeated, carrying over any weapons and items you have collected and there are a variety of unlockable firearms to acquire, usually from scanning hidden handprints with the Genesis or one of every different enemy type. Yet, the real extension of gameplay comes in the form of a bonus Raid Mode. This separate spin-off is playable online with another player and brings to mind the faster arcade style of The Mercenaries mode from previous titles. 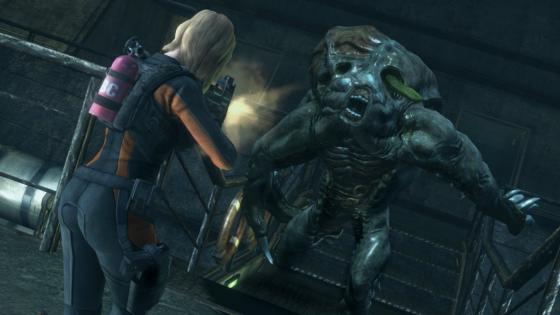 With twenty or so stages, with extra bonuses, two players can battle various levelled enemies while gathering experience and currency with which to improve their characters and weapons. Stages are usually small areas from the campaign, populated with different varieties of enemies with each stage having a recommended level associated: the higher the number the tougher the foes.

Much of the replayability in Raid Mode will come from building up your character and earning BP, a form of currency that can replenish healing items, ammunition and purchase new weapons and upgrades. To begin with you will only have access to a simple handgun but playing through levels and levelling will unlock drops, such as shotguns and rifles that can either be sold for BP or kept and used. Similarly, upgrades and custom parts will occasionally drop from defeated enemies allowing for players to tailor their load-outs.

Typically maps take under ten minutes to complete and are quite fun and fast-paced, especially with a friend along for the ride. However, the stages tend to get a little repetitive and occasionally replaying earlier challenges over again to earn experience bonuses is necessary to beat a particularly difficult map. At times it can make it feel like RPG grinding rather than fun progression.

Raid Mode is a radically different tonal shift from the main game, reflecting the fast-paced action from Resident Evil 6 instead of the more muted horror from the campaign. Arguably it would have been better to give players one or the other, instead of attempting to appeal to all audiences as neither experience feels entirely complete or ultimately as satisfying.

Resident Evil: Revelations is arguably the best recent entry into the series after the disappointing fifth and sixth instalments. While it does not wholly commit to returning to the origins and roots of what made the franchise great, it is pleasing to see Capcom giving the fans something along the lines of what they have been asking for. The campaign has its fair share of jolts, shocks and monsters and enough survival to warrant a survival horror categorisation.

Despite its brevity and some handheld shortcomings Resident Evil: Revelations has much to recommend it. Raid Mode is more than a passing mini-game and while it may get repetitive, if you and a friend are big fans of the series there are doubtless many hours of fun across its action stages. However, if you are a player more concerned with the single player horror then the title is more anaemic than full-blooded. While it is never full-steam ahead terror, Resident Evil: Revelations is not a Titanic disaster.

Capcom have recently come under significant criticism from long-term Resident Evil fans following the gradual removal of much of the horror in favour of action-heavy gameplay. Resident Evil: Revelations, originally released over a year ago for the 3DS, seems to have been largely developed as a response to the backlash.