Sometimes I wonder why so many first person puzzle games share such a similar aesthetic with Portal. I think it’s because the core idea of being trapped somewhere, needing to solve puzzles to escape, works so well - but I personally find it a little strange that all the agencies, laboratories and weird space prisons of the gaming multiverse all use the same white paint in their test chambers.

ReThink is another such white-walled prison that tests the player’s spacial awareness with increasingly difficult - and convoluted - puzzles. You play as a prisoner in the year 2275, a time when thieves, murderers and embezzlers alike can prove their worth to society by moving some lasers around and jumping far further than the average person. As with every game in this genre, things aren’t all they appear to be. Former inmates/test subjects have left notes hidden around the chambers, though they don’t really drop hints as much as they make sure the player is on the same page as the developers want them to be.

The main mechanic involves the player placing blocks that can redirect differently coloured lasers into the appropriate receptors. Think the Discouragement Redirection Cubes from Portal 2 but with more colours, and you can walk through the lasers without hurting yourself. The lasers have very little impact on each other, and differently coloured beams can cross with no change either way. However, if you redirect beams with one cube at a point where they cross the resultant beam will be a combination of the colours going in. For example, redirecting a blue and red beam will make a magenta beam, and redirecting green, blue and red will make white. This is limited to the primary colours, and I never had to combine a magenta beam with a cyan beam. There was also no way to split combined colours back down to their constituent parts. All of the challenge in the later game came from having a very specific solution in a large, hard-to-navigate room.

Two things made ReThink difficult to navigate: Firstly, the platforming was very loose and I very often found myself either jumping over or not quite making a platform. Secondly, some levels use the single most infuriating mechanic in the game: the floor lighting puzzles. These puzzles ask you to stand on all of the panels on the ground exactly once, and only stepping off on very specific places which ReThink does a terrible job of explaining. A thin red border that is barely visible unless you’re across the room because of the brightness of the floor is not really enough tutorial. Another factor that is not helpful is how sometimes the game just decides that you’ve activated the panel you’re standing on twice and resets the whole puzzle. That happened to me far too often and if I was doing something wrong I never worked out what it was.

The audio is a mixed bag, with the atmospheric music that really gives you one of the best insights into the world being overpowered by the foley. The footsteps especially sound completely unbalanced in comparison to the rest of the game, and I ended up turning the sound effects almost all the way down so I could hear the great soundtrack without the near constant sound of an elephant walking on a gravel path interrupting. 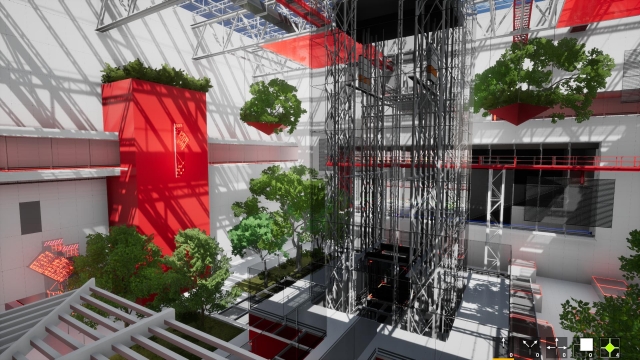 ReThink struggles with the same kind of thing that almost every game in this genre is hindered by critically: Portal (and Portal 2 by extension) exist, and so they always get compared. ReThink isn’t as clever or as challenging, its writing is slow and transparent and its mechanics aren’t as tight or intricate. But, it scratches an itch and it does so more than competently. I enjoyed playing it, and I’d recommend it to anyone who - like myself - has been through all the games that trickle out in this genre. ReThink doesn’t do anything I haven’t seen before, but that doesn’t make it any less satisfying when I solve a room I’d been stuck in.

A competent puzzle game that struggles to live up to its inspirations, but worth playing for fans of the genre nonetheless.