Milestone is certainly no stranger to racing games. Over the years, the Italian developer has worked in tandem with a litany of motorsport governing bodies and covered a wide variety of events, be they two- or four-wheeled. World Rally Championship, Superbike Championship, Motocross World Championship; you name it, Milestone’s probably had its finger in that particular pie at some point. This is a studio that prides itself on doing the utmost justice to each brand, with a degree of attention to detail that comes from nearly two decades of working to recreate something the team clearly has passion for. Milestone’s latest effort, RIDE 3, while not tied to any specific events or brands is no less a love letter to two-wheeled motorsport than its prior work on the MotoGP and SBK series.

Make no bones about it, though: that passion and attention to detail combine to form a game that is unabashedly a simulation. Those who are seeking casual pick up and play insta-fun would definitely be better off looking elsewhere, as RIDE 3 is more than somewhat unwelcoming to the uninitiated. RIDE 3 does very little to ease newcomers into the game, besides the neatly tucked away School of Speed, ostensibly a series of tutorials but in reality little more than a set of time trials that challenges players to navigate specific corners quickly enough. Should you fail one of these tests, the game offers no viable feedback on where they might have gone wrong, content with coldly informing you that you failed. This makes the School of Speed largely useless if you’re new to the scene and want to be taught the basics. Don’t know when to brake? Don’t know when to use the front or rear brakes? The School of Speed’s got nothing for you. 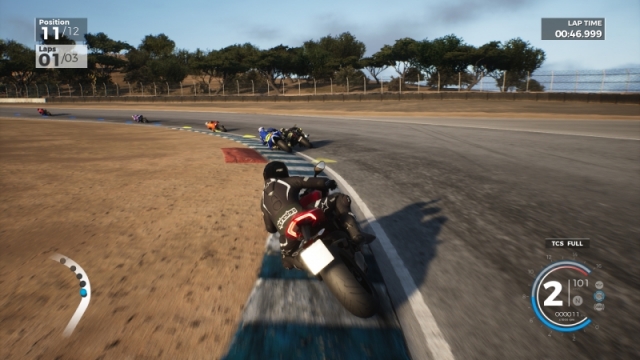 If you're new to motorcycle sims, prepare to spend a lot of time eating dust.

That’s not to say that RIDE 3 makes absolutely no attempt at accommodating novices. In keeping with its past motorsport outings - and modern racing games in general - Milestone has included all manner of aids so that players can tweak RIDE 3’s difficulty. The usual assists such as anti-lock braking, automatic gear changes, an ideal racing line to follow and a rewind function are all here, alongside a slew of other facets of the authenticity that players can fiddle with to tune the experience to their liking. RIDE 3’s opponents are no slouch even with their difficulty turned down, though. As someone who’s far from an expert on motorcycles, I chose to ease myself in with the AI difficulty on its lowest setting and all the assists turned on and I still had a tough time keeping up with the pack while I learned the ropes.

The flipside of RIDE 3’s resistance to cater to beginners is that it presents the motorcycle racing aficionado with their dream game. It might not have the backing of MotoGP, but it does boast over 230 officially licenced bikes to race around 30 locations; a mixture of real-world famous tracks and fictional street circuits inspired by and/or based on various cities and countries. The bikes themselves can also be upgraded with better parts and also tuned before each race, allowing you to alter your chosen ride’s performance to suit whatever track you’re about to race on. 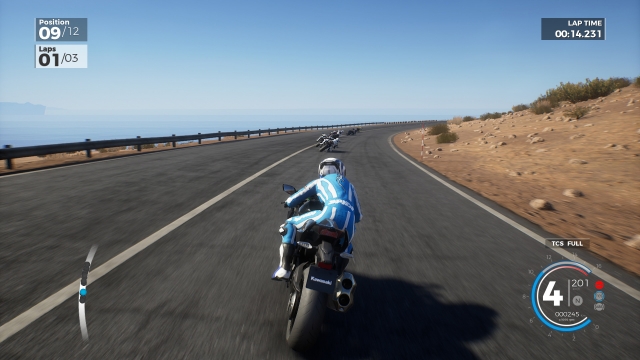 Some of the street circuits really let you go full throttle.

And racing is something you’ll be doing plenty of because RIDE 3’s single-player career mode is exhaustive. There are seven tiers of events comprised of standard circuit races alongside drag races, point to point sprints and endurance races, to name only a few. Depending on how you fare in these events, you’ll be awarded stars which unlock further tiers of races in which to compete. Additionally, placing high in events rewards players with credits with which to buy new bikes and parts. Bonus credit multipliers are also handed out should you decide to turn off some or all of the available assists off, meaning that the better you get at the game the more you’ll be rewarded in the long run. Furthermore, credits are awarded across all of the career, quick race, time trial or online modes, making for a pleasing and tangible sense of accomplishment and progression no matter where you choose to spend your time.

Speaking of online, RIDE 3’s multiplayer suite is pretty barebones. Public races see players voting on which class of bike they want to race with and in which location, while private races allow for a greater degree of customisation. Races were quick and easy to get into, but the quality of the races was all over the place. Some races ran fine, while others saw my opponents flickering and sliding all over the place and one of my fellow racers even spent an entire match - on my screen, at least - skidding around on his side. Rounding off the package is an impressively robust livery editor, letting the more artistically minded bike fan personalise any ride they wish. These custom creations can also be uploaded to and downloaded from RIDE 3’s servers. 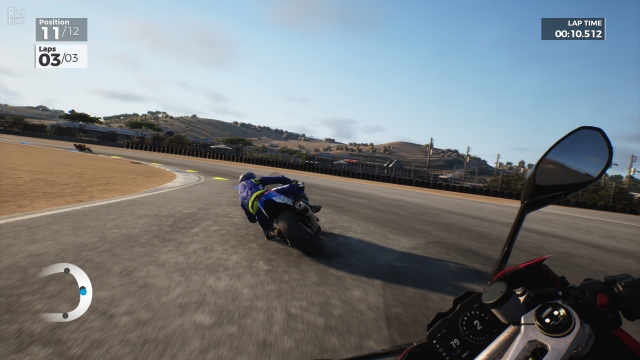 In first person, RIDE 3 can be exhilarating.

RIDE 3 stumbles somewhat in its presentation, exhibiting the same uneven level of polish as most of Milestone’s past work. The bikes themselves look great, however the environments run the gamut from downright impressive to bland and soulless. The rain effects - specifically the water that gets kicked up behind the bikes themselves - could have used a lot more work. However, one area in which RIDE 3 doesn’t disappoint is in its performance, managing to maintain a steady frame rate regardless of how many opponents there are on screen and conveying an exhilarating sense of speed that makes careening down a country lane at over 150 mph an absolute joy, especially in first person. Aurally, RIDE 3 is exactly what you’d expect, suffice it to say that if you get a kick out of hearing a dozen high-powered two-wheeled speed machines bombing it around a track, you’ll likely be pleased with this game’s sound.

Unevenly polished and uninviting to novices, RIDE 3 is nevertheless a decent simulation that motorcycle enthusiasts will get plenty of mileage out of.