Another week, another procedurally generated roguelike. Risk Of Rain has been around for quite a while now, it released on PC in 2014 after a successful Kickstarter campaign. The game was originally just a student project, created by two friends while at The University of Washington. Since then it has gone on to garner a large fan base, with the reddit page playing host to an active community of contributors.

Two years later, with the help of Code Mystics, Risk Of Rain has recently released on PlayStation 4 and PlayStation Vita. One of the things I really disliked about the Windows version of the game was the reliance on port-forwarding to run multiplayer. This is no longer an issue, the PlayStation versions of the game run off servers, allowing players to jump in with others at the push of a button. There is also cross-play multiplayer, alongside couch co-op as well. So right from the off, one of the most annoying things about Risk Of Rain has already been fixed. The cross-play is an excellent addition to Risk Of Rain, it’s the perfect game for morning commutes. Giving players the ability to carry on playing once they leave the settee, carrying their progress around with them as they travel. If a few friends are short of a controller but have a Vita lying about, they can also join multiplayer using that as well.

Gameplay in Risk Of Rain centers around “runs”, much like other roguelikes players must pick a character and play through levels , defeating bosses and collecting upgrades. Each run varies depending on the upgrades collected, with some obviously being better than others. This can be quite annoying at times as it becomes evident quite early on in a run whether you are likely to be successful in the later levels. So it becomes about learning which items are beneficial. 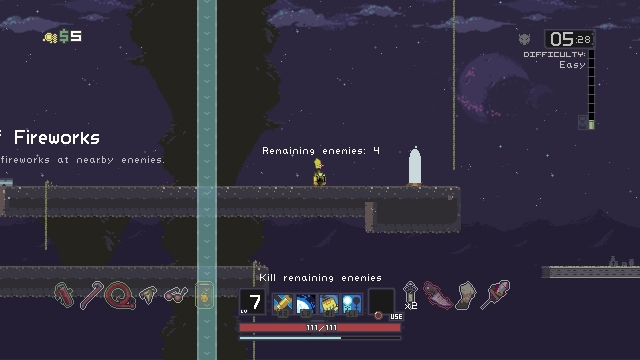 The game plays from a 2D side scrolling perspective, with aspects of platforming mixed in as well. Each of the characters have four abilities, all related to the character’s playstyle. They are all mapped to the shoulder buttons and have cool down times depending on how powerful each respective ability is. Gameplay becomes about balancing each of the abilities based on the current situation your character is in. The various characters are unlocked through different objectives in-game, it took me around five hours of playing to unlock a few characters, so there is plenty of content for people to sink their teeth into.

Risk Of Rain is definitely one of the most visually busy games I have ever played, during the busiest segments the screen is filled with enemies, bullets, gold and even blood. It can sometimes become a little too noisy and makes distinguishing characters from enemies difficult, this is troublesome as dodging enemy attacks becomes much harder. The view is a little perplexing at times as it is pretty far away from the action, I would really enjoy the choice of zooming in a little, just to make precision and evasion a little easier.

This game is no walk in the park, Risk Of Rain is seriously punishing. The end of each level features a boss on top of endlessly spawning enemies that you must survive for 90 seconds. To survive these onslaughts players must get used to finding the upgrades hidden throughout each level, only then is it possible to beat the various bosses. Some might find the difficulty far too frustrating, but I personally found it endearing and it kept me coming back to better my runs. 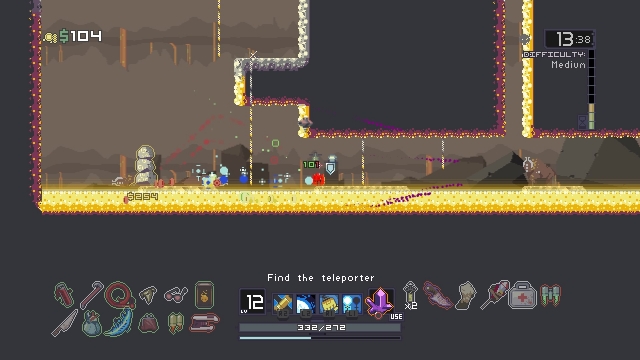 There’s a real joy to be had playing roguelikes, I’ve put hundreds of hours into The Binding Of Isaac, but I originally really struggled with it. As I put more and more hours into it, I learned the intricacies; enemy attacks, upgrades, character abilities and even how to cheese the game in places. I feel the potential in Risk Of Rain, there are a few secrets I’ve found and enemies I am yet to understand. I look forward to diving even deeper into it’s world, and finding everything it has to hide.

After initially skimming past Risk Of Rain due to my annoyance over the port forwarding stuff, I feel rather silly. What I missed out on was the chance to immerse myself in a stellar roguelike, one of the very few that measures up to the king of the genre, The Binding Of Isaac. The difficulty is probably going to be an issue for a few people, but most will enjoy the learning curve. If you want a solid experience that you can dip in and out of, Risk Of Rain is for you. The combat is fun, fast and fearsome, everything you need from a 2D roguelike.

Risk of Rain (Reviewed on PlayStation 4)

Risk Of Rain finally gets the console release it deserves, a solid port with improved multiplayer capabilities only improves upon the fun had with the PC version. Must have for those looking for a great couch co-op experience.