Just a little over a year ago, Rivals of Aether joined Xbox’s Game Preview Program. In the time since, the creator, Dan Fornace, and his crew have introduced a plethora of changes and improvements that have effectively transformed the game. Every aspect of this game shows just how passionate the team behind it must be. One of the very first ways I saw (or rather heard) this passion was when I booted the game up and I heard that sweet, sweet retro fighting music from flashygoodness. I truly can’t express exactly how well these tunes make you want to brawl. I’m not sure if it’s the fast pace and full sound or the very old-school feel that it has, but it all just works so well.

That old-school feel completely dominates the title’s visuals everywhere you look. Whether it be the arenas, hit effects, backdrops, menus or character designs. I’d argue the characters are the most visually impressive part of the game since they all have unique designs, animations, and movements. Beyond their visual differences, each Rival has a wholly exclusive moveset that utilizes one of four elements. Since I’m trying desperately to refrain from talking about each character individually, I will just say that the eight characters (two have to be bought with ingame coins) are all interesting in their own way. No matter the player’s playstyle or skill level, there is a character for everyone that enjoys a good ol’ brawler. I said I wouldn’t talk about all the characters, but I would like to talk about one of the characters to help showcase just how much care has gone into each available Rival. 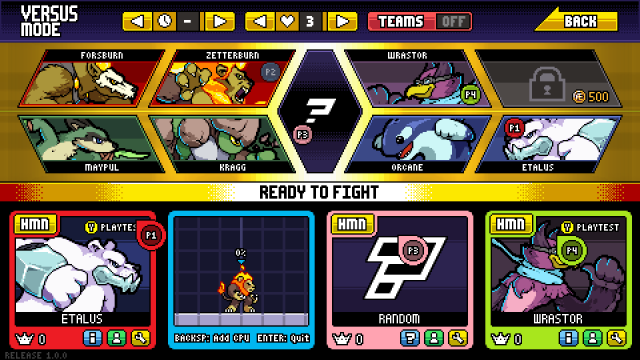 My favorite character has to be Forsburn, the Exiled Flame. This Rival uses his cloak, dagger, and control over smoke to deceive his opponents before launching them with a devastating blow. If the player wants to deceive their enemies, they can spew smoke, create a clone, or warp from point to point. All of these tactics can be turned into much more powerful attacks if used correctly. The clone can be used to confuse other Rivals or even explode, just to do damage. When warping, Forsburn can disappear from one point and appear somewhere else, sometimes multiple times if he warps into smoke. Finally, the smoke Forsburn can create not only obscures his location, but can be inhaled to allow him to explode for a decent amount of damage.

None of this even mentions that every character has neutral, dash, tilt and aerial attacks. Rivals even have three separate types of attack: normal, strong, and special. These all have unique animations and some Rivals even use them differently depending on what state they’re in. Add in the double jumping, dodging, wall jumping, recovery, and various other movement and defensive options and you’ll see just how deep the gameplay truly is. Knowing that deep gameplay alone won’t carry the game, the team behind Rivals of Aether were keen enough to include several game modes that all have a unique appeal. When the game first showed up on the Game Preview Program, it only had local and online versus, training and practice available. 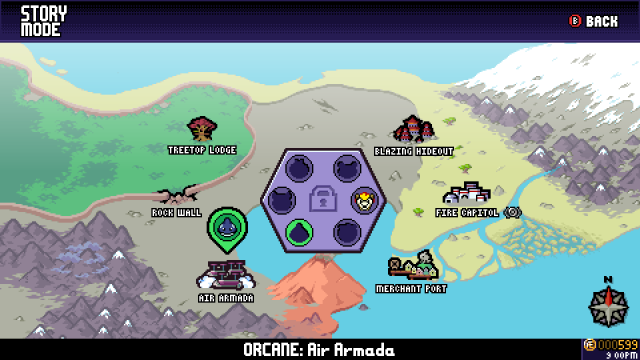 While the local versus gave the player access to team battles, controls over stocks and time and even bos to fight, the online variant only offered 1v1’s on certain versions of stages. This has drastically changed as with the full release. The game offers a story mode, abyss mode, practice, tutorial, local versus, and online versus which supports 2v2’s. The story mode offers six individual campaigns that are five stages long for the initial characters. Each campaign has story elements introduced between each fight and culminates in a sort of boss fight with a character that has two lives instead of one. The climax of the story mode sees the player take control of a chosen Rival with all the others as backup stocks in case of failure. This final part is different from every other part of the game and completely surprised me when I experienced it for the first time.

Upon completing the story mode, players will unlock abyss mode. In this mode, one to four players will take on the endless waves of enemies and trials that seek to stop the Rivals from going any further. After each wave, players will gain XP and eventually level up, unlocking more slots for special traits that change how their moves work. This gives the already interesting mode another reason to keep coming back to it since the max level is ten and I mean, it can’t take that long to get there, right? I only got the chance to play this mode single player but look forward to challenging the abyss with my friends later. Although, since they haven’t played as often as I have, I’ll probably have them try the tutorial and practice modes to ‘get on my level’. 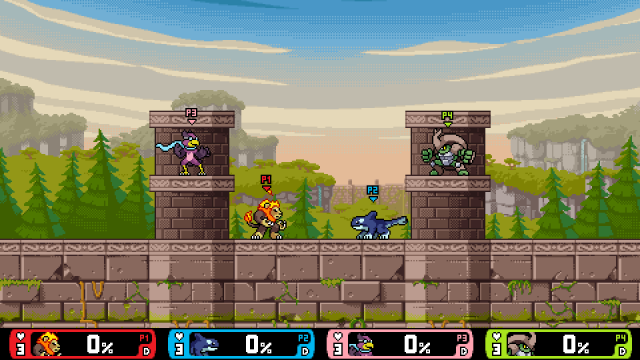 You see, the tutorial mode offers tons of information in playable stages that cover basic, intermediate, advanced, and even character specific tips and tricks. Once a player has tapped out the tutorial mode, they can always try out the practice mode that allows player to change everything from game speed to whether or not hitboxes are shown in order to give the player full control over their time spent there. Utilizing all of these tools will be necessary if you plan on trying out the game’s online ranked mode where the best of the best go to compete. If you’re not feeling particularly tryhard-y, you can always try out the online custom matches.

There’s also always the rather impressive local multiplayer that allows for team battles, CPU enemies of varying levels and any other personal restrictions or challenges you’d like to force on yourself. Personally, I enjoy trying to survive a 1v3 against level 9 bots that are chosen at random. I still haven’t beaten this challenge yet, but I always enjoy trying! A large part of what makes this so fun is that I allow myself to play on the ‘Aether’ version of stages, making use of the environmental hazards or interactable aspects of each stage. Giving players the option to use a basic and Aether version of every stage is great because it means that competitive and casual players alike can find a stage they’ll enjoy. 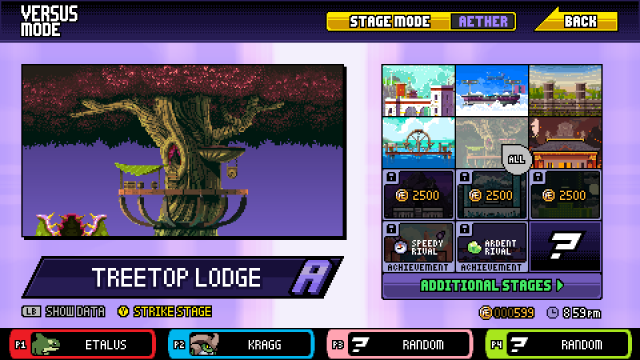 If it’s not obvious by now, I love this game. I can’t find a single thing that’s particularly wrong or bad about it. Rivals of Aether is filled with such love and it shows in every aspect of the game. No matter if it’s the number of options players have when deciding how and what to play or the fact that players of any skill level can enjoy this game with friends, it’s clear that Rivals of Aether has a fantastic team behind it. What’s more is there are plans to expand the game further now that it’s been released. Right after being released on Xbox, the Ori character and stage DLC released as well.

Yes, this is the same Ori from Ori and the Blind Forest and yes, the Rival version of the character has the same kind of care and polish that every other Rival has. Boasting a wholly unique moveset and fighting style with a brand new stage to fight on, this DLC is definitely for the fans of both games. With plans for a frog character named Ranno and talks of releasing future original Rivals in packs of two, I’d be lying if I said I wasn’t excited. Rivals of Aether has proven that a game doesn’t have to have realistic graphics or an overly complicated plot to be awesome. It truly seems that a project like this require passion, love, and dedication. This is a must-have for any fans of brawlers or just good old fashioned fun.

Rivals of Aether (Reviewed on Xbox One)

Boasting a varied lineup of unique fighters, beautiful retro art, interesting stages, and an impressive amount of content, Rivals of Aether hits every mark hit sets out to hit. This is must-have for any brawler fans with deep, engaging combat that's easy to learn and hard as nails to master.