Don’t move a muscle until you are ready to take on the evil robots aiming to wipe out humanity in RoboPhobik developed by Haruneko. Remember the robots don’t move until you move. So if you are strategic and plan your movements out, you can take them on with minimal damage to our main protagonist, Julie. This is not the kind of game where you run in guns blazing. If you do, the robots will take you out, and more embarrassingly it will probably be the rock ‘em sock ‘em style robot who continuously punches you, not the one with the cool long-range lasers. 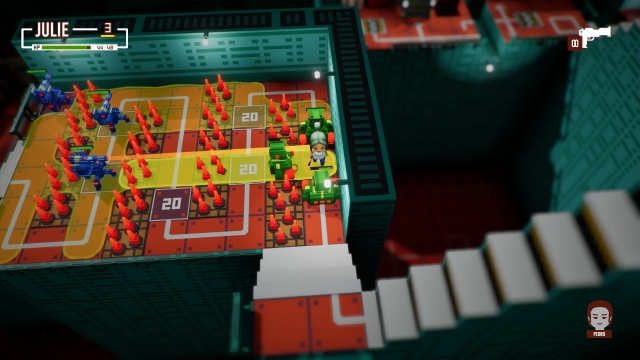 The game begins with Julie telling us her backstory and how she got to be there. Back when she was 19 in 1971, she was inexperienced and naive. She wasn’t a child anymore, she was an adult who wasn’t allowed to make any mistakes and she made a big one. What exactly that was she doesn’t say right away, but as you play you will learn more about her mysterious past and how she got into that situation. We find out from Nancy, Julie’s boss, that PAL 9000 (not HAL from 2001: A Space Odyssey), the most advanced robot, has gone out of control. He has taken over the city with the goal of eradicating all of humanity with his own army. Your mission is to destroy PAL before it is too late and he accomplishes his goal. 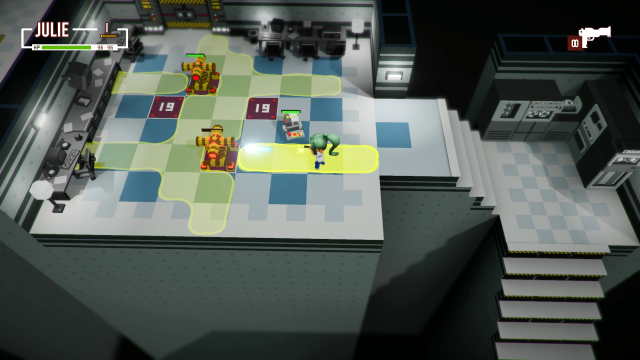 The laboratory has multiple floors that you will be traversing, all with a grid style layout. Nancy explains how the trap panels, known as SEED work. Each SEED will spawn new robot enemies that will try to take you out. They aren’t activated until you get within three panels away from them, but if you destroy the enemy that came out from it, the SEED will be disabled for a few seconds before another one is spawned. It is easy to see exactly how much time you have since each SEED will have a countdown on top of it. You aren’t the only thing who can trigger a trap, if the SEEDS are positioned close to each other, they can set the other one off once an enemy is spawned. So no matter how sneaky you are another robot might throw a wrench into your plans. The robots have been capturing the scientists that work on the numerous floors of the laboratory. They have not killed them yet, they seem to respect their creators, and possibly are keeping them around in case any of the robots need repairs or upgrades. So as Julie makes her way through the floors she has to rescue as many scientists as possible. This will end up being beneficial to you. There are two different kinds of scientists, weaponsmiths who are dressed in red and armoursmiths dressed in blue. The more weaponsmiths you manage to save the stronger your base weapon will be and more types of weapons will become available to you. Rescuing armoursmiths will allow you to obtain better armour for your character. 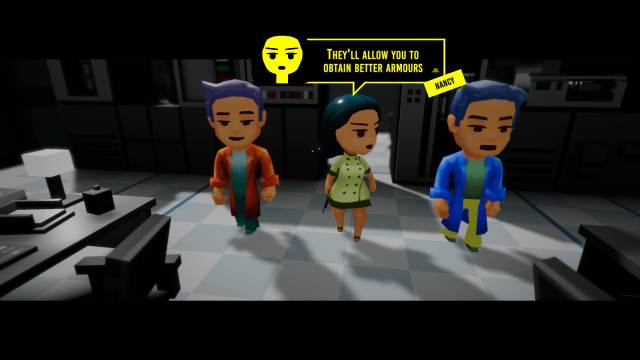 There are many kinds of robots residing in this laboratory. Some are like turrets who can shoot in four different directions, they are stationary and do not move. Scoutbots who are just around and do not hurt you, but make for easy XP if you destroy them. Robots that will shoot lasers or fire, they move around the stage and can come after you. Then there’s super evil punching robots, they don’t seem that tough, but they will follow you around the level and continuously punch you. I’ve been destroyed by more of these robots than any others. There are spikes to avoid along with the other enemies, it’s tricky because the spikes don’t stop or slow the robots down so they will come straight for you. Once Julie gets hurt in the level, the music starts getting distorted. The more hurt the more creepy and weird it gets. Luckily there are items that can pop out of some of the SEED squares to help replenish your HP, give you items, or switches to open the closed off sections of the level and the elevator doors. Once the elevator door is open you can leave and move onto the next level on that floor. Each floor has six different levels within it, and once you complete one you can choose to go onto the next one or rechallenge one of the other floors you have previously done to look for things you may have missed the first time around. If you die in the level, the game is nice enough to let you keep all the XP you earned from defeating robots so you can level up. Not losing all your progress is really appreciated! 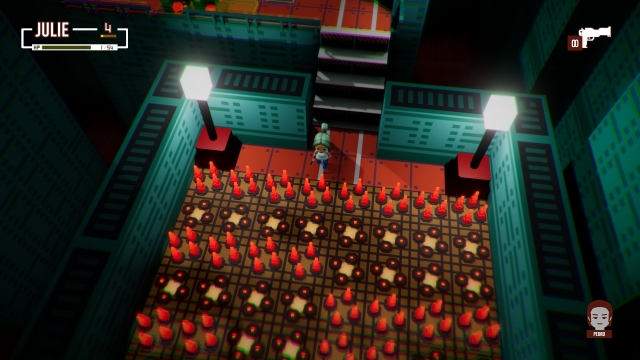 RoboPhobik is really an interesting puzzle game that seems deceivingly easy at first but definitely gets harder as you go. It keeps you thinking, I was always trying to plan out the most effective way to take out all the enemies and get to that elevator. The graphics aren’t really anything to write home about, but the gameplay is a lot of fun and that matters more to me. If you are in the mood for a unique puzzle game that will punish you for just running in and shooting anything that moves, this is a game to check out.

RoboPhobik is a unique puzzle game where the enemy only moves if you do that makes you be strategic and think out everything you are doing. If you want to run in and destroy everything this may not be the game for you.