Seeing the screenshots and video, you could be forgiven for thinking that Roche Fusion is a bullet hell game. Yet bullets are but one of the things you have to worry about as you fly up the screen through space, as I've been encountering more ships trying to smash into me than the weapons fire illuminating the screen.

There is one game mode in Roche Fusion, but it can be done with a single or with two players working cooperatively. There are two leaderboards, one for global and one for friends: I'm proud to say I'm the highest scorer out of all of my friends! 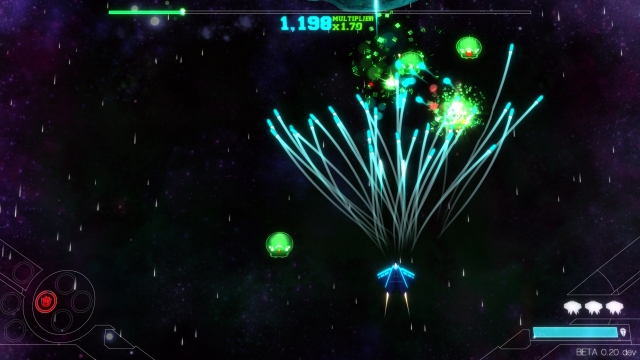 There is no story to speak of, so it is just a case of scoring as many points as you can with three lives. After each wave of enemies you are given the choice between three random upgrades, such as a more powerful main weapon or a drone to help you out. There are a ton of upgrade options, all of which carry on to your next life but not after a game over and all of which add to the strategy of the game.

Speaking of strategy, I felt that I really had to think about how to attack each enemy rather than just mindlessly shoot around the screen. They appear above or from the side, swooping, scrolling or hanging around, with lasers or explosions so there is rarely anywhere you feel safe, but I never thought the game was being unfair. Each craft you unlock, there are ten in total, needs a different strategy to fly. Do you need to be more mobile because your weapon is slower, or do your shields need less time to recharge? There are leaderboards for each ship, giving plenty of replay value for those who like to chase high scores and achievements. 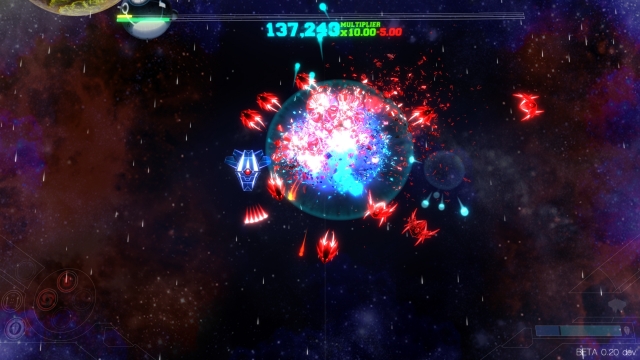 The graphics and music are icing on the SHMUP (shoot-’em up), with a HUD that moves as you do adding a nice element of motion to it. The enemy craft are all distinct and well designed, with some designed to look like spiders, fish or scorpions, while others look like spacecraft. The music isn't varied, but it doesn't get boring or repetitive and suits the action and the lulls when choosing an upgrade.

There are plenty of achievements and paired with the leaderboards it does have lots of replay value. It’s good looking and fun enough to make you want to do so, which is an added bonus. The price isn’t bad, so fans of the genre should definitely take a look. 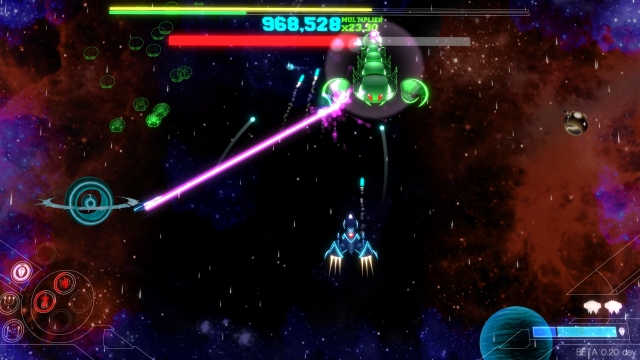 Plenty of achievements and leaderboards give lots of replay value, and it's good looking and fun enough to make you want to do so.