Sometimes, all you want to do as a gamer is play a mindless and enjoyable hack 'n slash to vent some anger, kick back without too much care or attention to beating high-scores, with the sole purpose of destroying as many bad guys in as little time as you can.

Sacred 3 (the third in the Sacred series, y'know) is one of those games. However, it tries its very best to put you off - again, and again, and again. It's not the combat, variety, or even the music, but the storyline and narration, that really grinds my gears. 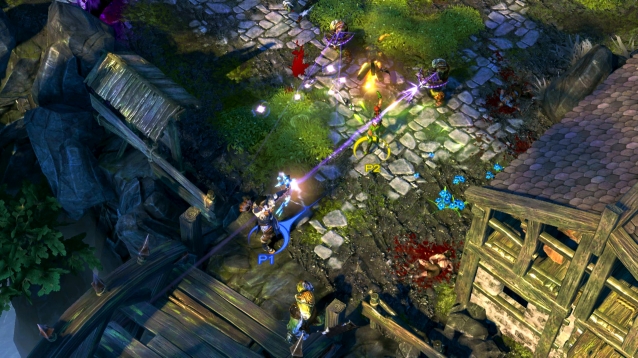 You play as one of several character classes, chosen at the beginning of your adventure. Your goal is to save Ancaria, the world you're in - I won't bore you with the details. It's a standard storyline with your classic Paladin, Warrior etc. classes so nothing special there, but the way the story is told and how every single character gets under your skin is what tears this from being a really healthy hack 'n slash, to something it’s trying and failing to be.

In the majority of games you normally have a general environment which is more or less constant throughout. This is matched with appropriate scenery, weapons, clothing or armour and of course dialogue. Sacred 3 switches between Middle-earth, noble language to absolute crazy and frankly childish speak in a matter of seconds. During my experience of Sacred 3, I've experienced sincere horror and fright at a situation to "well if I wasn't such a noob..." within the same breath. Distasteful is a mild way of putting it. Sure, I get that humour can be a massive plus in many games but the manner in which these jokes are shoehorned in do not make for a pleasant experience. 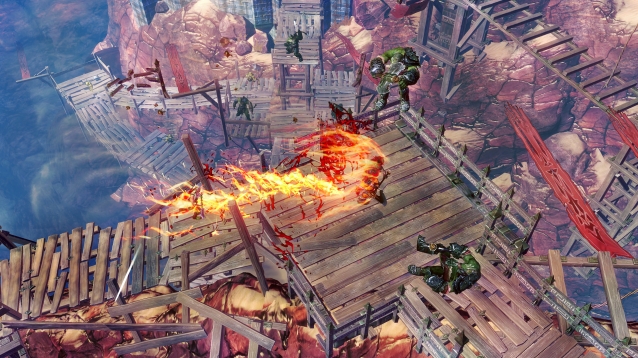 On top of this your guide Aria (who has psychic powers), talks to you in the most obnoxious of ways throughout your journey. Many objectives within your missions require you to do more than one thing at the same time; for instance, fighting off bad guys at the same time as opening a gate by hitting a wheel six times. After finding out your task and having it printed on the screen for you to see, Aria still feels the need to be a sarcastic bitch when you haven't hit the wheel fast enough. You can be tearing through dozens of enemies to save yourself and hear a "Err, hello? Turn the wheel!" to add to the stress. This would be a somewhat useful prompt in the first instance if you were not performing the task, but repeated over and over in such a manner is painfully annoying.

The real shame is how much these things overshadow the quality of the combat and progression. Special moves which are bespoke to specific classes aid you in your journey, giving you a greater power in more overwhelming situations, but the majority of attacks are performed using the same button. It does get a little boring after a while, with the majority of enemies being very easy to exterminate but the game is a hack ‘n slash and you do just that; so not too much wrong there. Story missions are broken up by wave-style missions. These give you the chance to grab some more coins from killing enemies and try out new moves and skills that can be acquired in the store. On top of this, spirits can be equipped to your warrior that add certain advantages, bonuses and perks to your gameplay. They also add pointless one liners to your missions.

Yes, that’s right, even more madness. I wasn’t aware of these spirits during my first level of playing but all I could hear was someone saying “Sexyyy” over and over again after connecting together moves for a combo. Then, mid-conversation with Aria and myself, a dialogue box would pop up with a crass, sexual pun to what was just said. Again, off-putting, unneeded and just plain stupid.

Honestly, this game would be a whole lot better if there was zero dialogue whatsoever and is hard to give such a negative review when just one thing makes the whole thing so horrible. Audio aside, it’s a pretty standard hack ‘n slash. The combat is fun, intuitive and enjoyable for same-screen multiplayer but as mentioned before does get a little boring after a while, especially when playing single-player and especially with the unremarkable monotonous attempts at jokes throughout the game from almost every character. If you enjoy hack ‘n slash titles and are able to drown out dialogue with some loud upbeat music then Sacred 3 will fill your boots nicely - otherwise, you’ll end up facepalming so hard you may inhale your open palm.

If you enjoy hack ‘n slash titles and are able to drown out dialogue with some loud upbeat music then Sacred 3 will fill your boots nicely - otherwise, you’ll end up facepalming so hard you may inhale your open palm.