Sacred Citadel is a spin-off of the mildly successful Sacred series, acting as a prequel to the upcoming Sacred 3. The action RPG gameplay of the main series is replaced here with a simpler, side-scrolling hack and slash style. I’m personally unfamiliar with the series in general, so I’ll be judging this game solely on its own merits. 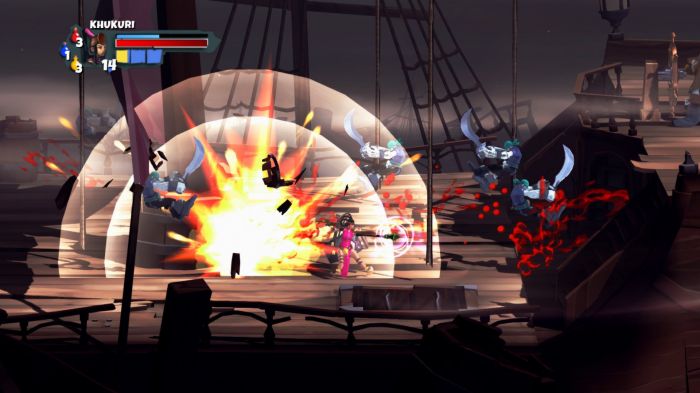 The game is divided into four Acts, each consisting of five levels of around 10-15 minutes, making it something of an ideal pick-up-and-play game. You’re given four classes to choose from: Warrior, Ranger, Mage or Shaman. The differences between them are minimal at best; the Shaman has the ability to buff herself, for example, but in all cases you’re given a light attack, a heavy attack and a ranged attack. The combat itself is fairly rudimentary, mostly requiring the player to fight wave after wave of enemies before moving onto the next area. The ability to block and dodge-roll does add some element of skill to proceedings but it’s entirely possible to pass many of the stages by simply hacking away with very little finesse.

There’s also an ever-increasing list of combos available as you progress but the game falls into the same trap as Devil May Cry, Bayonetta and many other combo-based games, in that it’s often easier to rely on one or two very effective attacks than it is to put any effort into memorising new ones. You will pick up incrementally better weapons as the game progresses, and you are also given the option to purchase items from a town in between levels. There are a variety of special attacks that charge as you engage in combat, with increasingly powerful attacks available depending on whether the player has one, two or three blocks charged. They do become somewhat overpowered; the fully charged attacks can almost one-shot many of the bosses in the later stages of the game, removing much of their challenge entirely. 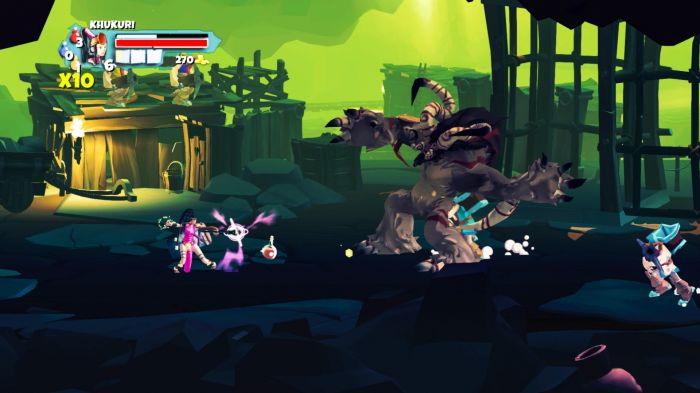 The boss fights are the low point of the game in general, consisting mostly of larger versions of regular enemies, with only one or two offering any kind of unique challenge. The inclusion of minor enemies within boss encounters is almost universally irritating, and it’s at its worst in Sacred Citadel. The inconsistent difficulty of the boss fights is also a problem; most of them are trivially simple, but the last few are exercises in anger and frustration, requiring Dark Souls-like levels of skill and precision to beat.

This is also an issue with the rest of the game, with a violently difficult fourth Act following the relatively simple first three, during which the game seemingly seeks to test only the player’s patience. Many games work well without modal difficulty, but it certainly would have been appropriate here. The game is very short in general, taking around 4-5 hours to complete on my first playthrough. Without the option to choose a higher difficulty, the only incentive to replay the game is the challenge of beating your previous high scores, which should hold great appeal to fans of old school arcade games.

There’s also up to three player co-op on offer, which I tried out with a friend. Sacred Citadel is noticeably more enjoyable when played with others, mostly because conversation and co-operation removes much of the tedium to be found in the repetitive combat, and the mindless nature of the game lends itself well to a more social situation. The game also does a good job of compensating for extra players in terms of difficulty, with enemies taking notably longer to defeat as a team. One minor issue with co-op play is the fact that it can be very difficult to keep track of what’s happening on screen; it’s a very visually busy game to begin with, and this problem is significantly magnified during co-op mode. 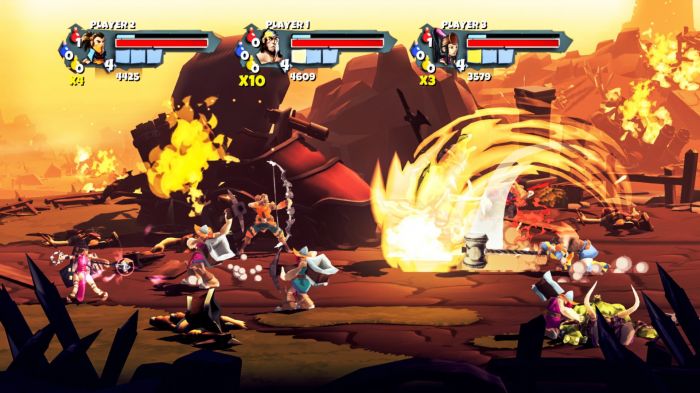 Sacred Citadel is a very visually appealing game, with fantastic graphics complementing a unique and colourful art style. The soundtrack is a slightly more mediocre affair; there are some nice sparse ambient pieces, but the more up-tempo synth tracks feel as if they would suit a traditional turn-based JRPG more than a medieval style brawler, and as such feel a little out of place. On the other hand, there’s very little to complain about in technical terms; the game runs smoothly with very short loading times and no noticeable drops in frame-rate, with the ability to instantly respawn after death taking much of the frustration out of the few truly difficult encounters.

Overall, Sacred Citadel is a mildly enjoyable but wholly unessential game. Fans of the series and those looking for a mindless brawler to play with friends will most likely get some enjoyment out of it, but anyone seeking a refined or original experience that offers anything beyond the bare minimum of functional combat should look elsewhere.

Sacred Citadel is a spin-off of the mildly successful Sacred series, acting as a prequel to the upcoming Sacred 3. The action RPG gameplay of the main series is replaced here with a simpler, side-scrolling hack and slash style. I’m personally unfamiliar with the series in general, so I’ll be judging this game solely on its own merits.