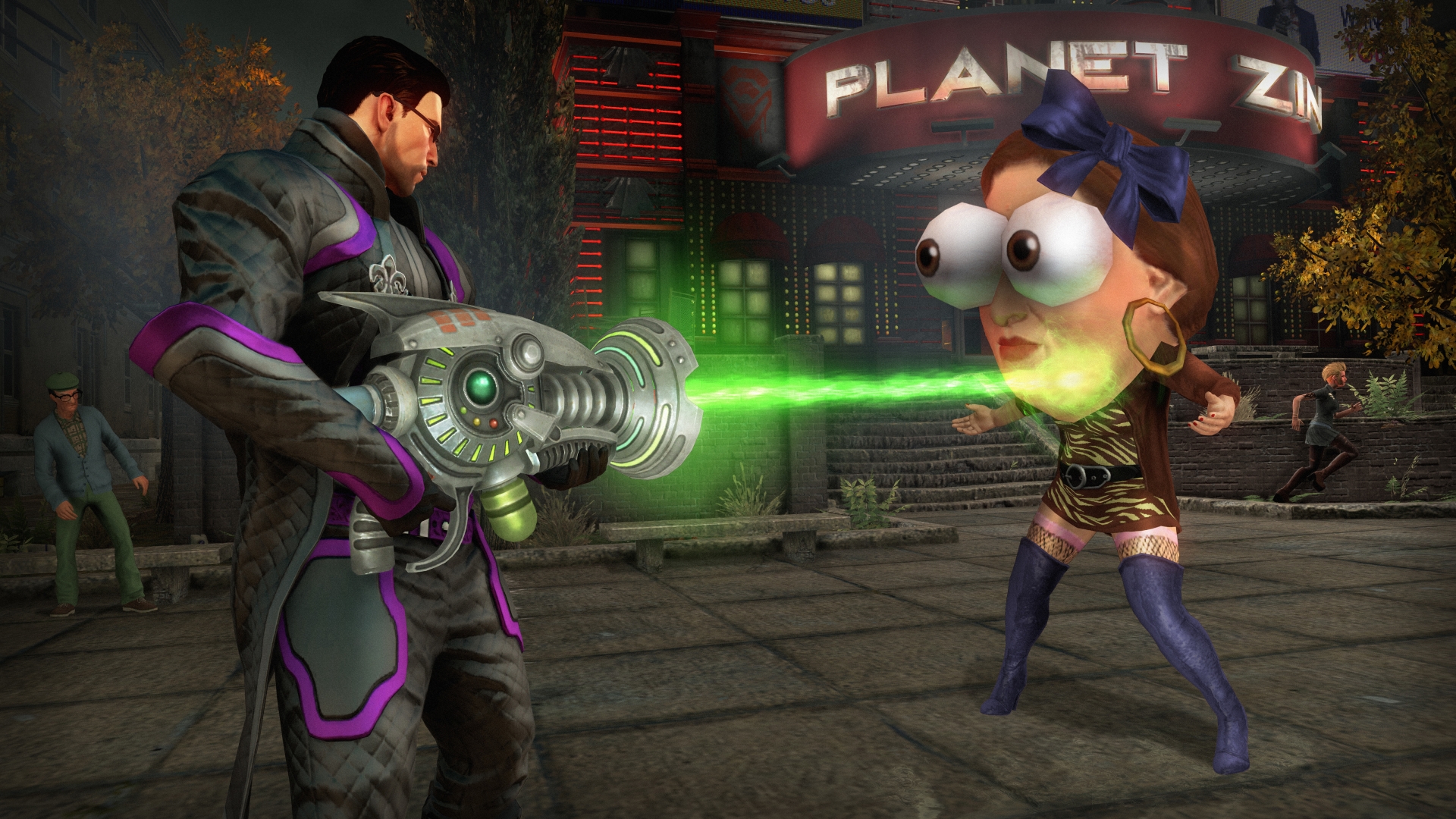 “Go forth, unleash Hell”. These are the words that your trusty companion Kinzie bestows upon you within the opening segment of Volition’s Saints Row IV. And while you’ll certainly be unleashing an ungodly amount of Hell during your time with the game, I can’t help but feel as though this was also the motto for each and every developer during the creation of this game. It’s just totally bonkers, but also brilliantly diverse and while it acts as a sort of call back to the passing eras of gaming, it manages to stay refreshing and unique throughout.

Through all the build up centred around the words ‘crazy’ and ‘dubstep gun’, it’s easy to lose sight of what Saints Row IV actually is. Like the previous titles, SRIV allows you to take your own customised character, titled The Boss, through an open world environment filled to the brim with story missions, side missions and various other quests. That’s the base concept, and this is still very much a poor mans GTA at its core. That title, however, doesn’t do this game justice; on top of that basic framework, SRIV is so much more. What really stands out this time round is the inclusion of aliens and a Matrix-esque simulation jumping storyline that places your character in a world with seemingly unlimited possibilities.

After being chosen as the President of the USA, and with his fellow Saints parting ways, The Boss is abducted by a suspiciously well mannered Alien overlord named Zinyak who traps him in a simulated version of Steelport, the city from Saints Row: The Third. The majority of the game sees The Boss attempt to re-unite the 3rd Street Saints who have all been locked within their own simulated worlds, which apparently are all based upon their darkest fears. So while you’ll spend the majority of your time in the familiar, but more alien infused, Steelport simulation, you’ll also get the chance to try out some very different worlds. I’ll get to those later, for now let’s focus on Steelport and what you can do within the big city. Outside of the core missions, there’s a lot of choice. Customisation has always been a key part of Saints Row and this installment only furthers the ridiculous array of options available to the player. A majority of the in-game vehicles can be customised with new body work, paint and other little details; these can then be saved to your mobile phone (sound familiar?) and spawned at any point later on. The weaponry on offer is also adaptable, making even the most mundane machine gun a cool way to spray lead. In fact, each gun has an array of skins that completely change the image of the weapon, from a gangster tommy gun to a water gun style rifle. Add on top of this a huge number of mad clothing options, as well as tattoos and of course the entire physical appearance of your Boss, and you’ve got a game that’s simply built for weird and wacky creations.

I wasted a lot of time fiddling around with the creation options, but it sure was fun and is even more fun with a friend. Thankfully, once you’ve found the right fedora and jazzed up the local garbage truck, there’s still a lot to keep you occupied in Steelport. The much-touted superpowers, a totally new feature of the Saints Row series, definitely mix up the standard run-and-gun action and also make it super fun to make your way through the city. The two basic powers, super speed and super jump, will probably be your most used and useful powers as they essentially make vehicles irrelevant and are great to use in standard play. You may think that not driving around is a loss, but remember that this isn’t GTA, so some of the depth and variety of, say, Liberty City, isn’t really found in Steelport. Plus, you can still listen to the radio outside of a car; it’s all a simulation, remember? 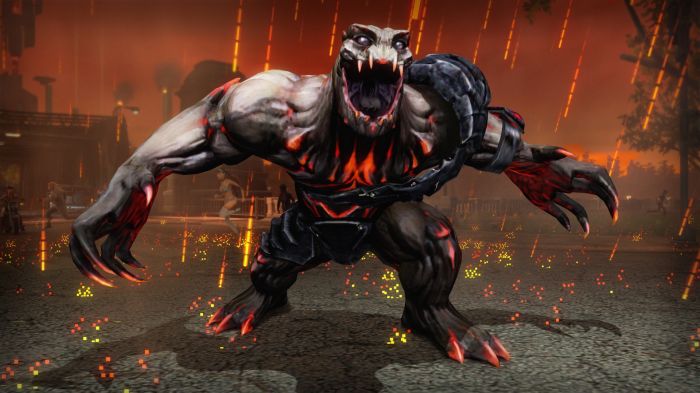 The rest of the superpowers will be familiar to anyone who’s played Destroy All Humans! or Infamous. Standard blast attacks with fire or ice are mixed up with telekinesis and more unique abilities like setting fire to someone by walking next to them. Although they’re all pretty powerful, they mostly start off with a poor recharge speed so are more annoying than useful. Only by unlocking power ups can you improve your abilities and this can only be done by collecting shards around the map; a rather boring process that prevents you from really playing around with your powers. Thankfully the shooting mechanics are up to par, and while they’re nothing new or inspirational, they do make gunplay a decent alternative to superpowered killing.

With all these mechanics in place, SRIV opens up the doors to a long, but never dull, main mission strand that is consistently engaging and fun. The main missions will have you crossing between different simulations on the hunt for your missing Saints. It’s a positive stroke of genius from volition to incorporate this concept into SRIV as its spoof style blends perfectly with the world hopping story. Through the missions you’ll play a hilarious text adventure game, a trippy tron-like biking section, a fight with a giant can of soda as well as an amusing call back to 80s side scrolling action games. There are a few other pleasing and surprising levels but I won’t spoil them. Overall the SRIV main campaign is a brilliant exemplar of both retro and modern gaming mechanics and while it does take a lot of elements from other games, it manages to find a life of its own through humour and a tendency to provide the unexpected.

In fact, the humour in SRIV is one of its best features. Beyond the crude and obvious humour found in Duke Nukem, and even beyond the subtle and charming humour of Uncharted, SRIV provides some genuinely laugh out loud moments, particularly those that take the piss out of the gaming industry as a whole. An amazing duo featuring a fake Hulk Hogan who commentates on your games of Prof. Genki’s Mind over Murder, are particular highlights. So too are the back and forths between The Boss and Zinyak, the brilliantly voiced Alien overlord. The outright stupidity of the game is shamelessly mocked by the cast and the ridiculous gaming principals we’ve come to accept are called into question. It all makes for an experience that I would call the funniest I’ve ever played in a game, and as before, it’s even more enjoyable to laugh along with a friend. While Saints Row IV is certainly its own game, and is unique in so many ways, it does use an outrageous number of mechanics and elements simply ripped from other games. Obvious examples include the superpowers of Infamous or the tower climbing of Assassin’s Creed. There are also some more subtle inclusions such as a side mission titled ‘Fraud’ in which you have to injure The Boss as much as possible. Like the other inclusions, this is great fun, but it sure does remind of the classic PSN game PAIN. There are numerous other examples, far too many to list in this review, and while I understand that Volition were trying to parody many games, there’s a point where parody becomes blatant copying. The game uses most of the elements well, I can’t deny that, but it would have been nice to see a few original mechanical ideas within the game.

While I’m on the subject of issues, I have to mention SRIV’s one major problem; on console the game just looks poor. Admittedly, we’re basically at the end of this console generation now, so you can expect a PC version to be far more graphically superior, but the PS3 version I tested looked horrendously outdated. Textures are extremely drab and pixelated, character models look mediocre, and there’s a general lack of flare in the special effects department. There’s also a noticeable drop in latency and framerate during heated moments and this all unfortunately detracts from the gameplay experience. In fact, my very first opinion of SRIV was that the graphics looked awful, thankfully, you kind of adjust and get used to it. But for a AAA game it’s a shoddy performance and really the game’s only major drawback. 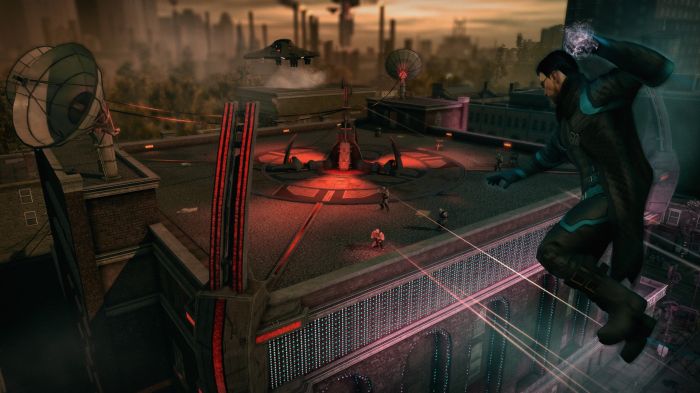 So yes, that aside, there’s a lot to like about Saints Row IV. The other elements of the game are still great fun. Side missions are available in a huge quantity and while many constitute performing the same tasks over and over, these tasks are usually pretty fun. What’s more, there are a selection of ‘loyalty’ missions, one for each of the Saints, which are basically full missions but based within Steelport. They’re great for a bit of added variety and perhaps best display the game’s fun mechanics. There’s also a good soundtrack to enjoy on the various radio stations; perhaps my favourite moment with the game was during a side mission in which you create havoc in a UFO. Only, instead of a roaring crescendo of rock music I was listening to the opening chapter to Pride and Prejudice. This is just one example of the thoughtful and often hilarious audio design. Voice acting is also very good on the most part, especially if you pick the british voice for The Boss.

In all honesty, I never expected to like Saints Row IV. I’d pegged it as a step too far, a little too crazy for its own good. In reality, the game is indeed unashamedly daft, but it’s also clear that Volition have gone to great lengths to make it a game that laughs in the face of normality and does everything it can to make it a fun experience for the player. It has flaws, no doubt; the poor graphics are complemented by sadly unoriginal gameplay and an uninspired setting. What it lacks, however, Saints Row IV certainly makes up for in pure fun factor. I’ve never laughed so much with a game before, and I don’t think I’ve ever been so shocked by one either. There’s just so much lunacy in one space, it’s hard not to fall for the Saints Row charm.

In all honesty, I never expected to like Saints Row IV. I’d pegged it as a step too far, a little too crazy for its own good. In reality, the game is indeed unashamedly daft, but it’s also clear that Volition have gone to great lengths to make it a game that laughs in the face of normality and does everything it can to make it a fun experience for the player. It has flaws, no doubt; the poor graphics are complemented by sadly unoriginal gameplay and an uninspired setting. What it lacks, however, Saints Row IV certainly makes up for in pure fun factor. I’ve never laughed so much with a game before, and I don’t think I’ve ever been so shocked by one either. There’s just so much lunacy in one space, it’s hard not to fall for the Saints Row charm.

Quite looking forward to getting this at some point :)

Meh ill get it 75% off at Christmas in the Steam sales.