Before I even get anywhere near digging into this review, I have to doff my cap to the mad scientists behind this new twin-stick-shooter, Scintillatron 4096, for making me feel like a kid again. From the moment the opening titles hit, I was gone. Whisked away on a cloud of nostalgia to a far gentler, more innocent time, where I would spend days typing lines of code into my Vic20 in great anticipation of the game that would be born at the end. Days where I would play Asteroids on a top-down table thing in the local arcade, and go hungry because my dinner money had been eaten by Pole Position. The feel, the sounds and the visuals of Scintillatron 4096 are a turbo-charged DeLorean time machine masquerading as a video game. And I am smiling broadly because of it!

But, let’s double back quickly. Hitting me right in the nostalgia gene is all well and good, but, is there a game lurking below that warrants a place all the way up here in the future that is 2019?

And the simple answer is yes…after initially seeming doomed to fail.

Scintillatron 4096 is the sort of game that during the first encounter (after the hazy memories had subsided) left me cold. On the surface, I was seeing a game that seemed to inhabit a middle ground between oldé timey Asteroids, and more modern twin-stick-shooter, Geometry Wars. 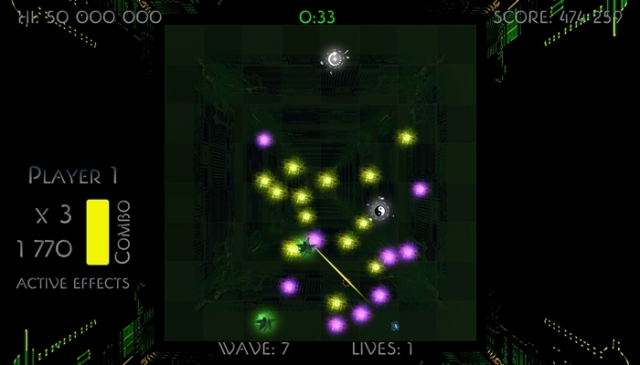 It has the move around screen blasting enemies thing going on, and it has the retro-infused looks in abundance, yet it also felt quite clunky. For example, rather than having a full 360 range of firing to hand, Scintillatron offers more of a compass point way of shooting, so, you can shoot north or east, or even northeast, but you cannot fire in a north-northeast direction.

This left me battling frustration at what I deemed poor controls during my first couple of plays. Thankfully, however, as the plays rolled by a realisation dawned, with this game, there is considerably more depth under the hood than first appears.

Sure, Scintillatron 4096 is a classic twin-stick-shooter, move the left stick to control your ship, and the right to fire in whichever direction you push it. The goal being to clear the screen of baddies before moving on to the next stage. There are powerups to collect along the way, and a timer counts down atop the screen that if it hits zero unleashes the deadly, ‘Hurry Up’ enemy. Simple, largely expected stuff. But as the plays mount something else becomes apparent. This is a game that has some serious hidden strategic elements built from its scoring system.

In Scintillatron 4096 the big points are hidden behind clearing the screen in a specific order. For example, in the opening level, we are faced with a straightforward task of wiping out blue and yellow enemies, and it is easy to go in all guns blazing with no regard for what gets hit, see the Ghostbusters first outing with the proton packs for reference. Yet when the score screen pops up post level we see our actual combo number achieved, alongside the potential combos available, and this is where the beauty and utter addictive pull of this game lives. If I had, say, wiped out the blue baddies first then hit the yellow enemies, I would have hit the max combos possible, heard a disembodied electronic voice say, ‘mad skillz’ and been bestowed with so many points I would be pulling them out of various crevices for the next week! For myself, this is where the draw of the game lies. It is classic old school high score chasing. There are local and online scoreboards allowing me to see how much better the rest of the Scintillatron playing world are in comparison to my own skills, but it doesn’t matter, because after every death this game whispers gently in my ear, ‘just one more go’, or, ‘you’ll get it next time’. And I give in to its promise of future glory every…single…time.

Alongside the wondrous pull of nostalgia and addictive gameplay, Scintillatron 4096 also boasts some truly unnerving metallic vocals that pop up now and then and sit somewhere between a creepy serial killer and C3PO with his golden balls caught in a vice. It’s unsettling but, weirdly, adds to the charm of the game.

There is classic single-player mode to attack, which is where I did spend most of my time, and still do to be honest. We also get some local multiplayer options, one is co-op and the other is battle mode, but this is possibly where the game will prove a slight let-down for some players. It is very light on modes and ways to play, particularly for example when placed side by side with others in this genre. Presently I am still entranced by the game, however, will this be the case in a few more weeks when the limited modes begin to take a toll? It’s difficult to say how Scintillatron 4096 will hold up down the line, but I do feel confident enough to expect that in short bursts of play, the game will still be fired up from time to time.

The difficulty of the challenge offers a nice gradual shift through the gears, meaning players can become familiar with the various baddies floating around and the best ways to dispatch them before being overwhelmed by the task ahead. 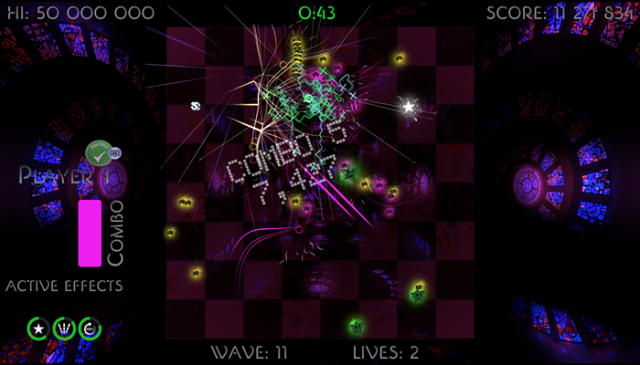 Visually the game is very basic with echoes from a far simpler time resonating throughout, but again this adds to the charm. There I go again mentioning the charm of this retro-infused game, and this leads me to another couple of questions. To truly get the most from Scintillatron 4096 do you have to be of a certain age? Do you have to have been there in the infancy of videogames to get the best of this game? I would hope not, the nice levels of strategic play and gradual incline in difficulty are worth the entrance fee to play, the added nostalgia is just something that reminds me how old I am now, so if anything, be bloody grateful not to have it…yet!

All in all, Scintillatron 4096 is a very enjoyable slice of twin-stick-shooting decked out in its retro finest and adorned with unexpected layers of strategy and addictiveness. After one play I expected to hate it, after five I was hooked, so much so that I feel then need to wrap up this review right now because there is a very odd robotic voice calling to me from the other side of the room, ‘you’ll get it next time’, it says.

Scintillatron 4096 offers so much more than its dated retro stylings initially suggest. What begins as a somewhat clunky, simple twin-stick shooter, quickly blossoms into a strategic, thoughtful and immensely addictive little gem of a videogame.

Nice review, look forward to this.