When I agreed to review Scrolls, I was assured it was in no way a card game. The screenshots may show cards, but that's not the point of the game, apparently. It would be more accurate to call it a scroll game, because all of the cards are scrolls (hence the title), but given that you buy and sell scrolls, build a deck of scrolls and require scrolls to do almost anything - it's a card game. Who builds a "deck" of scrolls?

With that out of the way, I'll get into the game itself. As you go through the tutorial you're introduced to all of the different aspects of the game. On either side of the board there are five idols, three of which must be destroyed to win the match. You sacrifice scrolls to get mana points that are required to summon creatures - so in almost every single-player match and in every multiplayer match, this is something you must do otherwise you can't do anything. Once you have enough mana: you can summon creatures to the board which attack after different numbers of turns; summon items that block your enemies troops or alter stats; or cast spells. Sacrificing can be done once per turn, but if you time it correctly you can get that extra point needed to summon something to help you out of a spot.

When you summon a creature or object, you need to select where on your side of the board to place it. Creatures can move to an adjacent block once per turn, but structures cannot, meaning you need to think strategically. Though, as long as you can survive to gather enough mana and creature cards, you can then spam the board until it's full of cannon fodder. 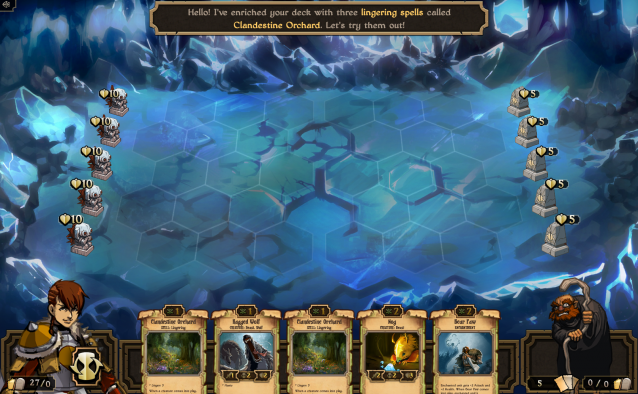 Some creatures have abilities such as automatic haste to attack on their first turn, or summoning a wolf every four turns. These don’t cost extra mana, so can be useful if used correctly. Spells can be used whenever you have the mana and affect either: a single unit; an area, all of your units, every unit on the board. The amount of mana each one uses is usually small compared to the cost of creatures, and do many things such as status effects or damage. Do bear in mind which units spells target - I wiped out three of my creatures, a blockade and damaged the only other unit I had left thanks to not paying attention. It’s quite embarrassing when in a multiplayer match...

There are a few single player modes and a few multiplayer modes. There’s eleven tutorials, which don’t really hold your hand after the third or fourth one, followed by a skirmish mode which lets you take on AI opponents at hard, medium or easy. The third single player mode is Trials, which is as close to a story mode as you’re going to get. It sets you against increasingly difficult AI opponents with some sort of special rules or conditions. It really expands your mind on how to approach the multiplayer opponents - these were the most fun for me. Skirmishes have never thrilled me in other games, so having specific things put in place to challenge me was a lot of fun, if for a limited amount of levels.

There’s quick match, ranked match and a mode called Judgement for multiplayer. The first two are pretty self explanatory - one gets you into a match quickly, the other is for a place on the top rated players ladder. Judgement has you pay 800 coins (gained from winning matches) or 120 shards (premium currency), to risk 30 of your cards in five consecutive matches. Lose two matches and you lose, but each one you win gains you an exponentially larger prize including coins and even rare cards. 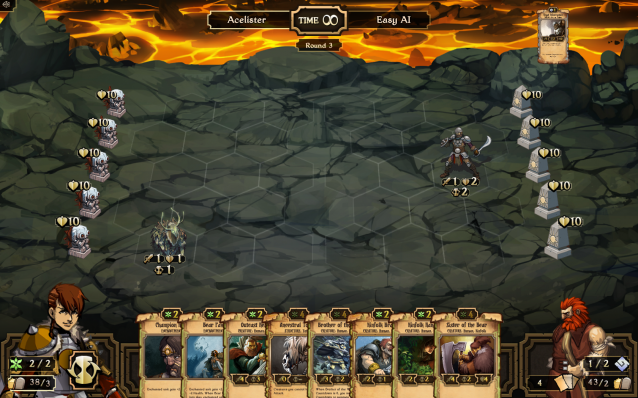 Matchmaking is quick and painless, though twice after coming out of a tutorial match, the game told me the connection had been lost and it was trying to reconnect. After ten minutes, both times, I had to quit the game and restart. However, that was my only issue while playing.

Outside of matches, you have Deck Builder, Crafting and Store. Deck Builder lets you sort your cards, to make yourself a better deck than the starting one (once you get some more cards). Crafting allows you to combine three cards to create a Tier Two card, and three of those into a Tier Three card, which are just like the normal cards but with a border and gives you more gold. The Store allows you to buy new cards, decks or idols - there’s even a Black Market where you can sell your own unwanted cards for coins, or buy cards from other players. I found all three easy to understand and use, much more than in Hex: Shards of Fate.

The graphics are very nice and well designed, especially the creatures you summon to the field. Even while getting completely owned by another player, I couldn’t help but admire his creatures. The art on the cards, and even the selection of avatar parts is nicely drawn. 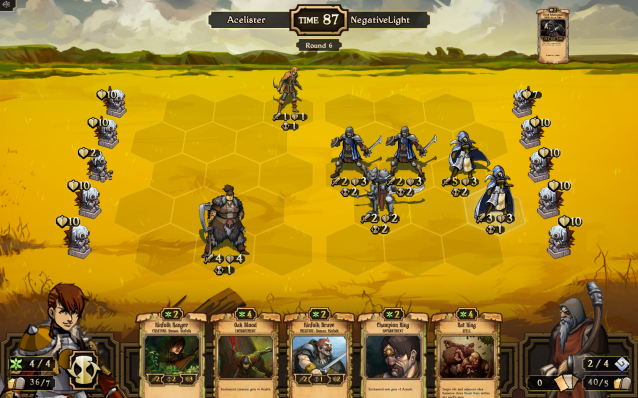 With nice looks and lots of replayability (got to get to the top of the leaderboard and build the best deck!) there is a lot to like about Scrolls. The pace of multiplayer is a little slow, with 90 seconds to make your choices of movement, summoning and sacrificing, as well as needing to destroy three idols. However, if you’re bored and not watching your opponent’s choices, then you’re going to miss something.

With nice looks and lots of replayability, there is a lot to like about Scrolls.