Sector 7-4-9er is an odd title, hidden away in the depths of the Xbox Live Indie section, the space mining sim has a solid core idea but seems to fall short in a number of other areas. To begin with you’re placed in the role of a person down on their luck, who owes quite a large sum of money to the space mafia. You take the remaining funds you have available and purchase a spaceship fitted for mining and set off to the recently discovered asteroids within Sector 7-4-9er.

The title will offer you two control methods, one being easy, which enables you to control a circular UFO style ship that lets you have more control over the movement of the vessel. The alternative being a harder thruster based movement system and visually you control a different style ship. You have to aim in a direction and fire your thrusters taking into account the momentum you’ve already gathered from travelling in a different direction. So going for the normal mode, be prepared for a number of bumps before getting the hang of things.

From here, you have to shoot out the sections of the asteroid in the hunt for precious minerals in order to build up your bank balance so you may pay off your enormous debt. This is where the core mechanic is solid; the act of mining for minerals in order to sell and consequently increase your mining capacity is not something new. We’ve seen multiple browser based games have the same idea, and that is not necessarily a bad thing as this part can be quite enjoyable. Your main method of mining these rocks is to simply shoot at them and wonder what may be discovered; sometimes you will encounter gems which you simply fly over to collect or it may be one of the alien life forms which can be a complete annoyance to you as they have a penchant for munching the minerals you so badly require. You may encounter one of the many explosive hazardous entities that expand before detonating, taking a sizeable chunk of asteroid with it so caution must be taken while dealing with these blighters.

You also have to take into consideration your overall energy levels, as everything from firing your lasers, to thrusters and taking hits drains your meter. These can be replenished from discovering the rocks which contain energy crystals indicated by a circular icon, though there is a caveat with this system. Your ship’s hull can carry a finite amount of cargo, so the more minerals you collect from mining means the less free space you have for those precious energy crystals, therefore a degree of micromanagement is required for successful mining operations.

Exploring the asteroid, finding minerals, encountering all kinds of alien life forms, it is quite a gentle time sink if you let yourself go with the flow. However, the issues that were encountered during the gameplay forced the time with the title to be cut short on a number of occasions. First of all, the general graphical style of the game caused a number of issues. From the menu screens to the in-game visuals, everything was hard on the eye and at times just down right hard to distinguish. While efforts have been made to accommodate those who are colour blind, certain visual effects had a negative impact on a family member who does suffer from epilepsy. The main offender for this would be the flashing pieces of rock indicating that there are energy crystals held inside, the pulsating circular icon was too much for him and he had to physically turn away from the screen. 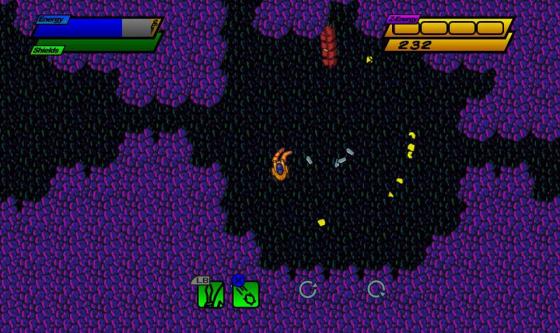 This kind of eye strain from the visuals meant we could only play the game in short bursts, as our eyes were extremely tired from a small amount of battering from the garish graphical mess we were experiencing which is a shame, especially with the game nearly inducing epileptic fits in a family member.

The core idea of this game can make for a very entertaining title indeed, f space mining is your thing and you have to have something on the Xbox then feel free to grab this as it is only 80 Microsoft Points, but in our opinion it may be worth hanging on for something less stressful on the ol’ peepers and hopefully less likely to cause someone a fit.

Sector 7-4-9er is an odd title, hidden away in the depths of the Xbox Live Indie section, the space mining sim has a solid core idea but seems to fall short in a number of other areas. To begin with you’re placed in the role of a person down on their luck, who owes quite a large sum of money to the space mafia.

You do realise that the rating scale is out of 10 right? Are you rating everything down because you had a problem with the color scheme?