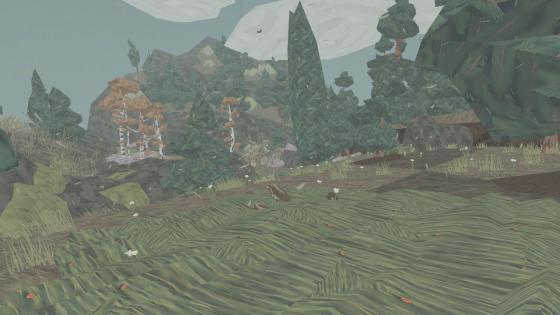 Before launching Shelter for the first time, I knew very little about the game, and even less about badgers and their requirements to survive, but once your fingers find the WASD keys, the situation becomes pretty clear. You assume the role of a mother badger caring for her young, and this is the motif of the entire game.

Upon beginning your journey, you will find yourself in a darkened cave surrounded by your five cubs, one of which you have to learn to revive without any form of instruction. From this it is easy to see that this game is going to allow the player some independence instead of helping them through the levels. Aside from informing you of the ‘catch’ and ‘run’ buttons, you’re on your own, though I suppose this enhances your true survival instinct.

Once you eventually make your way out of the cave, you are free to roam the new world surrounding you. The art style in this game is strange but unique, resembling a forest made out of papier-mâché and patterned wallpaper. Unfortunately this is somewhat spoiled by what appears to be a brightness that is set far too high, washing out the majority of the colours, making all textures in the game look bland and dull. 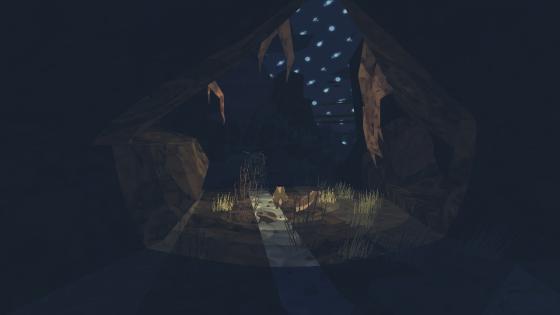 You begin with five young badgers, only differentiable by the patterns on their backs, and your task as a mother is to hunt for their food to stop them from turning into a pale grey colour, which will eventually lead to them passing out. Luckily, the food in Shelter isn’t hard to find as any that you miss, your cubs will point out for you. Apples you can knock down from trees, vegetables you dig from the ground and your shift key gives you the ability to run after, and catch small critters. The only downside to this is that it cannot be shared between your cubs, if one is hungrier than the other, you’ll have to be a terrible mother and pry food from one badgers mouth, and give to another that is looking considerably paler.

The most threatening enemy in this game is the large bird that squawks and circles above you in certain areas of each level. The easiest way to get around it is to run from bush to bush, ensuring your helpless young aren’t exposed to the open for an extended amount of time. This is the point where you begin to feel a real sense of fear and danger for them, the incredibly tense music doesn’t help the situation either. 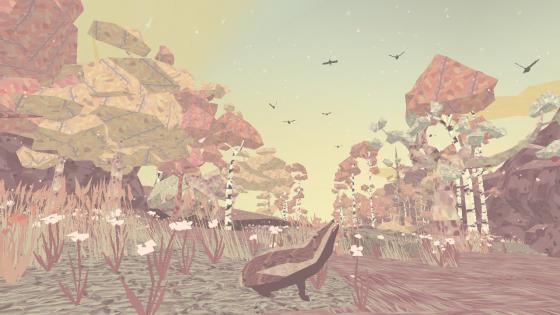 When faced with the task of escaping the eagle, all sense of direction and need for food is lost, and failing to go in the right path will most likely result in all of your babies passing out from hunger, as food you’ve already picked up will no longer be there. If you lose all of the cubs before the next level, the only options available are to restart it, or find food for each individual badger to revive them along your tracks. This is more or less a necessary step as moving onto the next stage on your own is somewhat pointless; scavenging food isn’t an important task with no young badgers to feed, and steering clear of the treacherous bird in the sky becomes nothing but a simple stroll when you’re a lonesome mother badger.

Overall Shelter is an entertaining, laid-back but disappointingly short game that could be easily played through in a few hours - provided you don’t take the wrong route on multiple occasions, and if any game could spark your fear and concern for helpless animals in the wild, it would be this game.

Overall Shelter is an entertaining, laid-back but disappointingly short game that could be easily played through in a few hours - provided you don’t take the wrong route on multiple occasions, and if any game could spark your fear and concern for helpless animals in the wild, it would be this game.

Oh man! I want to play this so much. I'm seriously considering shoplifting a gaming computer from PC world! :p