Having played Craft Keep VR a while ago - my first VR experience - I was interested when Shoppe Keep 2 came around. Run your own ye olde shoppe, vanquish shoplifters and adventure around the place.

Played in first person, Shoppe Keep 2 has you opening up a new shop in town. It’s not a very big town, and definitely isn’t a rich one as you’re the only person in town who’s selling anything. As you progress - by paying taxes on all sales - more people come to town and you can eventually leave. The gates are closed until you’ve fulfilled certain criteria, presumably to prevent you from getting too much money too quickly.

Which is what I did as soon as the gates opened - I went exploring and found some shiny gems, which I mined and sold for over 1000 each of pure profit. Of course, I wasn’t well enough equipped to take on all of the creatures, but could luckily avoid them. And, of course, hunt the wolves and spiders that were closer to town. 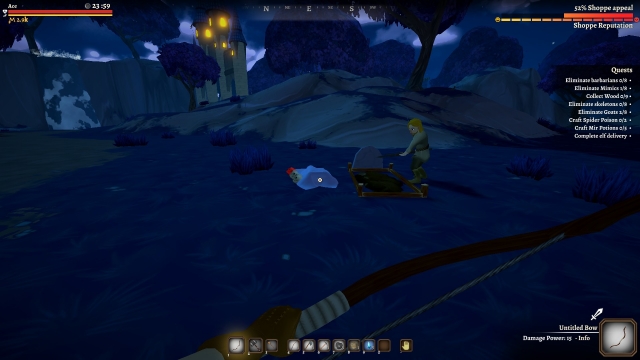 I have no idea what this guy's story was

Not all of your stock will come from outside, though, as you’re given an order form which you can use at any time. You will gradually unlock things, but initially you’re stuck with low tier items such as the Poor Shirt or Water Bottle. As the town grows, you also get access to better shop displays, as at first you only have tables and simple stands. It’s much easier to put a bunch of things on a big display, rather than have a bunch of stands taking up space.

These displays will need to be kept in good condition, as every three days you’re visited for an inspection. It’s easy enough to do with your mallet, but you need to remember to do it! Forgetting will result in a bunch of rubbish that you need to clean up, and you’ll have fewer displays. The inspections change what they want to see - it may be the number of displays you have, or the decorations. I’m not altogether sure what frequently failing an inspection will do, but passing it will help ensure that people actually want to drop by. 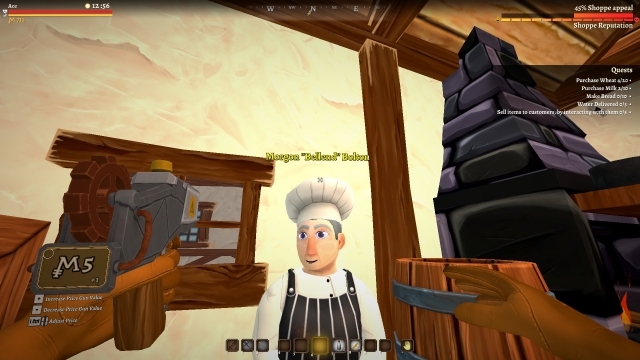 As you grow the town of Shoppe Keep 2, you will get access to more customers and new people who can craft things for you. Weapons, armour, food, potions… They usually require things that they sell, or that you can get from being out and about.

The problem with having to go out and about, is managing your time effectively. Your shop needs to open, otherwise you get no income. But if it’s open and you’re not there, the satisfaction goes down because people are stealing and dropping rubbish all over the place, and shelves aren’t being restocked. Once you’ve upgraded the town a couple of times, you can purchase machines that stop thefts and restock shelves, but by that point you’ve been playing long enough to have some strategy behind leaving the shop closed.
I think that’s my main problem with Shoppe Keep 2. There’s just so much grind going on. Unless you’re willing to earn very little profit by paying the maximum tax, the town will grow very slowly. All the while, you’re collecting quests left and right - but then you have too many and some just straight up disappear. Did I take too long getting around to telling the blacksmith to craft those leather shoulders? Did I actually do it and forget about it? There’s no quest log, other than showing you what you currently have on, so I’ve no way to find out.

At the same time, I’m waiting around in the shop ready to restock shelves and clobber robbers, because it’s between 8am and 6pm and that’s when the inspection might happen. Meanwhile, I’ve bought the farm just north of town which also requires my attention! 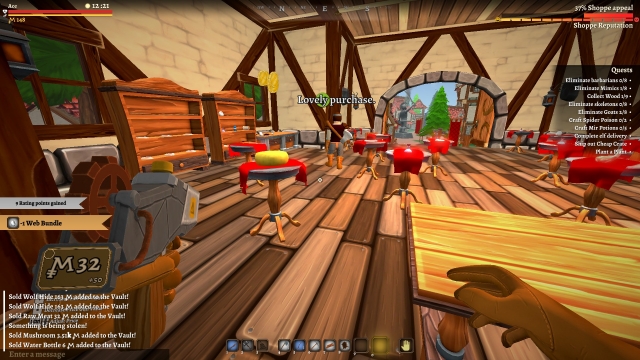 On the other hand, you might decide to just grind through some creatures to complete one of the quests you had going on. Unfortunately, the close range weapons are pretty much awful, and the long range one isn’t very effective. You basically have to be stood on top of a creature to hit it, which means it’s going to kill you if your armour doesn’t outclass it.

My final gripe is that visiting the shop to the east and the shop to the north will give you a box for each. Fulfilling orders in them will grant you special items for your shop. The boxes are located “near the management office”. I’ve scoured the town looking for these two boxes and have found no sign of them anywhere. A quest marker of some kind would have been greatly appreciated.

There is a multiplayer mode, but I was unable to try it out as I don’t know anyone else with Shoppe Keep 2. I presume that it would be more fun, giving people the option of one player manning the shop whilst others quest, but I can’t guarantee it. 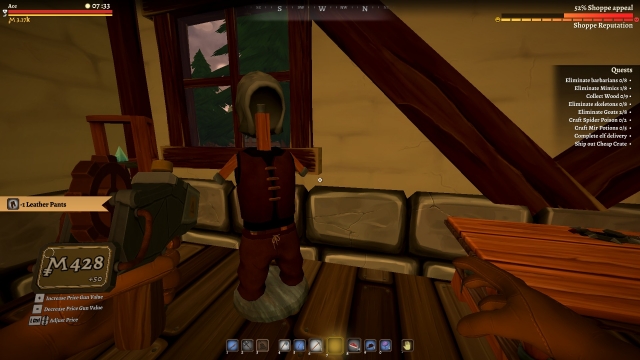 This standing display was all I had to aid me...

One thing I haven’t mentioned yet, is how you “level up” your character. Everything you do feeds experience into a few areas - running around a bunch will feed into movement for example. As you gain more points in each category, you can select an ability. Whether it’s more health or a discount from the store. It’s not very clear what increases which one, or how much by, but it’s an interesting way to do it. If you stand around the shop all day, you’ll never be able to sprint, you fight more and so can fight better or longer.

There is some stuff to enjoy about Shoppe Keep 2, but there’s unfortunately some stuff to dislike. It feels like it left Early Access a little prematurely, as it’s missing some things as I’ve explained, which would have helped the quality of life.

There is some stuff to enjoy about Shoppe Keep 2, but there’s unfortunately some stuff to dislike. It feels like it left Early Access a little prematurely, as it’s missing some things as I’ve explained, which would have helped the quality of life.