Every once in a while, a new game comes out that is nothing like anything you have played before. Developed by Cael O’Sullivan, Shut In is a crazy mix of a psychological horror game and a comedy with a smart-ass narrator. The game has one main goal, get out of the house. Sounds simple enough, but you soon discover that it’s not as easy as just opening the door and walking out. The house is full of puzzles and hazards that will gladly kill you, but if you do get taken out it's okay, you can just try again tomorrow. 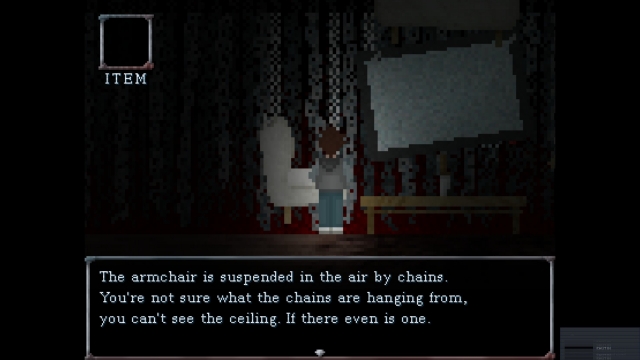 Shut In is not a long game by any stretch of the imagination. My first run through took a little over two hours to complete. As you play you will learn which hazards to avoid and how to use the random items you find scattered around the house, most in odd places. A lot of the game is trial and error; I never would have guessed that turning on a lamp would kill me as it explodes in my face. After that happened the first time I knew to avoid doing that. Just like when you go into the bathroom and find a screwdriver jammed into the shower, it makes sense to pull it out, until you realise that if you do, swarms of vicious bugs come pouring out of the shower and will eat you unless you get out of the room fast enough. Good luck doing that though because the door doesn’t have a handle so you can’t get out. So first you have to find the handle and reattach it before you pull out the screwdriver. Shut In is full of puzzles like this that you just have to experience and explore to figure them out. 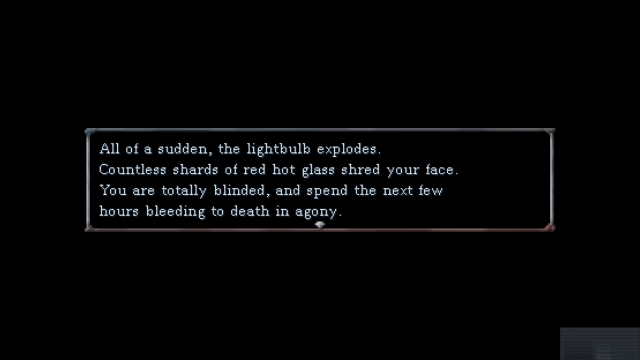 The game starts with you in your bed debating on if it’s worth getting out of bed. When you do decide to finally get up, you will find that the room is a huge mess full of dirty laundry. a broken lamp and alarm clock that you’ve been meaning to fix and just haven’t gotten around to doing yet. There seems to always be an excuse to why things aren’t getting done. I realised that I do the same thing when I don’t get the things done that I was planning on doing. Sometimes it’s pretty easy to convince yourself that you are too tired to do something and your time is better spent having a nap or watching TV. Shut In really made me realise how easy it really is to convince yourself that you aren’t good enough or it isn’t worth your time to put in the effort to do something. It is not easy to get out of this line of thinking, and this game shows how big of a struggle it is. It even has you rethinking simple tasks like making your bed in the morning. Is it really worth the effort? 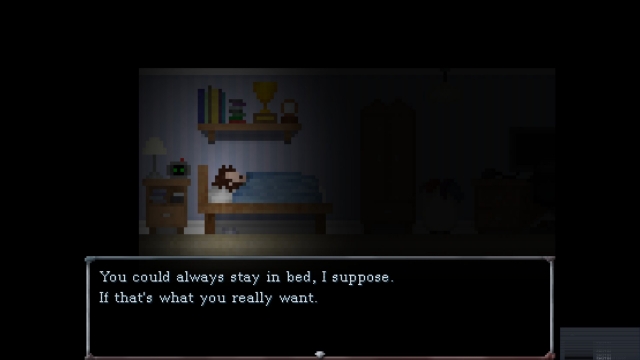 Being trapped inside this house represents depression and being isolated. Which is really timely considering all the lockdowns and craziness going on this last year especially. Though being scared that any move you make is going to kill you really adds to your level of anxiety. Especially when every decision you try to make is questioned by the narrator. “Are you sure you want to do that?" I’ve never second-guessed decisions I’ve made in a game as much as I did in this one. The narrator is always insulting and belittling you, trying to make you feel bad about yourself. Especially if you do happen to get to the end, that’s when the insults really start flying. Apparently since I only died eight times it means I wasn’t adventurous so I was boring and I’m not much fun. Shut In is definitely a unique experience, full of a lot of crazy puzzles to really get you thinking outside of the box. The narrator, who I’m sure you have figured out who it is just by reading this, is quite mean and definitely doesn’t make you feel good about yourself. It is worth playing if you get a chance, but don’t expect a super happy feeling once you are done, so I am glad it wasn’t a super long game. At the end of the game, you are shown a summary of how long you took, how many times you died, how many of the possible threats you succumbed to and how many items you ended up finding. Also, how the heck is there a rocket launcher in this game, and where do you find it? I found a plunger, knife, lighter, garbage and spatula, but nothing nearly as destructive as that! Then again, should I trust the narrator when they tell me I’m lame because I didn’t find it, maybe they are lying to me once again… SHUT IN (Reviewed on Windows)

A psychological horror game full of puzzles that make you afraid to do anything in your house, including getting out of bed. The game deals with depression, isolation and how that affects your inner dialogue and feelings.