The traditional shoot ‘em up (or shmup) is certainly no stranger to having a female cast thanks to the popularity of the Touhou titles and other popular niche titles like Cave’s Muchi Muchi Pork. Sisters Royale keeps up the tradition by having a roster of five sisters vying for the affection of their future husband (whether he knows it or not) by eliminating each other. 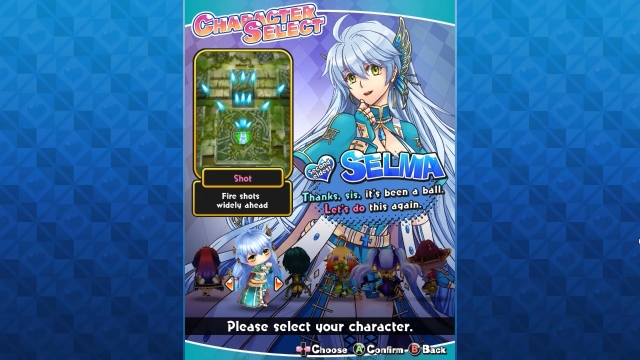 Taking place across five stages, you’ll make your way up each level taking on waves of magical enemies before taking on one of the sisters to prove your superiority. One unusual aspect compared to other games in the genre is the fact your character is walking on the ground and obstacles and hazards restrict movement. It’s not the only game to do this but isn’t seen that frequently!

Each stage has a unique gimmick to go along with this, from ice puddles that cause you to slide to being in darkness apart from a circle around you and the lamps you hit on the stage. This makes actually moving around each stage something you have to consider when dodging the barrage of death heading your way. 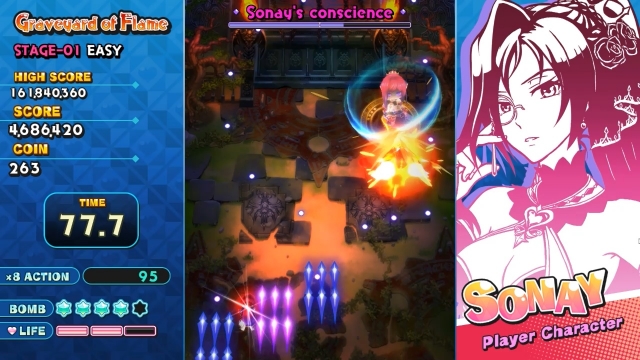 Visually the game has a very bright and bubbly aesthetic, from the cute stylised characters to the really adorable if generic enemy designs. Even with the abundance of saturated colour on screen, the enemy bullets are easy to discern thanks to nice visual flourishes. It can get extremely hectic but not seeing what killed you isn’t an issue!

Each of the sisters (which handily fill out the required archetypes including Sensible Big Sister, Tomboy, Enthusiastic Little Sister amongst others) has a unique set of moves, with differing shot, summon and bomb types making them all play quite differently. For the most part, things control how you’d expect for a bullet hell style shmup, with your main shot being more powerful than your “summon” which in this game is a unique secondary attack that normally also slows you down making bullet dodging easier.

I say normally because none of the characters behave alike. From differing main shots that range from simple straight ahead shots to a homing spread and summon attacks that can be as diverse as a laser beam aimed in the direction you move to a demonic head that vacuums up bullets before releasing a torrent of pain.

Because of this each sister plays dramatically differently, Selma for example is a character you want to get up close and personal with as her regular spread shot is weak but her summon is a strong three-pronged icicle affair that emanates around her. This melee style attack is extremely powerful and will rip through larger enemies but you are at immense risk at all times.

The eldest sister Sonay however is more straightforward with her regular straight shot doing average damage and her summon being a fiery attack that homes in on enemies around the screen. It does leave you vulnerable but it is essentially an attack that can clear the screen in seconds. Each sister's bomb essentially works the same way but has different visuals, acting as a panic button clearing the screen of any bullets and causing damage to enemies as you’d expect.

Gameplay-wise it plays very similarly to Alfa System’s other popular shmup creation, the Castle of Shikigami series. Basically as you “graze” bullets (where you rub up close to bullets without becoming so close you die) and come close to enemies your shots will increase in power (and visually change). By grazing and killing you raise your multiplier — which the game calls your Tension — and also increase the amount of coins that drop, again increasing your score. 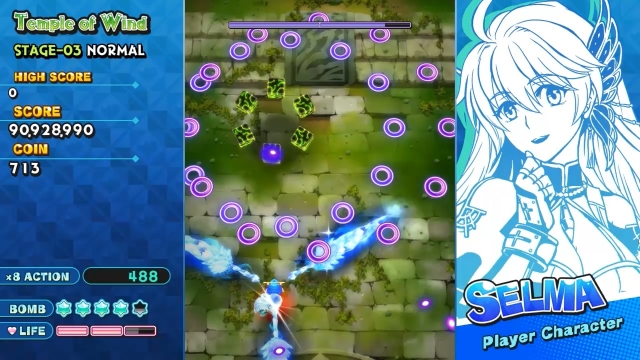 This encourages you to play risky, always putting yourself in danger to get that multiplier up. Dotted around each stage are also fairies that, when collected, double your tension which if collected at the right time can massively increase your score. It’s not the most complex scoring system ever created but how it’s presented and the feedback the games gives you when you put yourself in danger makes it quite satisfying to try to rack up those scores.

As mentioned earlier, visually it’s quite an attractive if simplistic game visually and this also rings true for the audio. The sound effects are fine, although the distinct change in sound when you graze an enemy or bullet and your shot changes is pretty great. The music is good although I don’t think you’ll be humming any of the soundtrack to yourself afterwards, it’s mostly forgettable but the final boss track and the trumpet heavy stage five especially will have you tapping along whilst playing.

You’ll notice I’ve not really mentioned the story at all as it’s incredibly basic, each of the sisters is basically fighting for the right to marry a poor chap called Yashin. There are some short dialogue sequences at the start and end of each stage (which you can turn off in the options) where each sister gives some sass back and forth to their siblings but it’s entirely uneventful and just a fun framing device. 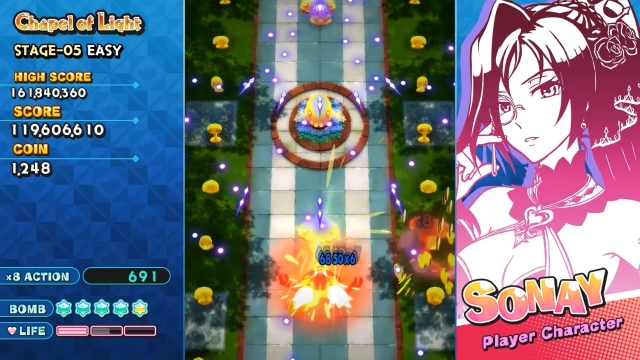 All in all Sisters Royale is a fun little bullet hell that is actually incredibly approachable in its easy setting for those interested in getting into the genre. It’s got a lot of charm and is immensely replayable thanks to all the characters behaving so differently! For the budget asking price it’s easy to recommend, for both newcomers and old hands looking for something just a little different.

Sisters Royale: Five Sisters Under Fire (Reviewed on Xbox One)

A fun little bullet hell that has a ton of replay value and a charming visual appeal. Quite an approachable entry for those daunted by other shoot ‘em ups with a scoring system that rewards skill.

Sisters Royale: Five Sisters Under Fire Coming to Xbox One