Have you ever wondered what happens inside dungeons when the adventurers are not there? Well, for one fox-eared necromancer named Reva it is time to embark on a quest to hold the biggest, funnest, most awesomest party ever while making loads of new friends along the way. This is the setup for Skeletal Dance Party, where players need to cast spells in order to solve puzzles while building an undead party. Designed around a bouncy physics system that leads to some interesting and fun results, can the title hold itself together or does it fall apart faster than a skeleton?

Skeletal Dance Party makes good on its promise of a light hearted premise by presenting an interesting narrative from the get go. After losing her family, Reva is in need of some cheering up and thanks to the newly found power of necromancy a plan is set in motion. Of course, putting together a party is no easy feat and it is made more difficult when the Temple of Righteous Light get involved and want to put a stop to your questionable antics. So prepare your spells, raise an army and invite guests to the party all while fighting holy warriors. Sounds easy enough, and it makes for an enjoyable narrative throughout. 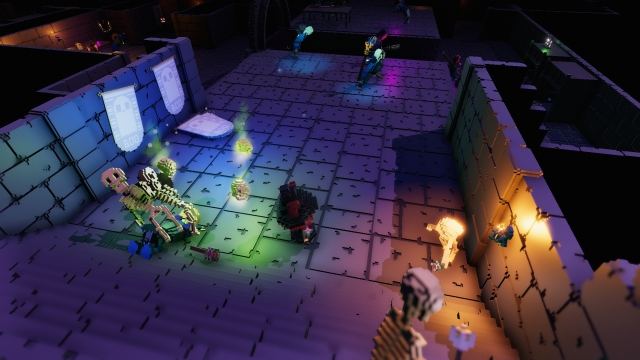 You’ll move Reva though the many levels within Skeletal Dance Party with straightforward controls but where the gameplay gets interesting is how your spells work. With everything in the title being physics-based and you having the power of telekinesis it is possible to make some brilliant results. From solving puzzles, picking up objects or even throwing tables at enemies, there is a lot you can do with this simple power. Combine this with the group of undead you have following you and you’ll be able to swarm your enemies from all sides as you end their lives, only to raise them as an ally shortly after.

It wouldn’t be a dungeon without loot though and Skeletal Dance Party makes sure there is plenty to find. As you navigate through the twisted halls of the dungeon you’ll find items and equipment for yourself along with plenty for your skeleton friends. They will help themselves to what they find from hats to weapons, spell books and even musical instruments. Quickly it will feel like you are leading an army of Brads into battle but that just adds to the enjoyment of the title. 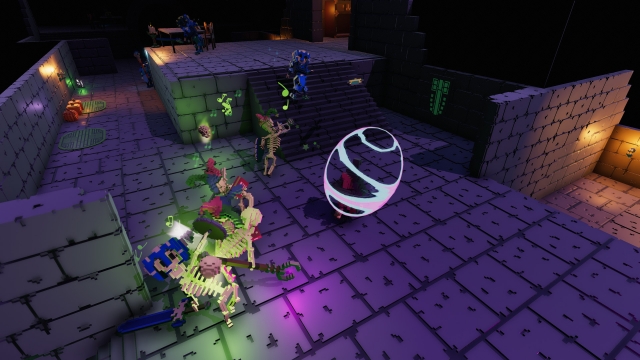 Though the gameplay is solid and functions as intended the title does suffer from the odd difficulty spike which can cause unexpected deaths. That isn’t to say that Skeletal Dance Party is a hard experience but having your character die completely out of the blue sucks in any title. Thankfully death is not too punishing and the only real pain is having to navigate through the twists and turns of the levels again. Though thanks to the bouncy animations of the characters you’ll likely end up smiling during this.

One area that Skeletal Dance Party really shines in though is the presentation. With a charming voxel art style complete with a cheerful soundtrack the title is a joy visually and auditorily. This is made better thanks to the inclusion of voice acting for the characters which brings their unique personalities to life in a compelling way. The aforementioned bouncy animations that bring a smile to your face just seal the deal here, resulting in a fun presentation that remains fresh during the hours of gameplay.

Skeletal Dance Party is at the end of the day a title that is clearly crafted with love and the result is a highly enjoyable experience. With its captivating presentation and fun gameplay, the title is able to take a solid concept and turn it into hours of fun as you help Reva on her journey to host the best party ever.

If you are looking for a fun experience with a charming narrative and presentation then Skeletal Dance party is the title for you.

Skeletal Dance Party Is Out Now