As a general rule, I don’t tend to regard demonic skeletons with much in the way of affection. They’re typically quite rude, aggressive and unpleasant. Not great dinner party material to say the least. I’m willing to make just one exception, though, and that’s for Skul, the lovable skeletal anti-hero of pixel art action platformer Skul: The Hero Slayer. When those dastardly humans mount a full-scale invasion on the demon world, imprisoning the population and kidnapping the demon king, it’s down to Skul—as the only non-captured demon—to wage war on humanity’s army. Can Skul Single-handedly save the Demon King, defeat the fearsome “Hero of Caerleon'' and rescue their demonic kinsfolk? Let’s hope so because if they fail, nobody else is coming to the rescue. There’s a little more to the story than the basic premise outlined. Cutscenes unlocked throughout the course of the game delve into the backstory of the conflict between humans and demons, but the central story doesn't get any more complex than "fight humans, save demons". For a game like this, a roguelike where death means starting from scratch (except for a handful of permanent upgrades) and you'll play the same levels over and over, this lightweight narrative is ideal. It's delivered with a light-hearted tone which merges a fantasy realm with real-world pop culture and keeps the whole ‘interspecies war’ theme from getting too bleak. With that said, the game isn’t afraid to dip a toe in some darker waters here and there, particularly near the end.

So, how on Earth can one cutesy skeleton take on an entire army? Well, they’ve got a trick up their sleeve. You see, Skul (single “L”) can wear the skulls (double “L”) of their fallen skeleton comrades and make use of their unique powers, skills and weaponry. Don’t worry: as it turns out, a skull-based power swapping mechanic is not as morbid as it sounds. In fact, it’s exactly what brings variety to the game’s fast-yet-precise 2D jumping, slashing and dashing gameplay. Despite Skul: The Hero Slayer’s fantasy setting, there are skull types that pull from every corner of our culture. Some fit snugly into the game’s existing world, like a spear-wielding Caerleon soldier; others draw from our shared cultural heritage, such as a classic Egyptian mummy or court jester; and a few of them are distinctly more modern like an electric guitar-wielding rock & roll warrior. Oh, and keep an eye out for one indie gaming reference among the available skull types: you’ll know it when you see it. 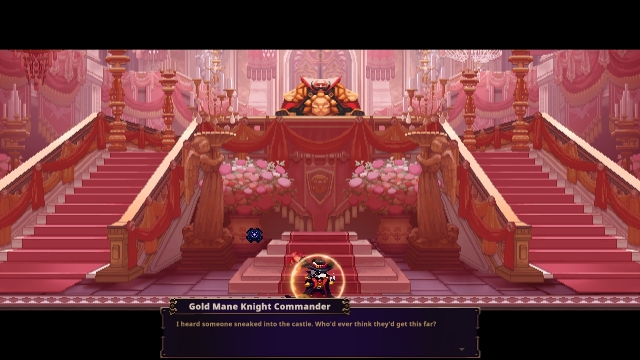 Each skull falls into one of three categories which determines their movement and attack style: Speed, Balance or Power. One of them is fast but weak, one slow but strong and the other is a half-way point between the two; I’ll let you figure out which is which. Beyond those basic categories, every character comes with a distinct basic attack, a unique set of abilities and sometimes a character quirk too. The electric guitar skull, for example, emits magical damage by playing their instrument (basic attack); they can also throw down an amp to deal constant damage from afar and physically hit enemies by wielding the instrument like a literal axe (two of their potential skills). In addition, this fearless fighter can summon their bandmates by playing music uninterrupted for long enough (their character quirk); this causes the power of rock & roll to fill the stage, damaging every enemy and buying you valuable breathing time. That’s a hefty moveset for being one of what feels like a 20 or so (possibly more) potential characters. And while some are more complex than others in terms of their unique skills, it’s genuinely exciting getting to grips with even the more basic skulls. The team at SOUTHPaw Games has clearly put a lot of thought into making each one distinct, suitable for a different playstyle or able to interact differently to the different stat-boosting or ability-granting items collected throughout each run through the game. Speaking of which, the item system is another ingredient in this roguelike cocktail which hits the spot. Unlike many games in the genre which grant players bottomless pockets for upgrades and items, Skul: The Hero Slayer limits how many you can carry. This means that once you collect nine items, which won’t take long, you’ll have to start swapping them out, choosing which ones are more beneficial or best suit your currently equipped skull. “Do I want 40% more magical damage or a flying spirit which zaps enemies every 8 seconds?” These are the kind of tough, heart-wrenching questions the game forces you to ask on a regular basis. Item management, then, is deceptively complex and engaging; it’s the thing which can determine whether your character tears through stages like an Arctic blizzard or perishes faster than a snowman in a sauna. There are also ability-based items, known as Quintessence, of which you can only hold one at a time. These grant you a powerful offensive or defensive ability—limited by a cooldown—in addition to a passive effect like bonus damage or increased movement speed. On top of your nine regular items, Quintessence adds yet another way for you to craft an effective build around your skull’s moveset. 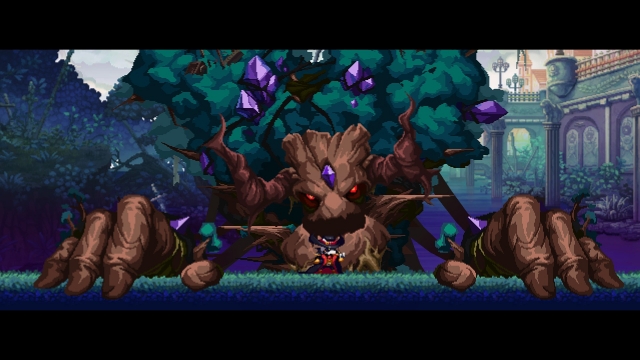 The random way items, skulls and Quintessence are doled out by the game may frustrate some players. The only choice you’ll have in how you craft your character comes from “pick one of three” item pedestals which follow mini-bosses and the in-game merchants whom you’ll visit periodically. I, however, found the highs and lows of this game’s RNG-based mechanics endlessly addicting. For every time it left me disappointed with a streak of incompatible skulls and items, it thrust me into a position of power with a majorly lucky loadout of items and skulls. Of course, there’s a lot of skill involved in the game too: it can throw dozens of enemies at you simultaneously; some rush in to attack you up close, others launch projectiles from afar. There are large, brutish enemies; small, jittery enemies and everything in between. Even with the best gear, you’ll need to know what you’re doing to avoid a swift demise. Conversely, if you’re good enough, survival is never absolutely impossible, although it’ll be damn close if your build isn’t up to the task.

Nowhere does the game’s difficulty become more apparent than with its boss battles. These range from colossal fantasy monsters to—rather less exciting—guys in armour. While many of them are fiendishly difficult, able to swat aside even a powerful skull bearing a loadout of complementary items, they’re bound by strict patterns. This means that victory lies in recognising their openings and striking when they’re incapable of striking back. It’s sometimes possible to beat bosses by relying on your skull’s sheer power, but that’ll never be a reliable path to success. No matter how many lucky item drops you accrue, there’s no replacement for a well-practised pair of thumbs. 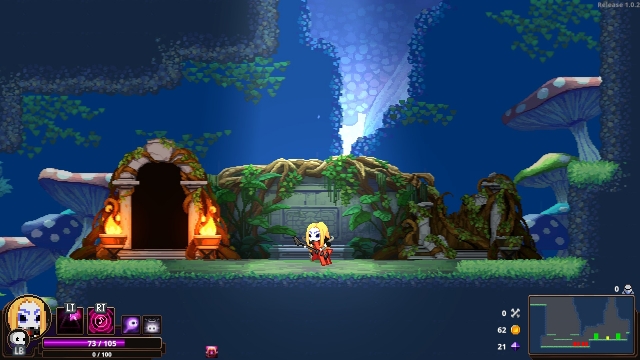 The one thorn in this roguelike rose comes from the clunky platforming sections which occasionally crop up. Due to the varying sizes and movement capabilities of the different skulls, crossing a spiky gap or avoiding a projectile without taking damage can sometimes seem nearly impossible. When health is such a precious thing which can be lost so easily, failing to these poorly thought-out platforming sections is controller-clenchingly frustrating. It’s a relatively minor gripe, but I just can’t let it pass without naming and shaming it.

Despite minor level design hiccups, Skul: The Hero Slayer is one outstanding roguelike platformer. Its gameplay is fast, precise and full of variety. The world and story are memorable too: simple, but warm and full of life (ironic, considering the skeletal protagonist). It’d been a while since a game was able to have that ‘magnetic’ effect on me, but Skul changed things. I’ve been drawn to it since welcoming it onto my desktop, and I don’t see anything prying me free for some time.

Simple enough to draw you in, yet complex enough to keep you interested for the long haul. Skull: The Hero Slayer expertly balances risk-and-reward elements with player skill to make a wholly engaging action platformer.