Slain: Back from Hell Review

When Slain! first released it had a rocky launch: lots of bugs, way too difficult, and just the usual launch issues. Since then though, things have been fixed, re balanced, and just overhauled to the max. Now it's officially relaunched as Slain: Back From Hell, and it's simply glorious! An arcade action game with emphasis on combat and puzzles, Slain: Back From Hell is what happens when Castlevania and Dark Souls had a baby, and then that baby learned how to play some serious metal.

At first I had some issues with this game. It's been awhile since I've played a game like this, or anything resembling Dark Souls-like difficulty, so I had to go through an adjustment period where I was literally bashing my head into my desk. "You have been SLAIN!" graced my screen far too many times. After this adjustment period I got into the swing of things and made great progress, only dying when I made a stupid mistake. 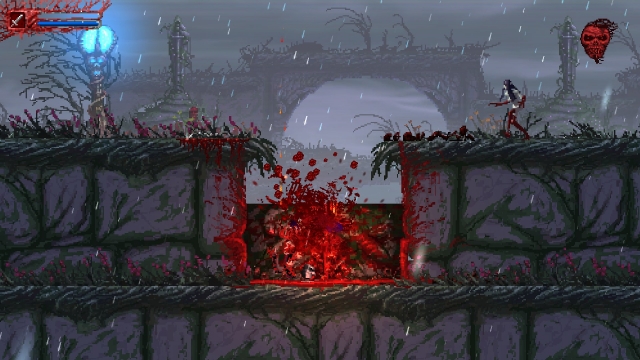 Slain: Back From Hell is a side-scrolling, platforming hack and slash. You progress through each stage in a very Castlevania-like fashion. Hitting switches, killing monsters, and avoiding traps. You control Bathoryn, a dark hero who is awakened to save the 6 realms from impending doom. His weapon of choice: a giant claymore. Using this claymore, Bathoryn cleaves all enemies in his path, and then later using elemental energies to charge his sword and exploit enemy weaknesses. He also has access to magic, which he can use to fire a projectile (which will match the element he is currently using) and to perform a massive magical screen-clearing explosion when in a pinch.

The biggest thing to pay attention to while playing is the environment. In many stages, there are traps cleverly hidden on the floor in your forward path. Once you have discovered these traps, you can avoid them easily. Other obstacles are not so clever, such as the horde of skeletons and witches blocking the path. One tactic you can use to stay alive against the hordes is parrying. If you block at just the right moment, you can parry the attack and perform a powerful riposte. When done properly, you can recharge a portion of your mana so you can perform more magic attacks. When you finally master the timing required for a parry/riposte, the game becomes MUCH easier to handle. Another thing to keep in mind is that projectiles can be reflected by hitting them, providing you a way to defend yourself from them. 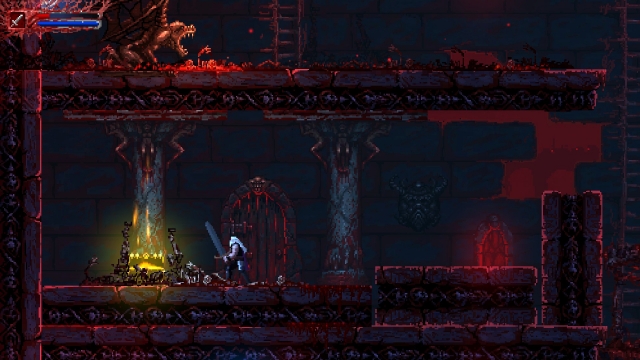 Slain: Back From Hell operates on a checkpoint system. As you progress through each stage you will come to pillars that light up once you touch or pass them. When you are slain, you will be returned to the last pillar checkpoint that you touched. While this is a very handy feature to have in a game like this, sometimes when you are dealing with a particularly difficult section you will be redoing the section many, many times until you finally reach the next checkpoint. This can be quite frustrating at times, and if this happens it is recommended to take a short break.

At the end (and often throughout) each stage, you will be facing bosses, mini-bosses, or a battle gauntlet. Waves of enemies will spawn one after another, and it'll be your goal to simply survive. The bosses are often pretty large, and follow a script/pattern, and are usually easily dealt with once you figure out those movements and attack patterns. If you are used to playing something like Mega Man, you'll have no issues with the bosses. 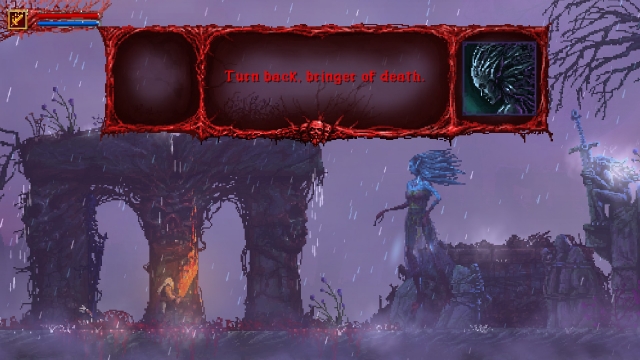 The Steam store page describes the game as having a gruesome pixel art style, and this is very true. Slain looks like it might have felt right at home on the SNES. For a pixel style, everything is really detailed and animated very well. You'll see a great example of this animation after each boss fight when Bathoryn gives thanks to the Great Horned Metal God. Oh, and blood/gore is everywhere. Generous amounts of blood and gore are all over Slain: Back From Hell.

A nice touch added to the options menu is the ability to have scan lines overlaid on the screen, giving a really retro or arcade feel. There are two different kinds available, as well as the option of no scan lines at all. "The most metal soundtrack you’ve ever heard." This statement, found on the Steam store page, is extremely accurate. The soundtrack is quite amazing, and works very well for the game. The game isn't being played correctly if you have the sound or music turned off, as it's very much a part of the game's feel and ambience. It took a few minutes to get a controller configured to play the game comfortably, as the default controls were a bit odd. You can play with the keyboard, but a controller is highly recommended. No lag or FPS drops/issues were noticed at any point during gameplay.

After a bumpy start, I started to have a lot of fun with Slain. Once you get into a groove, it's hard for anything to stop you. Generous amounts of metal, blood, and headbanging give this game a unique feel, one that is hard to give up. Slain: Back From Hell is well worth a try.

Slain: Back from Hell (Reviewed on Windows)

You will go to Hell and back, just to play this game a little more. Definitely worth playing!

Slain: Back from Hell