Smelter begins with a running start. You are instantly thrown into a beautiful anime-like intro that tells the backstory of our main character Eve. Eve is a character inspired by the biblical story of Adam and Eve. However, in Smelter once Adam eats the forbidden fruit a huge explosion occurs destroying the world they are in. We see Eve falling, surrounded by darkness with no end in sight. You won’t get bored watching this because an entertaining narrator jumps in describing the predicament that Eve is in with a ton of detail. Don’t criticise him too much, he’s just trying to do a good job. 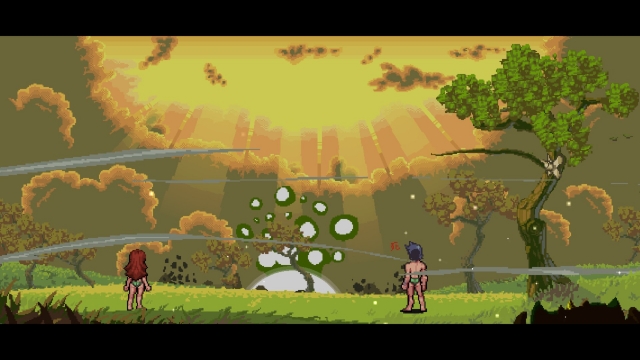 When Eve nears the bottom of the chasm, she sees a glowing green light. She suddenly lands inside of a cave. There are multiple transparent copies of Eve, each one performing a different action and standing beside what looks like a button on a controller. This acts like an instruction manual showing you how each action is performed. When Eve is exploring the cave she finds a creepy looking mask. When you walk up to it you realise that this mask can talk and he informs you that his name is incomprehensible so address him as "Smelter" and he is actually an angel. Smelter makes a deal with you if you help him recapture his empire he will help you find Adam. You agree so Smelter asks you to flootipoo. Flootipoo is when Smelter transforms himself to become armour for Eve, this includes a really cool transformation animation that looks like it’s right out of an anime like Sailor Moon. Smelter claims this whole process is a ritual of his kind and it allows him to protect you since you are so squishy. 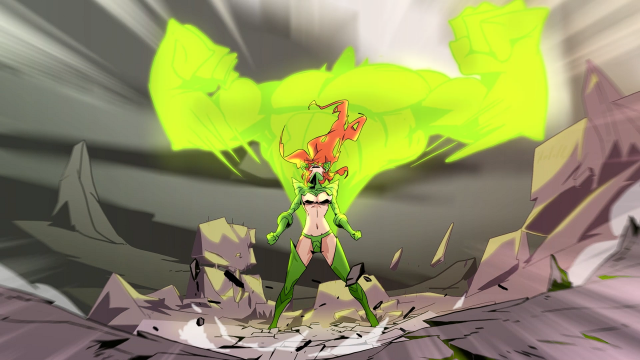 Now that you are fitted with Smelter armour it’s time to find a way out of this hell hole as Smelter calls it. As you traverse the level, Smelter becomes your guide teaching you different techniques like dash, wall jump and using your new power called Smelt. When you use Smelt you can manipulate anything that glows green including enemies. When you smelt an enemy once destroyed you will gain more HP regenerating some of your health. 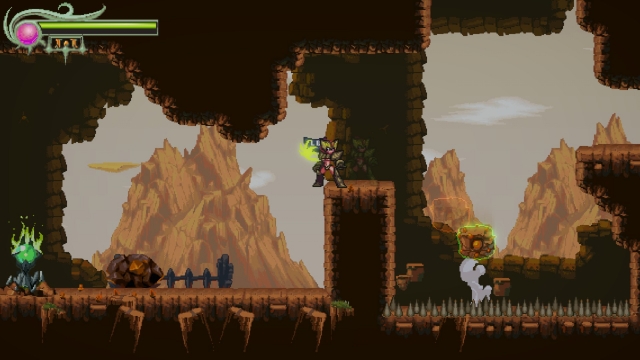 Smelter has a weapon called a Smelt Blade. When your Power Gauge is full, Smelter can unleash a powerful attack on your enemies. To use this blade, you need to have three bars filled on your gauge. If you don’t you can fill up this gauge by attacking and defeating more enemies. This will be easy since there are plenty of enemies to go after. 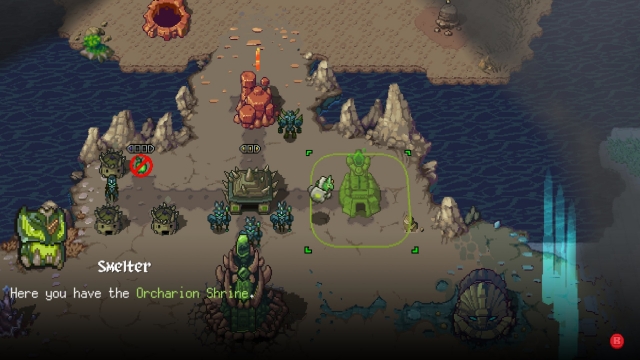 At this point you have found the caves exit and you head to a place called Rumbly Lands. Smelter claims that there are secrets hidden here that may help him in his conquest of his magnificent empire. This is where Smelter’s gameplay totally changes. Instead of being just a platformer, you are now playing a real time strategy game. Commander Zirma explains that Smelter’s loyal forces have been trying to defend the empire against the attacking enemy but they have not succeeded. Smelter’s empire is pretty destroyed, so you have to rebuild the Zirm Barracks, Orcharion Shrine that gives you apples to feed the soldiers, Zirm Houses and Zirm Outposts. You have to balance your Zirm population with the apple supply so you have to make sure you can feed the troops. 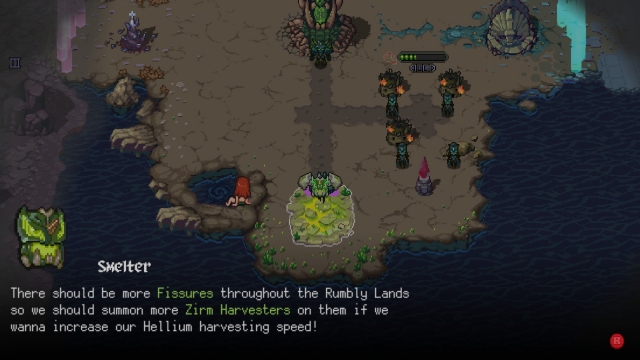 To do repairs you need Hellium which will need to be harvested. Luckily there are Zirm harvesters that are willing to help you out with this. To summon them just head over to the green fissure. Once you get this precious Hellium you can cast repair on any of the occupied ruins like the Zirm houses and fix them up. You will constantly have to be keeping all the structures repaired or else the enemy will totally destroy them. The enemy will attack the structures and also Smelter as you are floating around. If Smelter runs out of health, you have a period of time where you just sit and watch the enemy forces attack you. If your structures are still standing when the time runs out you can jump back in and continue fighting. If the structure you are supposed to protect is destroyed, you will have to restart the battle. 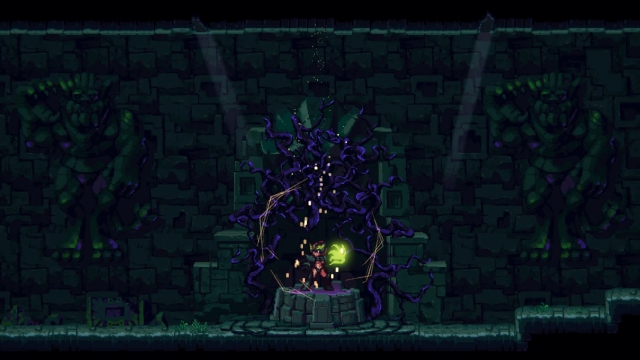 When you are playing the RTS mode Smelter has amazing music that is reminiscent of games like Final Fantasy or Chrono Trigger on the Super Nintendo. The music isn’t the only thing Smelter has going for it. The 16-bit graphics of the game are great looking just like some of the best titles on the SNES. Smelter handles mixes the multiple genres in a great way. While you are playing in the strategy mode there are areas that you can go into where the game switches back into a platforming game. I found the switching back and forth keeps the game fresh and guarantees you won’t get bored of playing the one format. 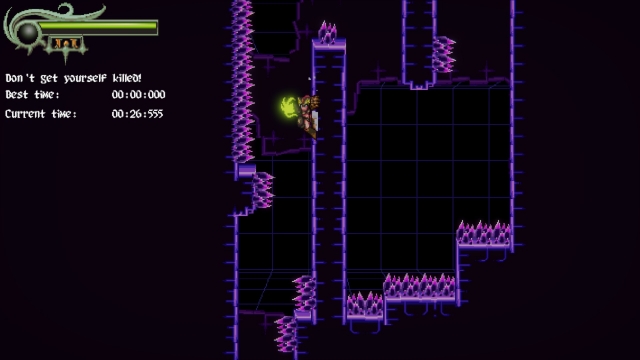 There is so much going on in Smelter it will keep you hooked for a long time. So far I have played for 12 hours and I can’t wait to go back for more. The story is funny and engaging with tons of entertaining characters to interact with. I’m pretty sure I know where the story is going, but I can’t wait to see the outcome. It’s cool to see a story everyone knows turned to have Eve kicking ass to save Adam. 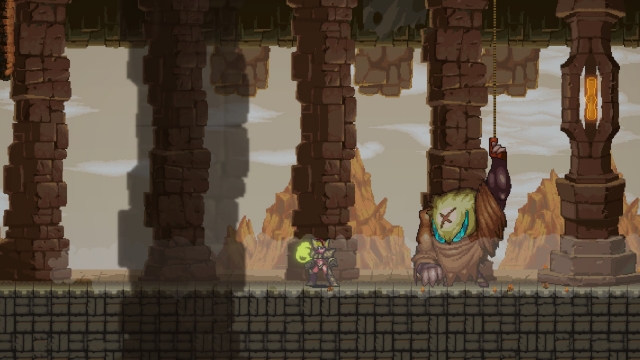 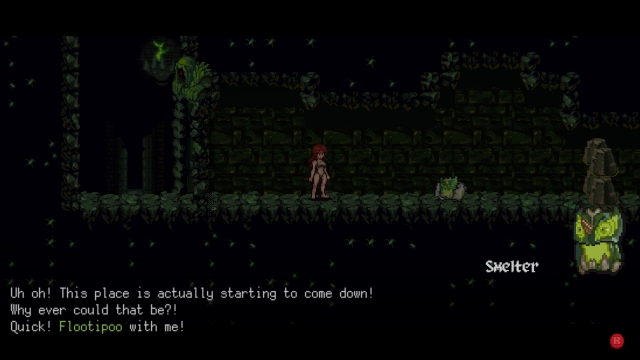 This is a cool twist on the story of Adam and Eve. With great music, graphics and a great story Smelter combines the platforming and real time strategy genres with great success.