SNK Arcade Classics 1 is a compilation of SNK's biggest arcade hits, 16 in fact squeezed onto a UMD ideal for pick up and play gamers. Included in this package are, Art of Fighting, Baseball Stars 2, Burning Fight, Fatal Fury, King of Monsters, Last Resort, Magician Lord, Metal Slug, Neo Turf Masters, Samurai Showdown, Sengoku, Shock Troopers, Super Sidekicks 3, The King Of Fighters '94, Top Hunter and last but not least World Heroes. A somewhat mixed bag of games are on offer but this keeps this package interesting. I am not going to go through each one of these games in depth but instead pick one or two from the bunch and expand on them.

The first game I played was Metal Slug. Most people will be familiar with Metal Slug or at least the franchise. It has had multiple remakes and sequels across many platforms. In this game you have to run and shoot your way to the end of the level whilst a) collecting hostages and b) trying not to die - with the second point being the more difficult one! As you run through you are subjected to relentless enemy fire from both the sides and above. You can collect power ups as you go along to make yourself more powerful which certainly comes in handy against the hoards of soldiers wanting to kill you. Metal Slug is a 2D side scrolling action game with fantastic graphics, pretty backdrops and good music. The transition to the PSP has been good for this game and I found it to be good fun and always a challenge. 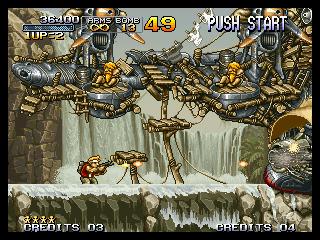 I also played Magician Lord. This is a game I hadn't actually heard of before so I didn't know what to expect. Magician Lord is a game similar to Metal Slug. The basic goal is to get to the end of the level shooting enemies with magic balls and collecting various coloured spheres that change your magician into a different form giving him extra powers. For example if you collect a red sphere, you turn into a red cloaked magician who can send a string of fireballs heading towards the enemy.

One thing I immediately noticed about this game was the difficulty levels. This game is hard, not mildly challenging but hard straight from the word go. This is something I feel that could have been revised for the handheld version of this game, the steep difficulty may alienate gamers who just want a quick go on the game, which being on the PSP, is quite a high percentage of the players. However I enjoy a challenge and I found it to be fun, if a little frustrating at times. 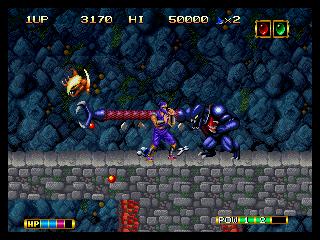 This compilation seems to include a lot of fighting games. One of these games is Samurai Showdown. It's basic fighting game stuff really; you pick your fighter and go through 10 stages trying to prove your worth to the world. You have 13 samurais to choose from in the beginning, whether you can unlock more I'm not too sure, I never managed to. Interestingly the characters in this game all wield weapons that were considered quite unusual and individual at the time. It also included bloody and fatal move videos which were filtered for the home releases back when this was released in '93 but they return in this version.

The gameplay is very fast paced which is refreshing because I personally find some older fighters to be a tad clunky and slow. Each character has an extensive moves list, this makes it interesting to explore their fighting styles more, trying to master them.
Another nice inclusion is the ‘POW' bar, after you have taken a few hits this fills up and you can unleash a super attack on your unfortunate foe. This adds an element of strategy to the game as you have to plan when the best time to use it is.
The game runs in 2D, it has some fantastic background graphics and the fighting areas are very nicely designed, with interactive items in the areas such as barrels that get cut open when you use your weapon nearby. I really enjoyed Samurai Showdown, more so than most of the last gen fighters I have played. 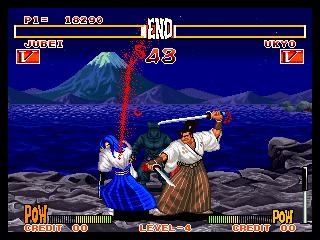 One of the weaker inclusions to the game in my opinion was Baseball Stars 2, this to me wasn't too much fun and was really samey. Hit the ball, computer runs for you, hit the ball computer runs for you, rinse repeat, so on so forth! It just seemed a tad boring. I also found the fact that you can't save midgame really frustrating, it's ok if you're sat at home playing but if you are on the move and you have to switch the console off and you're in the middle of a game you will lose your progress. The game looks nice though, with well designed character models and good graphics, but sadly this (to me) is not enough to save the game. 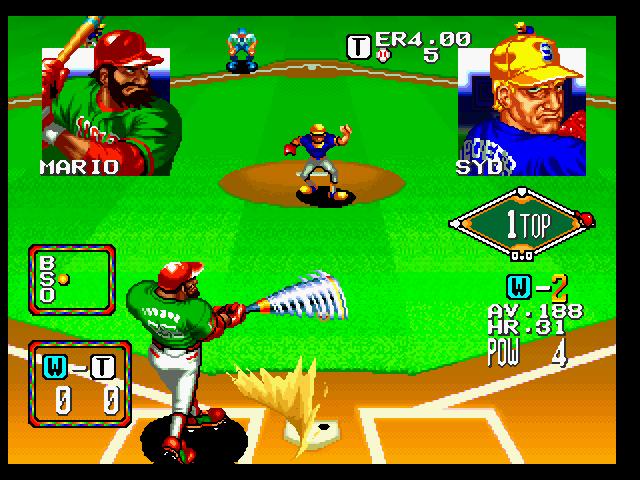 The game itself offers multiplayer Ad Hoc mode for every game which offers a lot of replay value, especially on the fighting games only problem being that it is not a game share game so both party's need a copy of the game before playing the multiplayer aspects.

Another nice inclusion is an achievement style system. There are specific goals you can aim for like completing a certain move with a player in one of the games unlocks the achievement. There are no points on offer, just bragging rights to your friends. I liked this because it gives you something to aim for in the game and gives it replay value because you want to get the achievements.

My only issue with this package as a whole is the stories from the games have seemingly been cut out. For example, none of the fighting games have a back story, like who's who and what they are fighting for exactly. It just chucks you straight in at character select. For me, having a story is important in a game. It doesn't necessarily have to be a novel but just a few sentences saying what on earth is going on. I found myself having to research the games and story's to find out. This is a massive disappointment and the games feel a bit hollow without them.

A good point about the game as a whole though is the transition from the Neo-Geo to PSP has been a good one. These games suit the pick up and play style the PSP is known for. The controls work well and don't feel wrong at any point and the graphics are lovely. I personally enjoyed this compilation. Some games more than others but then that's what having a mix of games is about. There is something on this game for everyone.

SNK Arcade Classics 1 is a compilation of SNK's biggest arcade hits, 16 in fact squeezed onto a UMD ideal for pick up and play gamers.