So Many Me Review

So Many Me is a sweet 2D puzzle platformer by Thai developers Extend Interactive. The game has been in development for 3 years with experimental demos here and there but finally made it to Steam this year on July 17th.

And I’ve got to say all their hard work didn’t go to waste.The game starts off with a cute little green guy called Filo. Filo is just minding his own business when the spirit of his ancestor “Asimov” comes out of nowhere, telling him he must save their world Xio. Filo unquestioningly accepts and comically begins his new adventure.

The gameplay is pretty simple in the first few stages; you need to collect Filo’s ark seeds which causes Filo to multiply into different clones of himself, named “Me’s”. He and his duplicates now have the ability to transform into a “stone me” which helps them jump across gaps, dodge enemies and to progress through to the next level.

As you advance further into the game you are given more abilities to solve puzzles like becoming a bouncing red ball to jump up to high places or a glowing white light to distract enemies.

You have three items to collect in each level; The ark seed which unlocks another unique “me” and artifacts to spend on perks and abilities. The third item you can collect are costumes to give each “me” a different look. Only the ark seeds are essential to help with puzzles and progress to the next level. Although I found in some cases you could just skip all the items and go to the next stage.

I will say the art style and puzzle layout of this game is very much like BattleBlock Theater. (I actually thought it was by the same company since they’re stupidly similar).I am a huge fan of BattleBlock Theater; probably due to the fact that makes me do an embarrassing cackle-laugh whenever I watch the cutscenes. But with So Many Me I haven’t laughed as much. The “me’s” often have weird silly dialogue with one another but rarely say anything laughable. This isn’t really an important aspect when playing this but if you’re planning on purchasing So Many Me because you like BattleBlock Theater just take that into consideration.

Now onto my experience! I’ve got to say, I’m hooked with this game.

The first thing with So Many Me that caught my eye is there isn't really a main menu for this game. It just sorta jumps you straight into the stage you were on last. It’s nothing refreshing or different but just something you don’t see that much.

I’m a big fan of puzzle games and I love the simple yet fun gameplay with So Many Me. A nice way to name this sort of game is “pleasant”.

But bear in mind this game may give you the impression that it’s meant to be for kids and isn’t all that hard. But honestly, I’ve found some of these puzzles very challenging, especially if you want to get all three items in each stage. I’m one of those people that likes to explore everywhere and obtain everything I come across, so I was almost ripping my hair out at one stage trying to figure out how to unlock some stupid door to get a costume for my newest “me”. 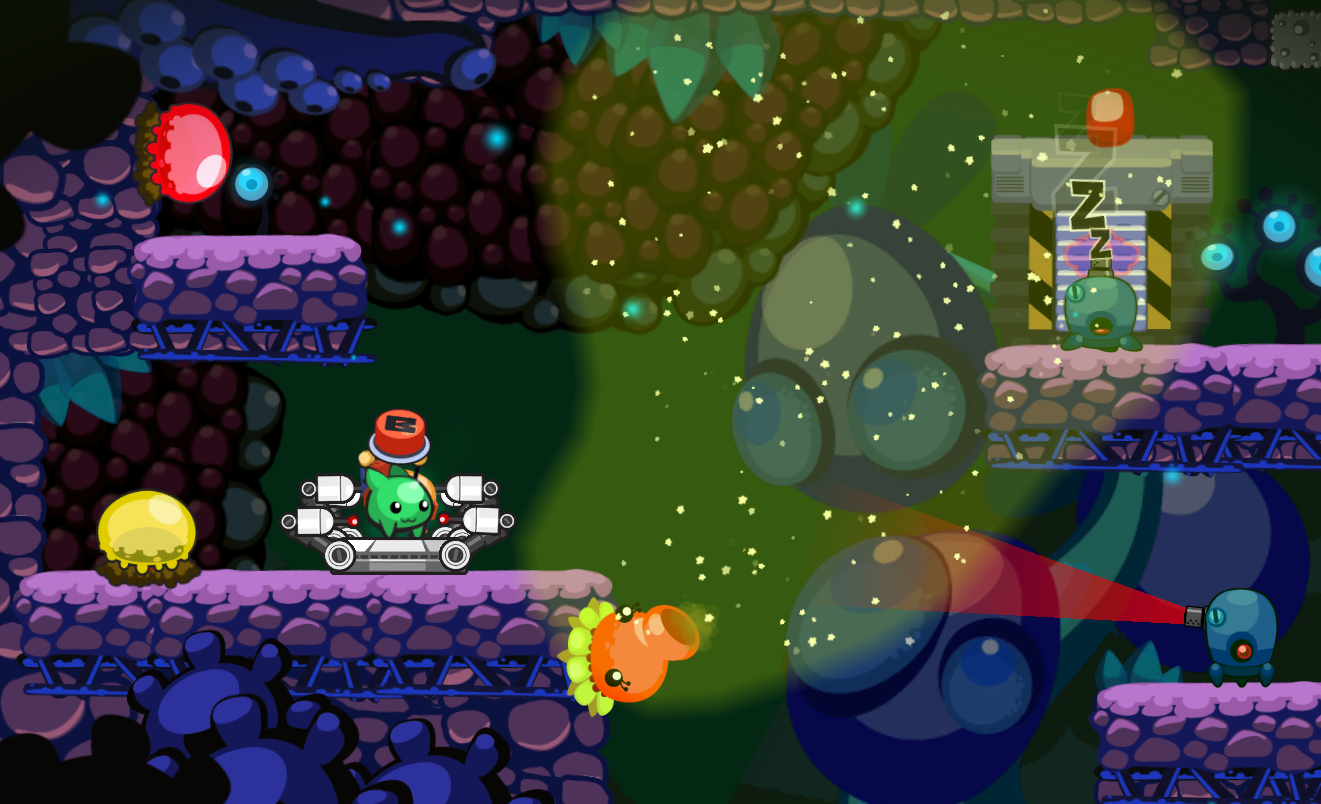 And because this games full version is still fairly new there are almost no walkthroughs on how to proceed through levels or to get any of the items.

Although if I’m going to be honest it’s much more satisfying figuring the puzzle out for myself.

This game isn’t really laid out to do certain stages/islands in order but the second boss I came across in the Outskirts stage I found stupidly difficult! I started to get motion sickness from chasing this cyborg contraption in a side scroller fashion like I was fighting Dr Robotnik. I must have been on this boss level for well over 20 minutes, I kept dying from not keeping up with the screen thus having to restart the boss fight all over again.

This brings up another issue I found while playing this.The game seems to often get confused with what's convenient for the player when they die and what isn’t. A lot of the time when I’d try to solve tricky puzzles and I’d die from an unsuccessful attempt, the game would either place me right in the spot before I died or place me all the way back on the other side of the map. It was a little frustrating and it was as if I’d have to have died in a certain place of the puzzle for me to get back to where I previously was. But with all that said this game is very addictive. And I never really got so annoyed with a puzzle that I’d stop playing it and rage quit. I’d at least try to finish the level I was stuck on.

What I like about these sort of games is you don’t need to listen to everything going on since there's no spoken dialogue. You can just play your favourite album in the background or put on that TV programme you’ve been meaning to watch whilst having a casual play. But for me in this case I found the music in this game peaceful and cute so most of the time I was engrossed with the pretty melodies of each level.

I should state I did play this with my PlayStation controller hooked up to the PC, as I’m more of a console gamer, and I found controlling Filo and Co very easy. I did attempt to use the keyboard, but to move you do have to use the arrows keys instead of WASD keys,  so I personally prefer using a controller.

But overall if cute puzzles are your thing I’d recommend this game highly. The story really isn’t anything to write home about, but it’s got a few laughs here and there. But I mainly enjoy the unique puzzle solving myself! Just be warned if you get frustrated easily you may swear at the screen a couple times, but that’s a given with any puzzle game. Also bare in mind there seems to be no sign of multiplayer at the moment. I’ve clocked 9 hours so far on So Many Me, and I don’t intend to stop playing any time soon!

So Many Me (Reviewed on Windows)

Overall if cute puzzles are your thing I’d recommend this game highly. The story really isn’t anything to write home about, but it’s got a few laughs here and there. But I mainly enjoy the unique puzzle solving myself! Just be warned if you get frustrated easily you may swear at the screen a couple times, but that’s a given with any puzzle game. Also bare in mind there seems to be no sign of multiplayer at the moment. I’ve clocked 9 hours so far on So Many Me, and I don’t intend to stop playing any time soon!

A twenty-something year old forever cursed with the face of a fifteen year old. Always content with a cuppa in hand.