Sonic has long been revered as one of gaming's most iconic figures. Star of the Sonic the Hedgehog platforming series which started out on the Sega Master System, the lightning fast, bright blue hedgehog blitzed his way through various successful games, three from the main series and a few offshoots like Sonic Spinball. Unfortunately after the Sega Master System / Mega Drive hay days, things took a turn for the worse and Sonic lost his sparkle. What happened to make such a popular series of games do such a nosedive in popularity? 3D was introduced, and so began a period of failed games that most Sonic the Hedgehog fans would like to forget. Games such as the Sonic Adventure series on the Dreamcast were initially well received, but their PS3 and Xbox 360 ports were not. Blasted by critics for being unplayable, issues with controls and camera angles were highlighted. This seemed to be the end of 3D Sonic games, something which the gaming community sighed a huge sigh of relief about. Until now that is.

Enter into the ring (pun intended), Sonic Colors. Taking place in an intergalactic amusement park created by none other than series antagonist, Dr Robotnik A.K.A Dr Eggman. Just as you suspect, Eggman hasn't decided to end his bid for world domination and take a step into the world of legit business, he is in fact using this amusement park as a cover for what he's really up to. Upping his game, Eggman is done kidnapping small animals and is this time going for aliens called Wisps. These aliens come in many different varieties, each one able to grant another being with their special power. As well as kidnapping them, Eggman has chained all their worlds to a space station in order to enslave them. 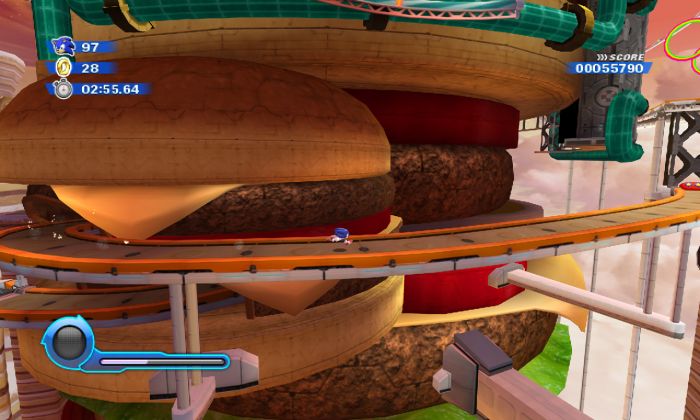 This is where you come in. As Sonic it's your job to teach Eggman a lesson.... again. As far as Sonic story lines go, this one isn't too bad. It's simple and basic and doesn't try to over-complicate things leaving you free to enjoy the awesomely fun game play.

This is where Sonic Colours immediately outshines its 3D predecessors. The gameplay is a lot of fun, gone are the clunky horrid controls of past, replaced with simplistic responsive controls. It's also your choice as to which control set you use as you can make use of the Wiimote, Wiimote + nunchuk, classic controller or the GameCube controller so the choice really is yours. These controls make the experience smooth, it makes Sonics dizzying speed and acrobatic ability - speeding down a hill, round a loop the loop and onto a grinding rail - that much more enjoyable as the action just flows with no frustrating unresponsive button inputs. 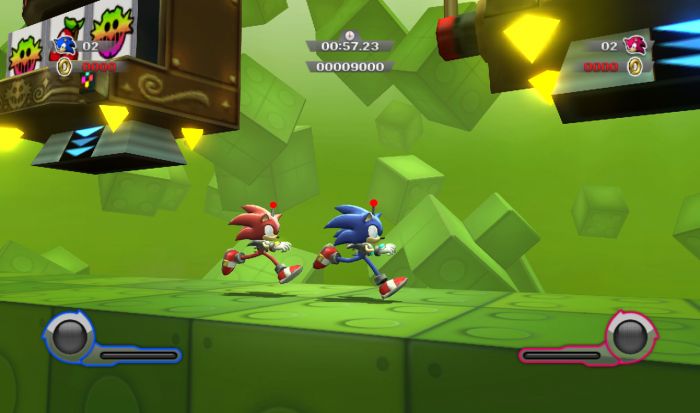 Gameplay is primarily set in 3D giving you a view of what is in front of you, and this works well. It doesn't stay completely in 3D though, as you leg it throughout the many varied and beautifully designed worlds, the game shifts back and forth between 2D and 3D seamlessly and gives you a more varied experience. Most of the platforming parts are in the 2D, and this works really well. The platforming sections are well thought out and well executed, offering you many different paths to complete each level. Some may be available straight away but others will need revisiting as you go through the game collecting more of the aliens known as Wisps.

As previously mentioned, the Wisps are able to imbue different powers upon someone of their choosing. Scattered throughout levels are capsules you walk into to collect, each one containing a Wisp of some description. Each coloured Wisp offers you different abilities, collect a yellow Wisp and you transform into a drill capable of whizzing around under the ground when the level allows. This particular power is usually used from the 2D viewpoint and comes into play in a level compiled completely of sweet treats! The drill form allows you to find secret paths below the main surface and collect items that you would normally have missed.

Another useful Wisp is the blue one, when collected these give you the ability to transform yourself into a very fast moving laser beam. With this you can rebound off certain surfaces allowing you to get higher than before or collect a seemingly impossible to reach string of golden rings. The Wisps are well implemented and are easy to use, one thrusting motion with the Wiimote activates these powers and there is usually an info point alongside the capsules which will explain how you use them. The Wisp powers add an extra layer to the game and enable you to access areas you wouldn't be able to normally, allowing you to collect more of the bonus red rings available in every level. Their inclusion in Sonic Colors add that extra bit of fun, and more variety to this platforming title.

The game has some really fantastically designed levels, from the bright lights of a casino inspired world to the cake shop delights of a bakery/sweet shop world. Each one full of detail, Sonic Colors is easily one of the nicest looking games available for the Wii. Equally impressive is the soundtrack, while the theme song is annoying, there's no denying its effectiveness at complementing the games happy and bouncy atmosphere. Unfortunately though, Sonic and Tails are voice acted. This brings about all kinds of cheesy dialog which is pretty cringe worthy at times, but hey, you can skip cut-scenes so you don't have to listen to it if you really don't want to.

So far Sonic Colors seems to be an all round decent package, but unfortunately it's not without its faults, the biggest of which is the co-op system. The speed and pacing of the levels twinned with the precision needed to make it through specific platforming areas make the game nigh on impossible to play with two people fighting over the camera. It makes it difficult and frustrating when one player gets through a series of platforms only to have the other player knock them off through dodgy camera angles or crashing into them at a high speed. Overall, Sonic Colors is definitely one of - if not the best - 3D attempts at making a Sonic game and arguably the best Sonic game on the Wii full stop. Its fast paced gameplay will appeal to fans of the older series entries and the added gameplay element of the Wisps will maybe entice new gamers to the series. With the only downfalls really being the co-op gameplay and voice acting, there is nothing that should stop you having a go at this one if you are a fan of the series.

Sonic has long been revered as one of gaming's most iconic figures. Star of the Sonic the Hedgehog platforming series which started out on the Sega Master System, the lightning fast, bright blue hedgehog blitzed his way through various successful games, 3 from the main series and a few offshoots like Sonic Spinball.

Seems to be a problem

Hmmm that's strange :S I can see it and so can Wedge.