Pioneers are the daring trailblazers of humanity. Every town, city and nation was born from a handful of these brave individuals; inventions like the wheel, running water and the iPhone owe their existence to their creative pioneer spirit. Vivid Games’ Space Pioneer, it’s safe to say, doesn’t promise the same world-changing level of innovation, but can it at least offer a worthwhile distraction for a bargain price? Playing as a space-faring, alien blasting mercenary is certainly a good way to get players interested, but let’s find out if this title has the gameplay chops to keep them coming back...

There’s something to be said about a game that knows when to spare players of unnecessary plot. Sometimes people just want to load up a game, shoot stuff and chill out; Space Pioneer is very much one of those games. What little plot there is can almost be completely missed by glancing at your phone for too long during the opening cutscene. All you need to know can be summed up in one sentence: Interplanetary colonisation companies need well-armed mercenaries to kill hostile aliens and run errands in dangerous territory, you (and your friends, this can be played co-op too) are those mercenaries. Pretty simple, right? There is a Big Bad “main” villain established in the opening minutes that will be fought at the end, but you’d be forgiven for forgetting all about it: the game seems to for 95% of its duration.

With story as an afterthought, it stands to reason that the developer’s efforts must have been fully-focused on gameplay. While this is true, it doesn’t necessarily mean the gameplay is anything to write home about: Space Pioneer is a simplistic twin-stick shooter that puts players in a variety of arena-based, interplanetary levels and asks them to complete simple objectives while being bombarded with the planet’s hostile native species. Each mission is randomly generated and technically unique, but there are only really four planet “skins” (jungle, desert, icy and lava-y) and a handful of layout types. Suffice to say, there may as well only be four levels.

The stage’s objectives also tend to blur together: whether the aim is to plant a bomb, repair a spaceship or set up some piece of tech, success is usually achieved by waiting in a marked area, fighting off enemies and waiting for a progress bar to fill up. This repetitive level format can really start to grate on a player’s patience, especially with costly upgrades that eventually necessitate the re-playing of levels (more on that later, however). With that said, the stages are generally short enough to avoid outstaying their welcome —great for quick gaming sessions. It’s worth mentioning that each stage has three semi-optional, performance-based objectives: these ask that the player fulfil requirements like completing the mission in a set time limit, using a specific weapon or staying above a certain level of health throughout. I describe these as semi-optional because a certain number of them will need to be completed to unlock future levels; they also do a good job at encouraging a player to branch out into different gameplay styles. Overall the optional objectives are a simple but positive addition to the game’s structure.

Let’s not kid ourselves here though, the aim of each level —really— is to shoot stuff, not complete objectives. Thankfully, this is the game’s strength: enemies don’t swarm the player in huge numbers, but they take enough damage and hand it out quickly enough to feel like a substantial threat. Constantly moving is the key to avoiding death; staying still will swiftly leave Pioneer entrails smeared over the planet’s surface like strawberry jam on toast. Gameplay variety is also significantly aided by the sheer quantity of different weapons, deployable gadgets and abilities unlocked as players level up (there is an XP system in play): turrets, grenades, dashes, buffs, traditional guns and space-age guns bulk out the roster and each feel like a viable option for efficiently dispatching enemies. There’s no getting past the fact that Space Pioneer is still a relatively simple twin-stick shooter, but as far as that genre goes, this one’s a pretty good time. While not boasting any serious depth in most respects, Space Pioneer has a surprisingly complex upgrade system that, unfortunately, seems to have been improperly translated from mobile to console. What can only be described as “upgrade tokens” are unlocked by completing missions and challenges. These tokens correspond to a specific piece of equipment and allow the player to spend their gold on upgrading that piece of equipment. Early upgrades require minimal amounts of gold and even fewer tokens, but these requirements soon rise to unreasonably high levels. Tokens are never in short supply; players will eventually become overwhelmed with the amount of available upgrades, unfortunately the paltry amount of gold awarded in-game means that a tiny amount of these upgrades will ever be acquired. I can only assume that, in the original mobile version of Space Pioneer, gold was given in such measly quantities during gameplay because of its availability in microtransactions. The console version —thankfully— is free from similar microtransactions, however the traditional gold rewards have not been improved, meaning that the vast majority of the game’s upgrades are unattainable without hours upon hours of grinding. 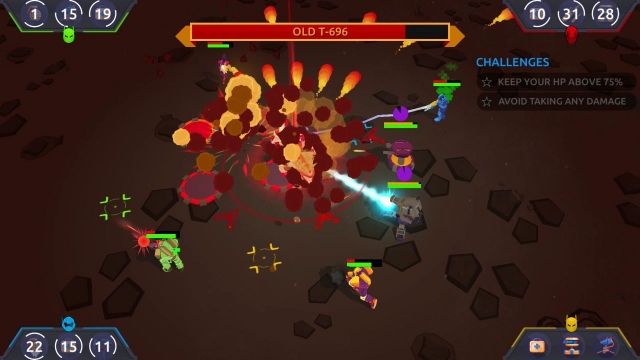 Space Pioneer, at its core, is an entertaining twin-stick shooter that offers a fantastic amount of player choice regarding weaponry, equipment and abilities. It doesn’t get bogged down in needless plot: offering a brief setup, guns and stuff to shoot is all that’s needed with a title like this. Make no mistake: there’s nothing particularly special about the gameplay on offer, but for such a low price the gameplay more than holds up its end of the bargain. Unfortunately, some errors have been made with translating the game from mobile platforms to the Nintendo Switch, essentially breaking the upgrade system as the game progresses. This glaring issue, combined with a lack of level variety, significantly weakens Space Pioneer as an overall package and —frankly— leaves it feeling unfinished.

At £8.99, it’s not asking for much money, but it’s certainly asking for too much of a player’s time with the excessive and repetitive grinding.