Have you ever wondered what Super Meat Boy would play like if it mixed in the gel elements of Portal 2 and the water spraying of Super Mario Sunshine? Splasher gives you a pretty good idea of what that would be. Is it any good though? 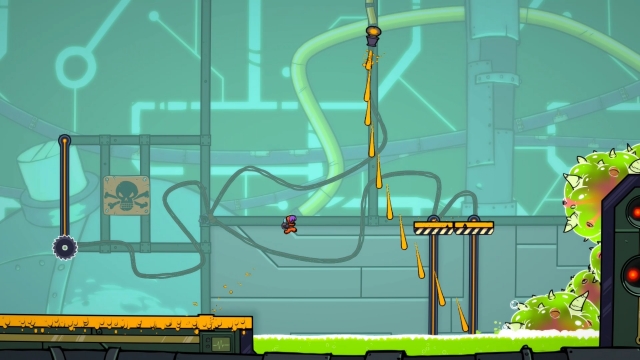 On the surface Splasher has a pleasant, if generic, look about it. Bright colours in a thickly outlined art-style belie the cleverly devious level design beneath it. It’s a platformer in the Super Meat Boy mould, tight controls and simple-looking but challenging levels are the order of the day here.

Splasher’s twist on the genre is its spraying mechanic which sees you armed with a variety of liquids. The levels are filled with hoses and other items spewing a variety of coloured inks that react in different ways. Red for instance is sticky and slows you whilst also allowing you to stick to walls and ceilings and yellow acts as a rubber-like substance causing you to bound uncontrollably. 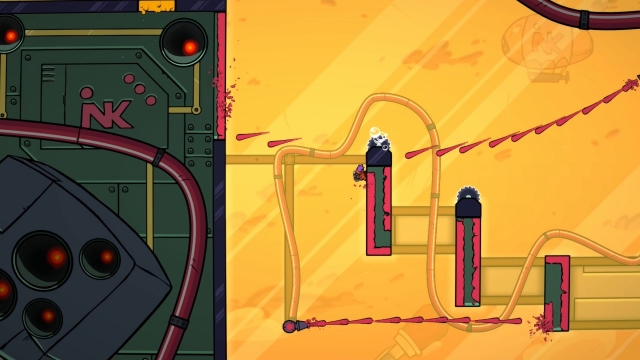 Early on you are given a spraying device allowing you to get in on the spraying action. Initially restricting you to water which acts as a way to remove the other substances as well as a way of powering platforms and destroying enemies. Throughout the course of the game new substances are unlocked for your use.

This allows the clever level design to reveal itself. Introducing the liquid’s abilities in a natural environment before arming you with the ability to spurt colour everywhere. Before throwing you into levels where you need to specifically place patches of each substance to progress. 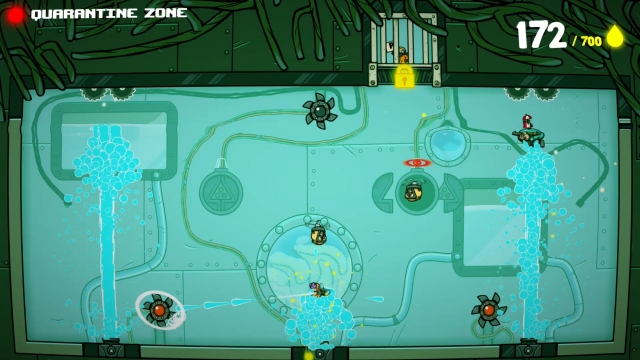 Throughout each stage are workers to rescue that spell out the word “SPLASH!”, often tied to challenge rooms dotted within the level with the final worker being tied to earning enough gold ink. Killing enemies, washing it off the level and finding golden machinery awards you with this substance, allowing you to free the final pleading worker in a stage.

Your reward for doing so is unlocking the stage for Time Trial play. The game has a few modes of play, standard mode, a time trial mode and a speedrun mode. This gives the game plenty of replayability and there is already quite a lot of game here.

Make no mistake though, the game gets pretty tricky with how it combines your abilities and it doesn’t quite have the immediacy of Super Meat Boy’s instant restart mechanism, instead relying on checkpoints throughout the stages. This does lead to moments of frustration in specific areas especially after replaying prior sections only to die again.

All told, if you are after a challenging, fun platformer with an interesting central concept you will get some mileage out of Splasher. Just don’t get too attached to your hair!

A challenging, sometimes punishing platformer that blends a unique hook and fun movement with clever level design that is well worth a look. Don’t let the innocent appearance fool you.