Squish and the Corrupted Crystal Review

It isn’t very often that I play a game that doesn’t want to be played, but Squish and the Corrupted Crystal gives me that impression. Over the course of the hour I played the game, I struggled through about 20% of it before it just became so unfairly punishing that I felt I was wasting my time. I can’t be sure if the game was designed like this intentionally or if there is just a distinct lack of experience in platform level design.

Right off the bat, the menu system is awful. I’m not sure what it was designed to be used with, but I used two different controllers, and a keyboard and mouse and nothing felt like it was working properly. There is no mouse function, and using the arrows or directional stick barely seems to work. Selecting a menu item is equally random, and don’t get me started on rebinding the controls - an almost necessary process.

The controls make no sense to me at all. The jump button works differently each time I press it, and the sprint button is on the left bumper on controllers and wasn’t bound to the keyboard at all. The sprint makes you jump further, but that distance changed each time I used it. There’s a form change on the right trigger, and all of the rest of the buttons are unused and forgotten. If you want to rebind, be careful how you do that because those controls are hard coded into the game, so I ended up with three sprint buttons and two jump buttons - I’m not even sure how that’s even possible. 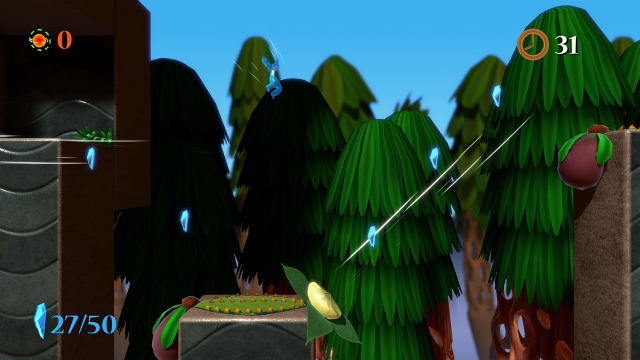 Squish’s levels themselves are rather short affairs, but they take a lot longer than they really need to because of how badly they’ve been designed. The best instance I found to demonstrate this is a section where you need to hold left to travel through a pipe, and then immediately switch to holding right so you can begin a wall climb. That sounds simple enough, but the controls don’t respond fast enough and failure involves dropping off the map.

Enemies are littered around the levels and the first tutorial teaches you to jump on the heads of enemies - the same as every single platforming game that has ever been made. Except, that only works on one enemy type that only knock you back on contact. Every other enemy kills on contact and cannot take damage, but the tutorial never tells you that and these enemies are everywhere that you need to jump. Usually placed off-screen, they’ll be in your way about 50% of the time, and the other 50% of the time they’ll kill you as you make the jump and they walk into you.

The final straw for me came in a level that has spikes form on surfaces you touch. These spikes one hit kill, and because of how inaccurate the jumping mechanics are I spent about ten minutes making exactly no progress. The game was wasting my time and I wasn’t enjoying any of it. Squish and the Corrupted Crystal is an exercise in seeing how not to design a side-scrolling platformer. From awful controls to terribly laid out levels, Squish consistently made me want to not play it anymore, and it made me feel like it didn’t want me to play it anymore either. I think that if the controls were tighter it would make the game less frustrating, but when the controls don’t even work on the main menu, I think that might be a big ask.

Squish and the Corrupted Crystal (Reviewed on Windows)

A game with awful controls and sections that punish you with unpredictability and unreliability.

But with three sprint buttons that 3x the speed!

If only! If I moved as fast as that, I might have been able to skip over the frustrating parts of the levels!

I'm sure games with borked control schemes are purposely designed to sell replacement controllers, after you've smashed your existing controller to pieces with a claw hammer in a fit of rage-fuelled frustration.

It's a good job I can keep a level head, I don't really want to fork out for another steam controller...

Squish and the Corrupted Crystal