Once you’ve played Star Vikings for the first time, you won’t be able to think about the game without singing the main menu soundtrack – a cheesy kind of hard-rock that embodies the perfect mix of the themes of space and Vikings in the first few seconds of the song. It is a type of rock which would have made KISS themselves jealous of the self-mockery imbued in each verse. And that’s because the band is a perfect analogy to describe how Star Vikings plays: light-hearted, fun, and always aware of the ridiculousness of their looks.

As it’s commonly known, there’s only one way to Valhalla – war. Star Vikings are well aware of this and embrace this path to the fullest, taking it to intergalactic dimensions against space snails. Needless to say, these colourful snails can talk and are the size of our soon-to-be-victorious Vikings. However, that doesn’t make them a threat – it’s the captain ship’s stubbornness and thirst for blood that prompts this war, as these aliens only wanted a native idol they worship back. According to the Viking view, this idol is of a better use as a brace for a wobbly table. And understandably, this is casus belli to release the dogs of war and summon your allied Viking banner men – in this case, a fellow crew member wielding a power armour. 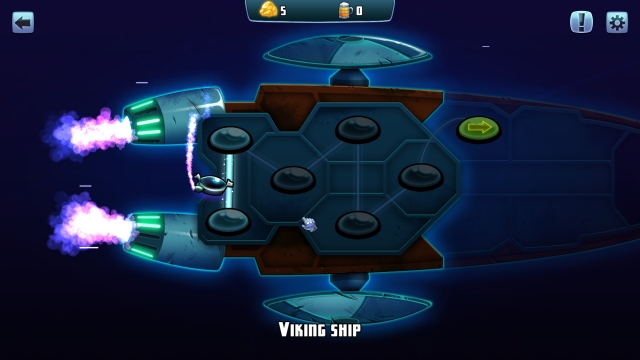 Despite the proven brutality and obstinacy of our dear bearded protagonists, Star Vikings is a puzzle at its core. The easiest comparison would be chess: it’s a grid where each piece has a different ability. For example, our armoured companion has a lot of health and the ability to push enemies to nearby tiles. Thor has less life, but can shoot Star Viking lasers to enemies in any part of the grid. To use special abilities, your Vikings use energy, a currency that is replenished at every new stage in each level, unlike your own life points. As you progress, your roster will expanded with new characters, and with abilities you have to tactically synergise to complete your objectives.

Objectives vary in each level, from completing a number of stages without dying or killing a determinate number of enemies. In order to do so, not only will you have the aforementioned special abilities, but you can also use potions and boosts for your character. For every defeated enemy and stage completed, your characters will gain experience, eventually levelling up and enhancing their armour and abilities. The enemies daring to get in your way will vary accordingly, with more health, more unpredictable combinations and more punishing abilities – as it tends to happen in games, you know? 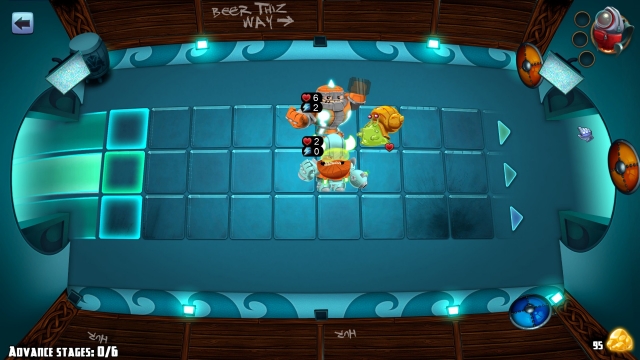 It’s like an added mini RPG on top of the tactics game, on top of the puzzle game. And all of them have this carefree, upbeat, made-for-mobile type of approach that never delves deep into any of its aspects. You can never go wrong with any unlockable ability, meaning that those decisions are not really crucial. Synergising your team gives you the yummiest rewards, but just like the extra Flake on your ice-cream, you’ll probably do alright without them. It becomes a game where the challenge is not beating a level, but collecting as many boosts in the process as you can, and then beat the next one even more comfortably.

You could say these issues were foreshadowed by cartoony design of its characters and their lack of depth. Or even by that silly hard rock song from the menu, which is followed by a playful plucked melody during the campaign. This game is kid-friendly and easy to pop in and out. The tricks and abilities aren’t imaginative enough to create crazy combos, or to resort to deeper tactics – Star Vikings is just there to let you have fun for the span of a short session. Probably the mobile-friendly design pushed the game towards a more casual design. And it works; but as far as casual goes, it fills no niche and does nothing exceptionally well or bad.

Puzzles and Vikings make up for a mildly funny and mildly challenging experience, but still miles away from worth your enthusiasm.