As you would expect in most games, the title says it all and this is no exception.

This is the 3rd Star Wars game in the Battlefront series and most things haven’t changed that much since the first. Same control and game play with the improvements of the second and more to boot. 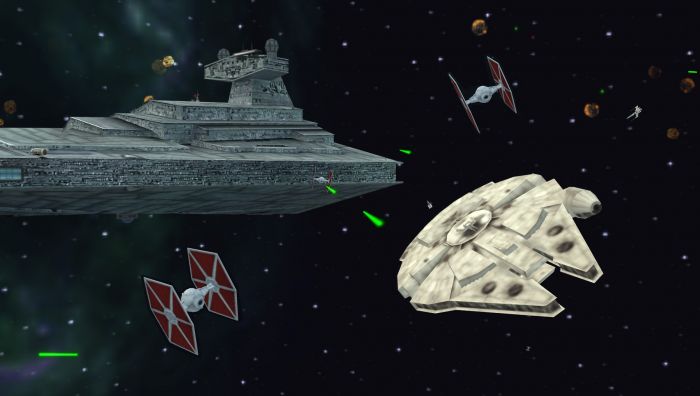 The big difference about this is that it’s only for the PSP, and to me its adaptation of the original Battlefront game and its exclusiveness to the PSP make it an ideal buy for those into Star Wars and this genre. True there are bigger and better third person shooters out there like its main rival, the Battlefield series, but only a small portion of those are on the PSP.

There are also several ways you can play, “Instant Action”, “Campaign”, “Multi-Player” and “Galactic Conquest”.

Instant action drops you into one of the many different land or space battles that are available, the Campaign allows you to play through the story as one of the forgotten hero’s of Renegade Squadron, Multi-player allows you to play against/with friends and Galactic Conquest pit’s your strategic skills against the AI in a planet by planet chess game. 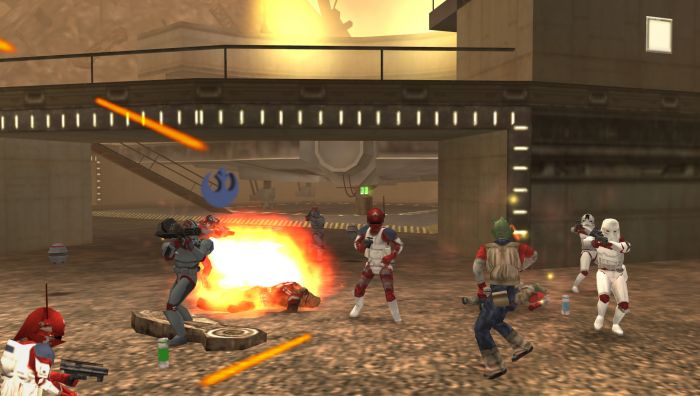 All these are the same as the two previous Battlefront games, but scaled down to accommodate the limited capabilities of the PSP. In the hours that I have spent playing (yes, you’ll spend hours) I have yet had to stop mid battle to wait for a map to load, or the PSP to catch up with what I was asking to do (as you sometimes get in high speed action games). The game play is smooth and easy to control and the only problem I ever encountered was my PSP battery running out on me, but once recharged the PSP started exactly where it left off (even in mid-battle!).

The big change over this game than its predecessors is its ability to customize you character, before you were stuck with a class of solder and nothing could be changed. Now you can have a wookie sniper, a rocket wheeling clone or even a droid pyrotechnic. Every character has about 10 different looks, with multiple color options for the outfits and personal insignias.

The payload is also customizable, but limited so you can’t have every powerful weapon available. You’re given 100 credits and can choose your payload from it, with each item costing credits appropriate to its abilities. You can choose primary and secondary main weapons, primary and secondary alternate weapons, upgrade your health, speed, stamina and even capture speed. The combinations are best suited for what you need to take out, and all can be changed mid battle at a capture point. 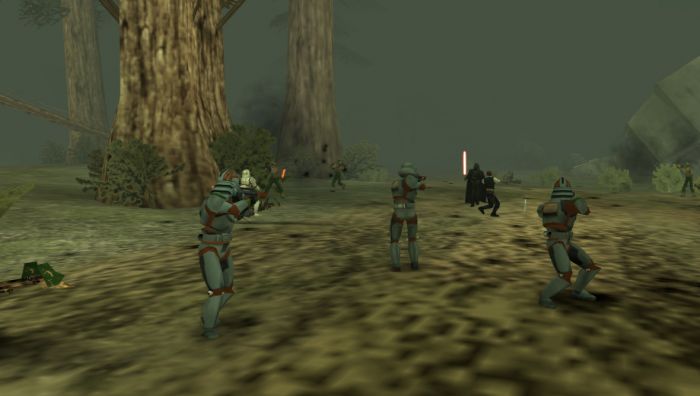 The best tip is to play through the campaign, it gives you hints and tips on how to get the best out of the game, like holding the right shoulder button down the get a better accuracy lock on your opponent, or combinations of buttons and direction to avoid the torpedo’s in the space battles.

Each map can be played in different ways to win, either kill all the opponents, taking control of all the capture points, destroying key systems (space battle – destroy the key systems of the opposing mother ship) or retrieve an object (Campaign).

The ‘ticket’ load out or the game can also vary, ticket being either the number of players your opponent has, and this can again vary depending on what mode your playing and how difficult you want the battle.

There are so many little niches about this game that it would take a long time to explain them all, the best way is to get the game and try it for yourself. The PSP is available as a normal game would, but if your lucky you could get a limited supply ‘White’ slim PSP (complete with Vader decals), for the real geek in you.

As you would expect in most games, the title says it all and this is no exception.This is the 3rd Star Wars game in the Battlefront series and most things haven’t changed that much since the first. Same control and game play with the improvements of the second and more to boot.

EA Giving Discounts of up to 100% on Origin