If you’ve been hiding under a rock in a galaxy far far away, or blanking out when those pesky TV adverts have been on (I’ve been known to do that sometimes), then you’ll not know about the latest Star Wars game from Lucas Arts. 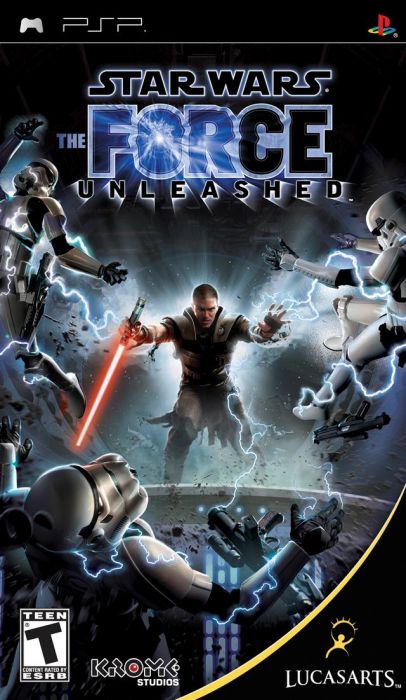 Oh no, not another Star Wars game!

This one is slightly different from all the rest. Granted it’s based in the Star Wars Universe and you do play a force wielding character, but that’s where the similarities end. For “Star Wars: The Force Unleashed” is all about Darth Vader’s secret apprentice, trained to be a Sith and tasked with killing the remaining Jedi in the Galaxy.

The game is based between “Revenge of the Sith” and “A New Hope”, where Lord Vader is tracking down the remaining Jedi. And without spoiling too much of the story and the game, your character is the one killing the remaining Jedi (and minions!).

Similar to most games out on the market, the beginning level allows you to get a taste of a fully built character, Vader. You’re then given the main character, Starkiller, and have to learn how to use and build up his skill. The difference with this game from most is that instead of starting off good, and then given a choice to stay good or turn bad, “Star Wars: The Force Unleashed” starts you off on the bad side of the force.


How does it play on my PSP?

Hardware wise, having only the PSP1001 (see “Console Review: Sony PSP” for further information) it becomes apparent that this game has been designed for the PSP2001 and PSP3000 models, as they have more RAM and faster loading times.

The controls are easy to use and the game actually helps you to complete the missions by displaying the keys needed. As already stated though, the loading time is extensive for a PSP game and can get tiresome in-between levels or at key points when short video clips are used.

The graphics are what you would expect from LucasArts; nothing short of spectacular. If you’ve seen the trailers (Here are a few) and the TV spots, the game looks exactly like a real movie. There’s force power energy, lightning strikes and realistic looking troopers.

The sound score and movie scenes look like they were taken right out of the films, as well. However, due to the loading times, and sometimes freezing of the game to load a new level, the scenes do become a bit unfocused and the sound does chop up at times.

Don’t let all of this deter you from playing the game. You really feel like you’re in the middle of a battle with troopers fighting and flying left and right, Jedi and Sith fighting to the death and even the occasional screaming Wookie!

Well, it’s primarily a 3rd person battle game with the camera focus being automatic and always shows you what your character is looking at. This can be annoying when trying to look for hidden items, but it works well when doing battle.

Sometimes; however, it does change to a platform style, giving you a 3D environment to battle bosses with. This can work to your advantage as you’re able to see the entire arena and know where the health and other bonuses are (and you’re going to need them). 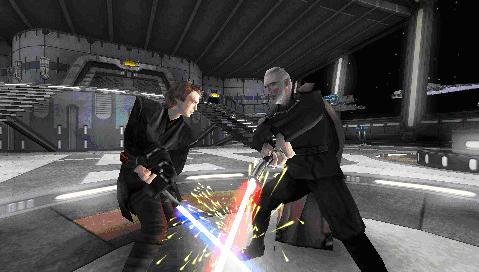 I want to jump in and fight, what are the game modes?

Well, for those wanting a quick battle there is the “Forced Unleashed” mode, giving you access to “Duels”, “Ancient Battles” and even “Order 66”, while choosing from a list of characters and using the force moves you’ve unlocked in the “Story Mode”. The other mode is obviously the “Story Mode”, where you can become the apprentice and find and fight the scattered Jedi around the Galaxy. As you progress through the game, you can pick up Health boosters and Force boosters (increase your available Health and Force). You can also pick up lightsaber crystals and hilts, using them to change your saber (if you so wish!).

Unfortunately for the PSP version however, there is no multi-player mode meaning that you can’t challenge friends to a duel. Other versions like the Wii and PS3 do have this mode but it is believed that the PSP has additional content and a slightly different storyline.

The “Story Mode” bonuses are called Holocubes. These are not required to complete the game, but give you a bonus insight into the artwork and rendering that made the game possible. But as the game has only just been released, it is uncertain if collecting all of the above gives you further levels or characters in the game.

You can also unlock some arenas and characters as you complete the “Forced Unleashed” section. For example, a set amount of Duels won will give you a new character, or completing “Order 66” will grant you a new arena. Some of these are stated within the game but it’s uncertain if all of them are stated.

And with this being the PSP version, some of the “Story Mode” and “Force Unleashed” sections are unique and can not be found on any other platform. Thus it would seem that each platform has its own uniqueness to the game.


Is it Fun the play?

Oh yes, for those who know the Star Wars universe will know about the Jedi powers, which are the key to this game. Not only can you perform the classic choking of an opponent, but electrocute them as well. There’s also the Force push, pull and slam them into objects and walls (not to mention slamming objects into them!). 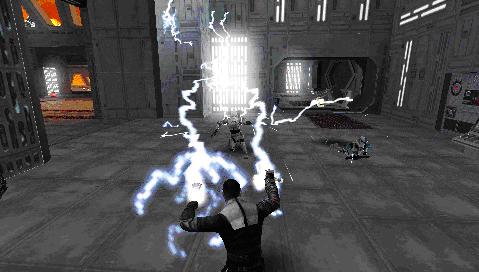 But the new addition to the force powers is the repel, which does a spherical push of anything around your character (up, down, left, right, front and back force push all at the same time). With the controls of the PSP, a quick version of this is easy to do and can get you out of tight spots, but you can also perform a force charge and release a giant version of this, knocking a shockwave of energy on all directions. This can be powerful enough to kill opponents on one go.

There are also set moves that you can perform like, combining saber fighting with force powers, or throwing your saber at opponents at key moments and pinning them against a wall. Either way there is a lot of ways to disperse the enemy. Stories have been heard of players simply electrocuting their way through the game, other have been said to simply throw opponents out off the gaming area. There are no penalties for the way you fight so you can be as gentle, or as mean as you like (you are supposed to be a Sith remember!).

Quite simply put, Star Wars: The Force Unleashed is another well put together game from LucasArts. It brings about a new perception to force powers, allowing the player to experience a side of the Star Wars Galaxy that has never been seen before. It does have some ups and downs, but overall it is a worthwhile game for the PSP and any Star Wars fan.

If you’ve been hiding under a rock in a galaxy far far away, or blanking out when those pesky TV adverts have been on (I’ve been known to do that sometimes), then you’ll not know about the latest Star Wars game from Lucas Arts. &nbsp;

A Trip Down LucasArts Lane

Been playing this for 2 days now, and agree with your review, it really is a nice game. For the record im playing on a PSP2003 and find load times to be very acceptable, no more than other titles today. It does have its painfull moments where the camera just doesnt quite keep up with the fast paced saber battles leaving you spamming saber attacks in mad circles hoping to hit someone :D Can kill the immersion feeling in some of the more epic battles with large groups of enemies, but in smaller and one on one fights there is a target lock feature to help prevent this clumsyness. All in all its a good buy for any Star Wars fan or just someone wanting a bit more action on their PSP! Nice review m8