The best Star Trek captain was Sisko, don’t @ me. Not only was he Captain/Commander of the DS9 space station, but he was Emissary of the Prophets AND he helped defeat the Borg at the battle of Wolf 359. Now, I’m far too white and nerdy to ever be as cool as Avery Brooks’ most famous character, but I can damn well try to replicate his achievements by tackling Starport Delta.

Cloudfire Studios’ debit title is essentially SimCity but in space and with hexagons. Your task is to create the biggest and best space station that you can, without managing to go bust or get destroyed in the process. This is a little bit trickier than it sounds however with the addition of pirate ships, who will try and destroy your base; space worms, who will eat bits of it; and meteors, which fall from the sky as meteors are wont to do. 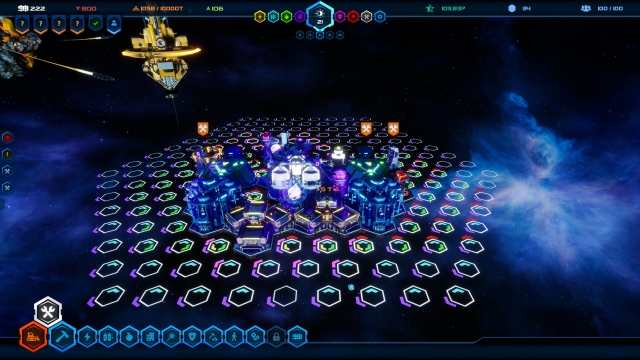 The main meat and potatoes of Starport Delta is the sandbox mode. This allows you to do what you want with your station, although a few generalised objectives like “make x money” are thrown in for good measure. There’s a brief tutorial that gives you the absolute basics of the game, and an eight mission campaign mode, which is the real tutorial to be honest. These are quite fun, but some of the objectives are rather tight and only have a fine margin of error allowed. This means that a lot of trial and error ensues as you try to work out exactly what solution the developers had in mind for this scenario.

The game proudly describes itself as “a space station builder where players must balance resources, station maintenance and resident requirements” so I was expecting something quite in-depth. Unfortunately this is less Babylon 5 and more Thunderbird 5. There is the balance of resources, but this essentially means “wait until you’ve earned enough money to build what you want”. There is station maintenance, but it consists of two clicks, and even less if you install automated repair drones. There isn’t really anything in the way of resident requirements to speak of. There’s one amenity in the game for residents which is a garden, and this doesn’t affect the residents directly, it just makes them move into your housing quicker. 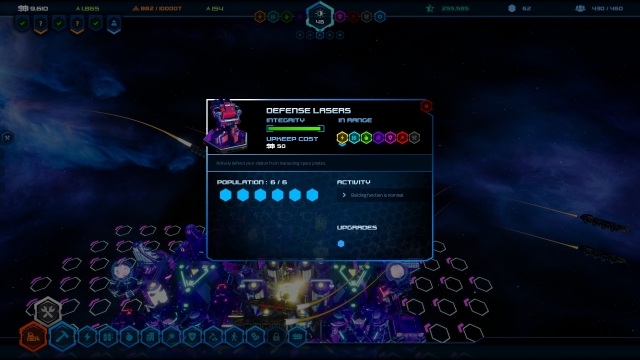 With this sort of game, the depth of options is what can make or break it, and sadly it’s the latter in this case. It feels less like a city builder and more like a tower defense game with resource management. There’s only two things you can do to make money: build housing and collect taxes, and trade mining materials. As you need to use those mining materials to make buildings and the amount you get per mine is quite low, it’s not a hugely cost-efficient way of making money, so it’s more likely you will just keep building houses and filling them up. Then it’s just a case of building shields and lasers to protect your building and repeating the process. 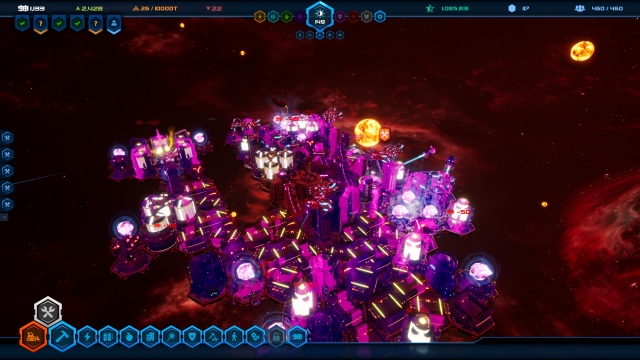 All buildings bar power stations need oxygen and power, and housing also needs a farm. These work on an area of effect, so everything needs to be close to each other. It’s not like in games such as Cities Skylines where you can build a power station and then connect everything with cables, you just have to have everything near to everything else. This severely hampers how you can design your space station, and it’s very difficult to leave room for future expansion, especially as upgrading buildings is only done by plonking three of them in a triangle. To further compound matters, all buildings have to touch another. You won’t start with enough money to build the larger buildings from the outset, and the area of effect on the smaller ones is too small to leave room to expand later, so the only real option is to start with a relatively inefficient core and then upgrade later by knocking down the stuff you built initially.

Upgrading is a slow process too, as you will often find yourself simply sitting on a profit to build up enough of a warchest to upgrade. Mining in particular is a laborious process, with a low rate of return and a high cost to run the mines. If you run out of money then the game starts selling off your assets too, which usually results in your income reducing further and starting a downward spiral you can only resolve by demolishing a load of buildings. This means that a lot of time is just spent waiting for your bank balance to get high enough to build something. This is sometimes sporadic too, with the game telling you that your daily profit is in the thousands, but your balance still dropping low enough for buildings to get demolished. Cash flow is not symmetrical, so it’s too risky to not keep savings on hand.

If this was an early-access game then I might forgive the shallowness of it, but at the time of writing, Starport Delta has already had eight incremental updates. It’s a shame as it looks absolutely lovely and there’s clearly a lot of passion from the small, two-man team behind the game, but there’s just not enough of it for me to justify giving it a high score. There’s no overview of incomings and outgoings, no needs and wants for your populace or any jobs for them to do, no diplomacy other than choosing to trade goods for money or vice versa. Nothing in the game feels alive in the way that other simulators do. I really wanted to like this game, but there’s just not enough of it.

A space station builder with very little to build. It’s a great concept but it’s just not well executed enough and it’s too shallow to be the game it deserves to be.