This generation has seen a plethora of great zombie games, with Left 4 Dead, Dead Rising and The Walking Dead offering a variety of takes on the simple concept of an undead apocalypse. Soon to join such esteemed titles is State of Decay, the newest Xbox Live Arcade release from Undead Labs.

State of Decay is an open-world survival horror game that emphasises survival in a way that is rarely seen in the genre. Resource management is a core gameplay mechanic; players must gather a variety of essential items, from ammunition and medicine to building materials and fuel. Many of the missions are centred around fostering relationships with fellow survivors and trading supplies with them, which creates a nice feeling of cooperation and community, as does the focus on interpersonal relationships within your group. Your base must be looked after with occasional upgrades and must be protected from periodic attacks from zombie hordes in order to keep the group content. The happiness of your fellow survivors is measured with a Morale Meter, which depletes as members become scared, angry or sad, a feature which offers a clear visual indicator of how well you’re playing in general. Combat is what many survival horror fans would consider to be ideal, by which I mean that it’s not particularly good. Melee combat is clunky, difficult and weapons break after a set number of uses. While guns are more powerful, aiming them is tricky, they take a good while to reload and their noise, if unsuppressed by a rare rudimentary silencer, will usually attract further hordes, making gunplay an impractical last resort, at best. It’s usually possible to use the somewhat basic stealth mechanics to hide from hordes while out in the open, but many of the missions are focused solely on combat, forcing them to indulge its lacklustre mechanics frequently and extensively.

Luckily, however, the combat is simply very fun. Like many features in State of Decay, when evaluated from a coldly critical standpoint, the combat should appear irritating and sub-par. In practice, however, it’s utterly engrossing and highly enjoyable. Despite the severely repetitive nature of the missions, hacking through a horde of zombies with a sledgehammer never stops being intensely satisfying, even after multiple hours of continuous play.

One feature for which I was not prepared is the game’s roguelike nature. Upon death, each character dies permanently and leaves their belongings for another survivor to collect, while the rest of the group mourns their passing back at the base. This goes a long way to establishing high stakes and a sense of tension rarely seen in modern horror games. One of my biggest complaints about Resident Evil and Dead Space is the fact characters consistently remain unharmed due to their plot significance, and State of Decay seems to have learned from these mistakes by making every character expendable. No-one is safe, anyone can die forever on even the simplest of fetch quests, ensuring that the player is vigilant and careful on missions, relieved and elated after a close call and devastated after a character dies. It’s extremely effective and highly commendable. 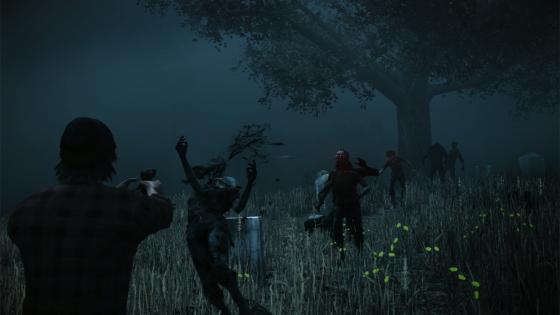 One feature that isn’t quite as good is that players will constantly need to return home and rest, choosing another survivor to play as once their current character becomes tired or injured. Although this does contribute to the sense of community prevalent in State of Decay, there are no discernible differences between the characters and their play styles, turning what could have been a refreshing way to spice up gameplay into additional laborious inventory management and trips back to base that break up the flow of gameplay. However, these return trips do offer clear stopping points a la GTA, and should appeal to those looking to tackle the game in bite-size chunks.

The driving mechanics are particularly worthy of praise. Although none of the roads are particularly challenging to navigate, driving is easy and functional with very basic physics, ensuring that the frequent road-trips are always at least somewhat enjoyable and never become a chore.

State of Decay just might be the least pretentious game I’ve ever played in terms of story. This is not a game about exploring emotions or the effects of loss on the human psyche. There’s barely even an introduction before the player is thrown right into the action. Exposition is practically non-existent; we learn about Lily’s illness and the Army’s poor treatment of civilians not in cutscenes, but in general conversation around the house, or in radio conversations during driving sections. The action is never stopped to tell a story, and the small snippets of storytelling that do take place serve only to enrich the game’s world and make the plight of the characters feel genuine and believable. It’s a shame, then, that the dialogue is so poorly written that it becomes unintentionally hilarious. Not only that, the same few stock phrases are constantly repeated, often within seconds of each other. It’s only a minor irritation, and very forgivable considering the insignificant role that story plays in the overall experience.

The world in which State of Decay takes place is another aspect that deserves considerable praise. It’s not as large and detailed as those found in many other sandbox games, consisting of a few small towns with a variety of surrounding mountains, fields and buildings. It is, however, a beautiful world that feels vibrant and vast, despite the clearly limited budget of the development team. The art design is conservative and simple, aiming to faithfully recreate the feel of an isolated countryside and mostly succeeding, let down only by the sub-par graphics.

In fact, State of Decay is something of a mess all-around, technically. I should let you know that if you’re the kind of player who demands flawless graphics and clean, glitch-free gameplay, State of Decay is absolutely not for you. The game has a very rough, unpolished feel to it. Character models will frequently clip into pieces of scenery, environment textures load in real-time before the player’s eyes and collision detection for melee combat is often woefully inaccurate. All in all, State of Decay feels unfinished, at best.

However, it is worth noting that such technical issues barely detract from the sheer fun of the game, if at all. As with games like Skyrim and Fallout: New Vegas, the game is highly enjoyable despite its technical shortcomings and they rarely, if ever, hinder the player’s immersion, or indeed their overall enjoyment of the game, in general. Given the obviously limited budget of the game, the developers chose to make the game fun to play instead of making it fun to look at, a decision that I appreciate wholeheartedly. State of Decay’s sound design is also excellent; much of the game is set to sparse piano, acoustic guitar and synthesiser, with the music only occasionally becoming louder and more frantic during tense action sequences. It’s nice to see a game use silence effectively, as many of the more isolated areas become all the more serene for their lack of music. It’s the absolute antithesis of Dead Space’s “electrocute an orchestra and hope for the best” approach, and stands as a prime example of horror sound design done right.

State of Decay is a fairly long game, taking roughly 10-12 hours to complete the main story missions. That’s without setting up all of the outposts, meeting all of the survivors, improving the house or dealing with all of the seemingly endlessly spawning infestations. There’s plenty to do in order to receive all of the achievements and complete the game 100% that will keep you playing long after the credits, should you wish.

State of Decay is a prime example of a game that is greater than the sum of its parts. Despite all of its flaws, it’s one of the most engrossing games I’ve played in quite some time, and easily ranks as one of the great horror games of this generation. Highly recommended!

State of Decay (Reviewed on Xbox 360)

State of Decay is a prime example of a game that is greater than the sum of its parts. Despite all of its flaws, it’s one of the most engrossing games I’ve played in quite some time, and easily ranks as one of the great horror games of this generation. Highly recommended!

State of Decay: Year One Survival Edition Coming To Xbox One

I really wanna play this game, however it's on Xbox 360 which makes it slightly less desirable for me. I think it's coming to PC will get it then.

It's already a fantastic game, but if it comes out on PC with improved graphics and less glitches it'll be absolutely mandatory xD

I gave the demo a go on the weekend but I've got to say, it didn't grasp me. I know it's going to be pretty simple to start with but I just legged it around making a lot of noise and smashing in zombie brains when they got too close.

Now that I think about it, I remember not liking the start all that much. I wanted to stop and go play Left 4 Dead or GTA4 IIRC. It should speak for the quality of the rest of the game that I'd completely forgotten about it by the time I wrote the review :D

Pretty much what Kaostic said but i'll give it another go and see if I can get into it.