I never played the first installment of this title, but its 2D platforming style reminds me of Golden Sun, a game I played well over a decade ago on the Game Boy Advance. There are some minor similarities between the two, but in terms of storyline and being able to delve deep underground, SteamWorld Dig 2 has far more going for it. Some gamers may already be familiar with the first game, as it has previously appeared as part of a PlayStation Plus offer. 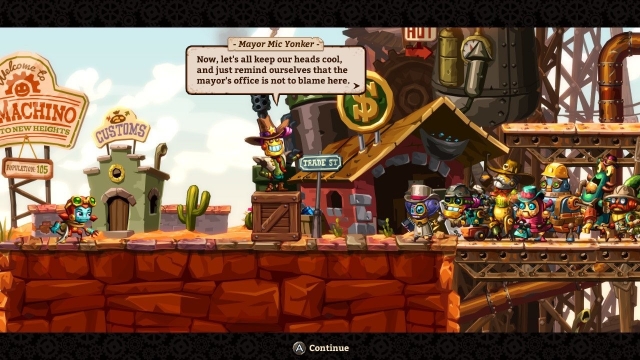 Rather than being set in a different universe SteamWorld Dig 2 acts as a sequel. You play as Dorothy, looking for her missing friend Rusty, who I’m led to believe was the protagonist in the first game. Along the way you'll encounter tricky paths to negotiate, quirky characters, and a whole host of enemies to defeat. Oh, and you’ll be using a trusty pickaxe quite a lot. The pickaxe allows you to dig deeper and find new areas; some blocks will take more hits before crumbling, and others simply will not budge. It’s important to know where you’re going, or you could miss out on hidden areas, or end up getting lost. Adding this into the game makes it more of a challenge, and makes you think about your next move very carefully.

It’ll likely take around six or seven hours to complete the game, slightly longer if, like me, you struggle with the digging - which is a pretty large portion of the game! It is a lot of fun burrowing a path under the ground, but there were many occasions I ended up lost and accidentally doubling back on myself, as certain areas of the tunnels can’t be differentiated from others. Having said that, once you get on the right pathway there are vast amounts of areas to discover, with twisting tunnels and hidden dangers aplenty. There are a number of really cool and unique boss fights, and defeating these will help you venture deeper underground. Well, that and the progression system, where you can exchange things like relics for points to enhance Dorothy. 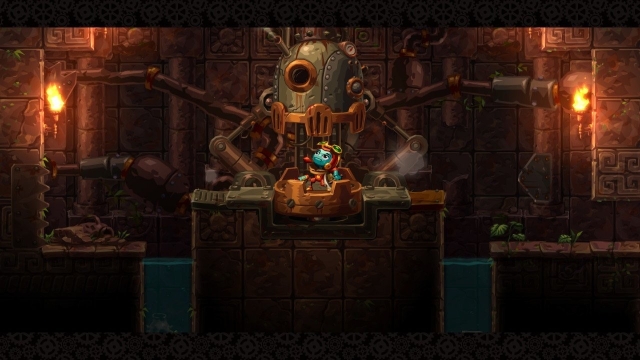 Bosses aren’t the only enemies you’ll need to navigate past, as defeating lesser enemies along the way can help you find new upgrades, weapons, or keep your torch lit. There are the occasional pools of water or flames that will help guide you through the trickier areas of the underground. In typical 2D side-scrolling fashion, defeating enemies and progressing to new areas will garner you XP points which can also be cashed in back above ground. After all, exploration is the name of this particular game.

The background visuals are superb, and far better and more vivid than I could have imagined. Playing the game handheld is fantastic enough, but playing it on a TV takes things up yet another level. Some of the characters you’ll meet along the way are full of personality, and they all feel as though they have great individuality about them. In summary, SteamWorld Dig 2 is a stellar addition to the Switch, and it’s a great throwback to the classic 2D platformers and side-scrollers of yesteryear. There’s more to the game than just the main story mode, and going off the beaten track to discover side quests, relics and other secrets is very rewarding. From the unique plot to the charming visuals, SteamWorld Dig 2 excels from the off. I especially loved the Western style music, which suits the theme of the game really well. Indie titles have been flooding onto the Switch since its release, and the highly-impressive nature of them has me excited to see what comes out next.

You mentioned nothing negative in your review, yet you've given it the lowest score of any review according to aggregates.