It’s been a few years since we had a half competent winter extreme sports game to play. The last SSX title, though mostly forgotten, was a pretty good attempt at modernizing the series but poor sales meant it was put on the shelf. Alternatively, one of my other favourite extreme sports series’, Skate, was also put on the shelf due to poor sales. Fortunately, Steep manages to tow the line pretty well between the two - but it’s not without its issues.

Steep is developed primarily by Ubisoft Annecy, a studio that has credits on all the best Splinter Cell titles and pretty much all of the main Assassin’s Creed games. So it’s fair to say I had fairly high expectations of Steep going into it. As with any Ubisoft release though, I still went in with a certain sense of trepidation. The last time I was promised a massive map with online features I ended up with The Division, a game that was initially fun before descending into a loop of fetch quests and loot hoarding.

Steep takes place in the Alps, a European mountain range found between France, Germany, Italy and loads of other countries that I can’t be bothered to Google. The game world is open to you from the start and after a few basic tutorial missions the multiplayer also opens up. Right from the start, the vast landscape is staggering. I’ve seen mountain ranges in other games, but they come nothing close to the stark natural beauty of Steep’s peaks. 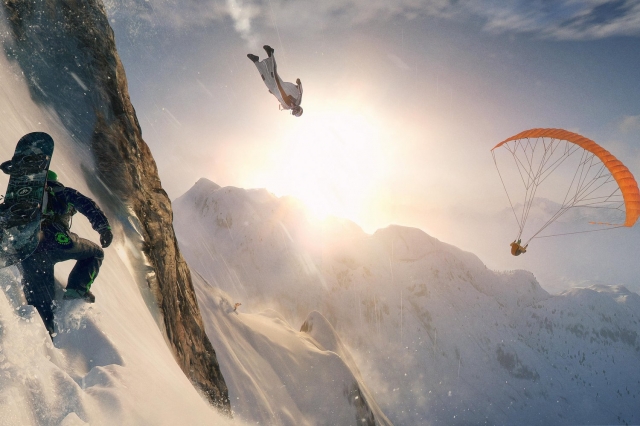 Gameplay revolves around four basic classes; snowboarding, skiing, wingsuits and paragliding. Snowboarding or skiing will be your most common form of transport around the world depending on your personal preference (pick snowboarding though as it looks way cooler). The wingsuit is generally reserved for challenges, as you won’t ever really need it for travelling. While the wingsuit is mostly redundant, on some of the challenges it is incredibly fun. This is where the paragliding falls short. The paraglider is incredibly awkward to use and forces players to rely on updrafts in order to gain verticality. The challenges for it are not fun and feel incredibly awkward compared to the rest of the game. Fortunately, the title makes up for poor paragliding with fun and responsive board and ski controls. It manages to fit perfectly between the arcadey controls of SSX titles and the simulation feel of Skate. It’s a hard balance to hit and one that some people likely won’t enjoy.

One thing Steep absolutely nails is the sense of speed athletes achieve when riding down the side of a mountain. Trees and rocks zoom past as your rider hits breakneck speed, because of this the snow becomes much more difficult to accurately predict, increasing your chances of crashing. Many of the races often involve finding a balance between committing to absolute speed and losing control, or reducing how fast your player is moving for the sake of movement. It’s a nice system that incorporates an element of risk and reward.

There’s a lot of product placement in Steep, so much so that it does feel like you are being advertised to - something I’m not to keep on when you spend £50 on a game. RedBull and GoPro are the most prevalent sponsors, with Red Bull being slapped all over the place and GoPro having a camera mode in the game. The GoPro camera mode is essentially first person, it’s there for those people that want to vomit during their play time. Fortunately you can swap to it in the replay modes that are available. Which works well if you want to look really cool. 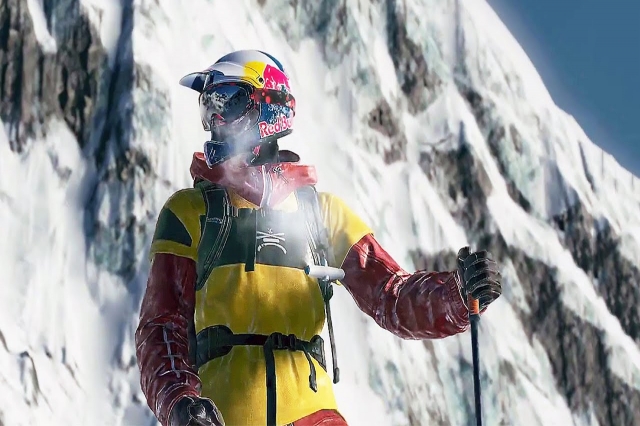 There’s a somewhat thin story available within the world, which is told through the mountains that players traverse. Each mountain has a distinct personality and the voice actors portray this. It’s all a bit cheesy and completely misses the mark considering the developers were going for some sense of simulation. It feels like a mode that was added late into development, probably due to a lack of direction in the title. The voice acting is pretty passable and I found myself skipping the cutscenes later on in the game. The story missions are usually quite fun though and involve something a little different from the challenges scattered around the map.

The multiplayer works much like the recent Need For Speed games. Players are placed into an online lobby where they can play the entire game single player if they wish, but their world will be populated with other human players also on the same server. Whilst traversing the mountains, players can choose to invite players they meet with the touch of a button - this enables players to start a group. Groups makes players more visible to one another, but it also lets players set down real time challenges for the people they are playing with. It’s a simple system but one that can be surprisingly addictive, especially when you are playing with some close friends and you absolutely have to beat their score. The multiplayer feels like it’s missing something though. There’s a noticeable lack of pvp available for players, the leaderboards are fun but some dedicated pvp modes would be fun. I hope this something that could be added post-launch, but I haven’t got my hopes up - it is Ubisoft after all.

Outside of the multiplayer, Steep has challenges scattered across the various peaks. This is somewhat similar to the way that Skate works. Players can compete for bronze,silver or gold on a challenge as well as any times or scores set by friends. The challenges vary in difficulty depending on the mountain they are on and how highly ranked the player is. Challenges open up as they player builds their rank, along with unlockable clothing and equipment. It’s a shame that the clothes and equipment offer no form of upgrade to your character, with everything that unlocks being a purely aesthetic addition.

There are several play styles that your character will be assigned to depending on how you play Steep. Players can fall into: Bone Collector, Explorer, Free Rider, Freestyler, Extreme Rider and Pro Rider. Most of them are fairly ambiguous to be honest and will be earnt through general gameplay, but it’s nice to see which area you tend to fall in. Steep is probably one of the best looking games to release so far during this console generation. The snow is incredible; it reacts realistically to player movements and the tracks players leave in the snow will remain until snowed over again. The mountain ranges look realistically huge and draw distance is handled incredibly well. Playing Steep is similar to being the first person to tread in untouched snow, there’s a quaint joy to be had snowboarding on untouched fresh snow.

I was a bit sceptical about Steep’s long term appeal, but I’ve played about 30 hours so far and I’ve not found myself bored yet. The appeal of improving on my scores feels like one that will last quite a while and serves as a great motivation when I dip in and out of the title. The lack of multiplayer variety is a little poor, the real lack of serious realtime pvp options leaves me wanting more. Fortunately Steep is a whole lot of fun when you are just riding around on your own, exploring the excellent world that Ubisoft Annecy have crafted - it’s even better when you add your own soundtrack via Spotify.

Steep is a solid experience that accomplishes what the developers set out to do. They have a created an impressive world that is both fun to explore and addictive to conquer. The multiplayer feels like a bit of a letdown due to a lack of variety but it is still fun exploring the world with friends. As long as your expectations are not to… steep, I think you will enjoy this open world extreme winter sports game.

Steep is a solid experience that accomplishes what the developers set out to do. They have a created an impressive world that is both fun to explore and addictive to conquer. The multiplayer feels like a bit of a letdown due to a lack of variety but it is still fun exploring the world with friends

PlayStation Plus Games For January 2019 Announced

World Tour Tournament for Steep Ushered in by Update