“Whether you time travel or time leap, you can’t go back and change the result of the past”. Spoken during the opening scene, that line stuck with me through my playthrough of STEINS;GATE 0. It more or less sums up the plot and puts everything you try and do in it into perspective. At the end of the day everything that happens is predetermined and no number of switching time-lines, changing conversations or hiding information will alter the end result.

Essentially a branch out of Steins;Gate, STEINS;GATE 0 takes place about halfway through the story of the original, opening when our protagonist Okarin arrives in the Beta World Line after failing to save the women he loves, Kurisu, from death in the Alpha line. You see, the world of the Steins;Gate games is about the advancement of science and technology, with focus being on a battle between companies striving for control of time machines and with it, the ability to stop World War III. 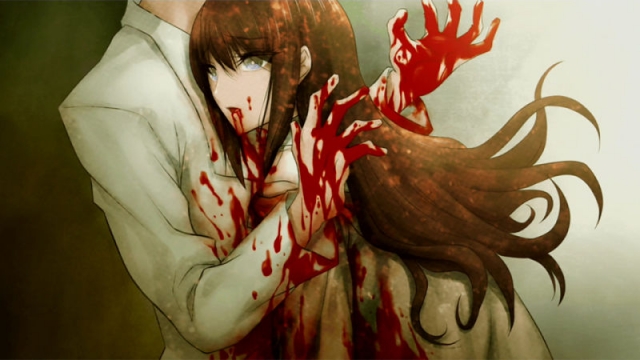 Everything seems to point towards the death of Kurisu being a drastically important event across both time-lines. As the brains behind the idea of time-travel her life somehow connects the two world lines and it is up to Okarin to try and prevent her death. There’s much more to it than just that though, which makes the latter parts of STEINS;GATE 0particularly difficult to follow. Without having any prior knowledge of the original, you are plunged into a story already 20+ hours in, characters are already developed and mention story nodes that have a long passed without any significant details. It all prevents you from getting the full immersion and is comparable to starting The Lord of The Rings halfway through The Two Towers.

That being said, STEINS;GATE 0 is filled with jaw dropping moments, dramatic plot twists and a great insight into the human mind that do stand aside from the continuing story-arc. Okarin is one of the most complex characters I have come across recently and the chapters from his point of view are often the most interesting. Battling with grief, PTSD and symptoms from his leaps across time, his internal dialogue and how he speaks to his friends couldn’t be more different, highlighting the fragility of his mind. To add to his mental uncertainty, he unwillingly becomes a tester for an AI version of Kurisu, a new project announced at a university lecture he attended that stores the memories of the woman killed in the Alpha world line. Being a visual novel there are few interactions aside from story absorption, but the most poignant moments involve the choice of conversations when chatting to the AI Kurisu on your smart-phone. The internal struggle as Okarin balances grief and research is evident as time after time you’re faced with a decision. Do you continue to talk to the app despite knowing that Kurisu might never join you in the real world again, or be stubborn, refuse to answer her questions and never recover from your grief? It’s an interesting take on the future of AI and hits similar notes to the Joaquin Phoenix film Her.

For all of the epic moments of world lines beginning to blur, shoot-outs in underground car parks and the apocalypse of WWIII, STEINS;GATE 0 comes with a lot of filler and, what at times felt like unnecessary story beats. Again, this could be down to my lack of knowledge of the original and time spent with key characters but just as things looked to be speeding up, STEINS;GATE 0 would slam on the brakes and you’d spend the next hour in the market talking about cosplay, or attending a christmas party. It really altered the pace for me, and I felt at times it was holding back from a really interesting story. It’s tough to recommend STEINS;GATE 0 as a stand alone game. The experience as a whole is much more beneficial if you are already familiar with the characters and story beats from the original. That being said though, if visual novels are your thing, it offers a highly interesting and in-depth story with real emotion and heart. Though there’s times where the narrative went off track to dull scenario or boring environment, once it kicked back into gear, you’ll want to find out what’s around the corner.

With an intense and intriguing narrative, Steins;Gate 0 is a joy to play through though too many times the story slows down for sometime much more mundane. Without knowledge of the characters or larger plot of previous games, you may struggle to get the full experience.

I can see the parts that slow down plot progression as a negative, but the part in the summary at the end stating this:

"Without knowledge of the characters or larger plot of previous games, you may struggle to get the full experience."

should have never been an issue, considerin this is a game not meant to be played without playing the original VN in the first place.

Hey mate. Thanks for the comment. My stance on that and the reason I thought I ought to mention it was becuase simply I hadn't played the original Steins;Gate.

It's a very complicated universe and after reading up on the first one before beginning the review it opened my eyes to the wider story - loads had happened. A lot has gone on that all the characters refer to and while you could get away with understanding the story, I think you would get more from it having a better knowledge of the original.

If I'm new to the franchise, why would I NOT play game 0 first? Surely it takes place before any other game, so is the best entry point to the series.

I guess that would be a good enough reason for it.  It also seems like not many even pay attention, either, though, considering the other comment by Acelister. The game was clearly advertised as a sequel to the original Steins;Gate, though it may not have have advertised as a direct sequel. In the end, this is a sequel that explains what happened in the future, leading up to the True end of the original game, which makes some people think it is a prequel and think that it should be played first. The naming of the title even seems to imply this by adding 0 to the title instead of 2, but that is how the semicolon series is (which includes Steins;Gate, Chaos;Head, Robotics;Notes, and now Chaos;Child, though they are mostly only loosely connected).

Well, as Ace mentioned 0 makes it seem like it should be the beginning, but the sheer nature of time-travel and time-line hopping makes the whole sequel/prequel thing pretty confusing.

Essentially, 0 refers to what Okarin wants - he needs to get back to point 0 in order to restore everything!

0 is a squel not prequel. You want to play original Steins;Gate first